Today’s Card of the Day comes from the 1976 Kellogg’s set. It’s our first time featuring this set since we had Manny Sanguillen here in March of 2021, so it’s been quite some time. This is the third time for Jerry Reuss in this series. He appeared here in 2021 on his birthday, and then a second time on the anniversary of the day the Pittsburgh Pirates traded catcher Milt May to acquire him. His third appearance in this series marks the anniversary of the day the Pirates signed him in 1990, in what ended up being his final big league season.

These Kellogg’s cards came inside specially marked boxes of cereal during the 1970s and early 1980s. The 1976 set includes four players from the Pirates, so this articles marks the halfway point for the set. You can bet at some point down the line we will look at the Willie Stargell and Dave Parker cards. For now, we look at the card of Jerry Reuss, #43 in the 57-card set. 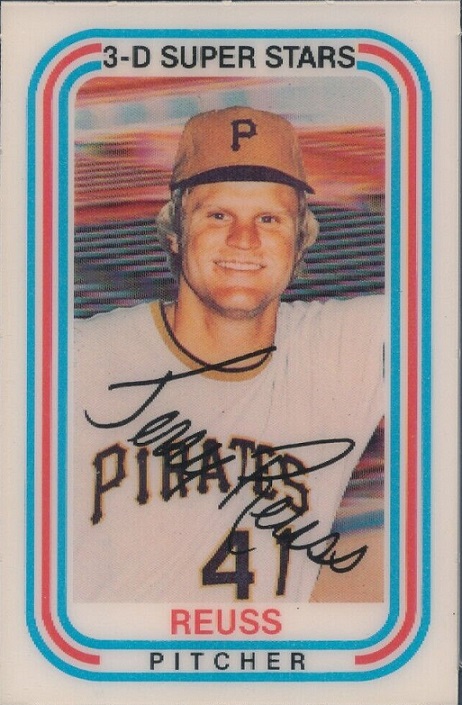 These cards from Kellogg’s are smaller than the normal cards you find today. The also have a 3-D effect as you tilt the card back and forth. They always went with just a last name on the fronts of these cards, but they also included that facsimile autograph, back when you could read autographs from players.

I only have a handful of Kellogg’s cards from over the years, which is a bit surprising because I really like the looks of some of them and they are fairly cheap compared to regular issued cards from Topps. That being said, the 1976 set design is in the running for my least favorite one, though I give them credit that year for not using the blue photo border that you can find for so many other years. You really have to be an expert in these sets to be able to tell them apart by the front design. 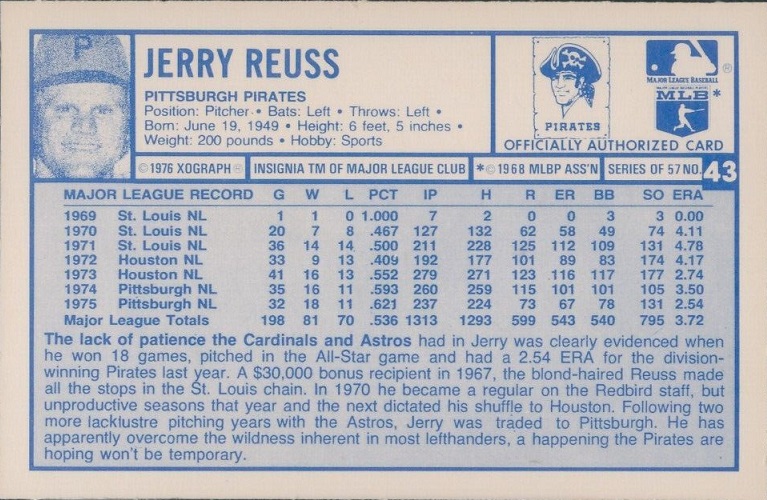 The back has a second photo, though it’s the same photo as the front, just cropped different. Despite the fact that it’s in blue, you have to like the addition of the old Pirates logo. Kellogg’s went with just big league stats here, but that left room for a lot of bio info. It’s funny how they say that both St Louis and Houston were impatient with him when his 1973 season was just as good as the 1975 season that they use as the reason they shouldn’t have let him go…or was it? That 2.74 ERA in 279 innings you see for his 1973 stat line was actually a 3.74 ERA. It’s only off by one, but that is quite a difference (it isn’t a corrected error, so there’s no extra value). For comparison, his WAR for his 1975 season is 5.2, which is his career best. That 1973 season was worth 3.0 WAR, his seventh best season. As a former lefty pitcher in little league and high school, I take offense at that jab at lefties being wild.

If you would like to purchase this card, then I believe I can help. There’s a website called Ebay, where they sell millions of baseball cards. Due to competition between sellers on that site, it helps keep the prices down on cards that aren’t extremely rare. This Reuss card has 26 current auctions and eight closed auctions in the last three months. There have been two PSA 10 copies that have sold during that time and they were both just over $25 delivered. However, someone also paid $44 for a PSA 10. Because of the heavy stock of these cards, it’s easier to find them in high grade. Ungraded copies sell for under $8 delivered, and there have been a few recently that went for around $2-$3 each.

As for the active auctions, one person has a PSA 10 for an insane price, while another can be had for about $33. A PSA 9 has a best offer on a price that is already under $20 delivered. There are also a number of auctions in the $2-$3 range if you don’t care about graded cards. Just check the scans for cracking. These cards had a tendency to warp over time and that could cause cracking on the front.