There have been four former Pittsburgh Pirates born on July 6th and the other three have already appeared in this series, two of them showing up multiple times. The fourth player is the one you see in the title, Omar Olivares. He was a 33-year-old veteran pitcher by the time he joined the Pirates in 2001 at the end of Spring Training, coming over from the Oakland A’s for a player to be named later, which I believe that we are still waiting on to hear that name.

The 2001 season would end up being the last of his 12-year big league career, and Olivares struggled as a starter and reliever, going 6-9, 6.55 in 110 innings over 12 starts and 33 relief appearances. Today is his 55th birthday, so only happy thoughts for the day, as we take a look at his 2002 Topps card. As a second checked box, this is the first time that we have used the 2002 Topps set. I’ve used other sets by Topps from 2002 before, but this is the first appearances of the regular base set. 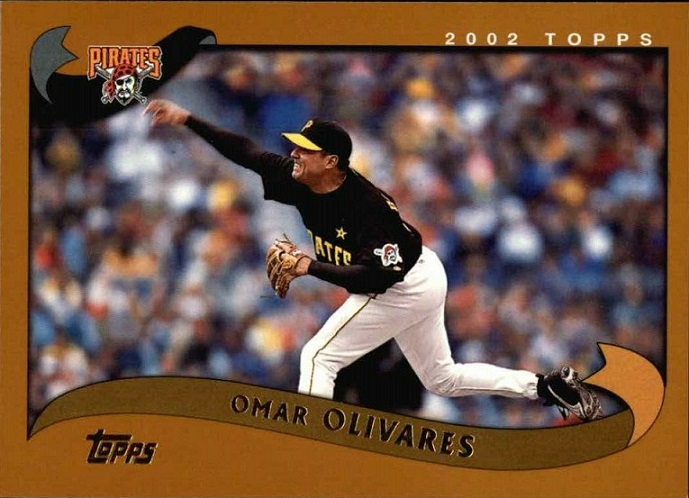 The first thing I’ll point out here is that most of the cards in the 2002 Topps set have the vertical card layout. I prefer the horizontal pose for photos like this one. If you tried to put this on a vertical layout, either the photo part of him would be extremely small, or they would cut off some body parts to get it into the photo portion of the card. I love that intense look on Olivares as he delivers the pitch, and the blurry hand captures the action part of the photo.

I am partial to those jerseys. I prefer the black bill for the cap, but that look is acceptable. The patch on the sleeve is great, and right above the E in Pirates is something special that tells you this photo was from 2001 (even without knowing Olivares was only there for that season). That was a memorial patch (A Stargell Star) worn for Willie Stargell, who passed away on Opening Day of PNC Park.

As for the card design, I like some things, but I’m not a fan of that color. It looks a lot like an insert card color, like this should have a number on the back (something like 072/150) for the copper version of the regular card. The ribbon look for the name and top corner, as well as identifying the set name on the front of the card, both add a nice touch. Any time you can get the team logo on the front, you get some extra points. 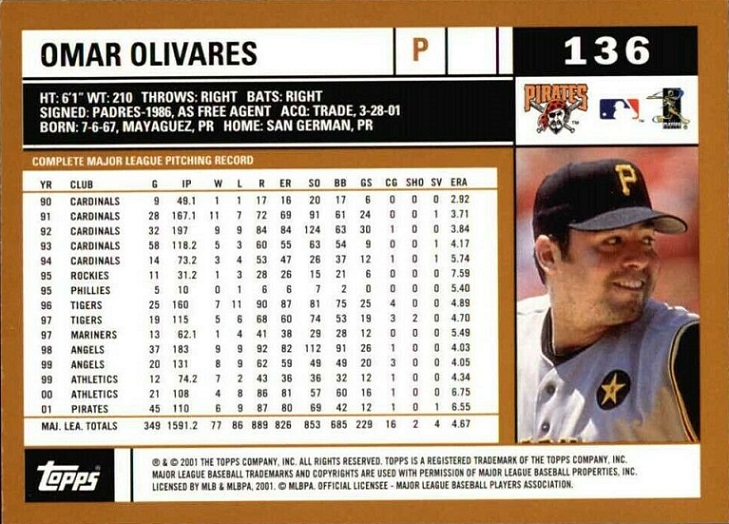 I’m a fan of the backs of these cards. The stats are small, so they’re going to be hard to read, but using black and white for that section helps a lot. What you’re looking at there is his entire big league career. The added second photo is great because you get a different angle, plus the jersey and hat are both different. Then Topps went all in for brownie points by adding a second Pirates logo on the back. Well done. For a second I thought the “P” next to his name was the same as the one on the cap, but I quickly realized it stood for pitcher.

If you’re interested in picking up this card, you have more than just the regular base card as an option. There’s a chrome version, a gold chrome refractor version, and a gold version, with the latter being numbered to 2,002 copies. There’s also one that has the words “limited edition” stamped on the front and another that has “home team advantages” on front. All told, there are 42 auctions for this card. The most expensive is $9 for the gold chrome refractor, and most of that charge is shipping. You can get the base card, gold and chrome all for under $2 each delivered.