The Pittsburgh Pirates were doing just fine in 1990, starting a three-year run on National League East titles. They were set at every position and even had some pretty good platoon situations during that time. That lineup strength allowed them to trade outfield prospect Moises Alou to the Montreal Expos for pitching help in the form of Zane Smith. The Pirates paid a heavy price for Smith, but they were also going for their first pennant in 11 years, so they paid up. They did fine without Alou during that run, and he didn’t break out until the shortened 1994 season when he put up 5.1 WAR and the Pirates were bad enough that he wouldn’t have helped them anyway. He ended up with 40 WAR over his 17-year career, so overall he was an extremely strong player.

For reference, just 14 players have put up a better WAR than Alou if you only count their time with the Pirates. Anyone who knows the Pirates knows that they wouldn’t have kept Alou 17 years (it was actually 19 years because he missed two full seasons), but they could have got a nice trade haul for him in 1995 or 1996. He reached free agency in that latter season. The Smith-Alou deal is a trade that worked short-term, probably wouldn’t have changed much long-term, but would have been better off if they moved another prospect instead. At the very least, he would have made some bad seasons a little more enjoyable.

Alou was a known prospect when the Pirates traded him. He even came from a great baseball family, so he would have been drawing attention even if he wasn’t a top prospect. Pirates fans knew him because he was the second overall pick in the 1986 January baseball draft. Before he was traded to Montreal, he played two games for the Pirates. Before those games, he appeared in a handful of baseball card sets that show him with the Pirates, including the 1990 Fleer set. Alou didn’t ride solo on this card. He was accompanied by pitcher Chuck McElroy of the Philadelphia Phillies. Here’s a look at card #650 from that set, feature Alou and McElroy. 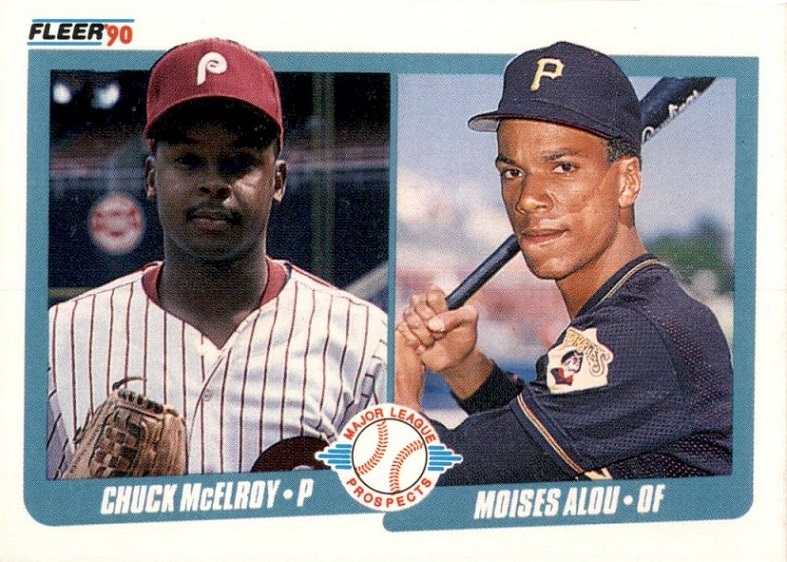 The 1990 Fleer set was popular when it came out, but every set was popular back then because it was the early/middle part of the card boom. There are a lot of these cards still floating around in collections, as you will see in the pricing section below. This set had three things you don’t see on this card (or any other “Major League Prospects” card in the set). Almost all of the other card in the set have a vertical layout for the photo, while these cards go horizontal. Regular cards also use the team color in the photo border design. That would have been a little difficult here with the Phillies using red and the Pirates getting yellow/gold borders. The other thing missing here is something they could have included. Fleer put team logos on the front. No reason they couldn’t have put them here in the corner of the photos. Luckily with Alou, you get the logo there on the sleeve patch. 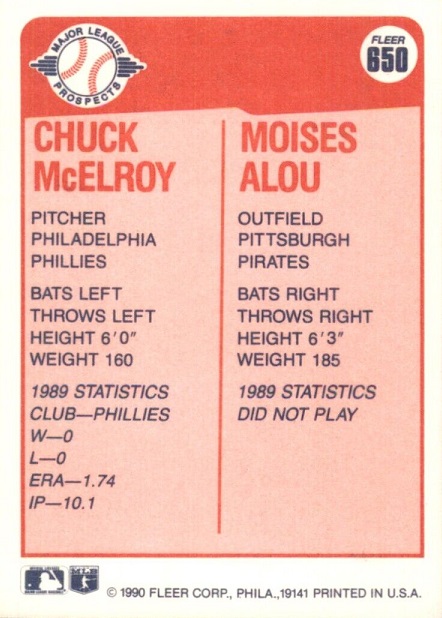 You didn’t get a lot of new info about Alou from the back of this card. We already knew from the front that he was a Pirates outfielder and he is batting right-handed. Sure he could have been a switch-hitter, but even with that info, all the new stuff you get is his height and weight and throwing hand. They gave you nothing for stats, not even his minor league stats as a substitute. It’s not like they went in depth with stats for McElroy. He was in the majors briefly in 1989 and they went with four pitching categories, two of them having zeros for the number. The “Major League Prospects” logo from the front is also on the back.

As I hinted above, these cards are plentiful. That’s good for you if you want one, or two or 276. That last number is how many active auctions there are on Ebay for this card. In the last three months, there have been 11 sold auctions for this card. At that rate, if no new ones were listed, those Ebay auctions would sell out in December of 2030. That’s good news for you, because there are a ton (literally 2,000 pounds) of sellers who have this card for under $2 delivered, and that’s including the sales tax part I so often forget.