I recently talked about how we have already featured most of the former Pittsburgh Pirates players with the last name Brown. That was after I used Adrian Brown in an article, then I knocked out Brant Brown and Mike Brown fairly quickly afterwards. That left us with only three players out of nine total with the last name Brown to not be featured here. I mentioned that day that I couldn’t find cards of two of the players with the Pirates, and another I’d be able to include him if I stretched the definition of “card”.

If you’re into collecting baseball cards, especially older cards, it’s just easier to group everything together than it is to do what I’m doing right now. I have old baseball card price guides that include things like pins, newspaper supplements, pieces of fabric, pieces of leather and whatever else they could get a baseball player image on. They’re all grouped together into a baseball card price guide. So here’s my stretch of the definition of the word “card” by including 1922 Pirates pitcher Myrl Brown on a 1922-23 Kolb’s Mothers Bread pin.

Here’s the front of the card/pin: 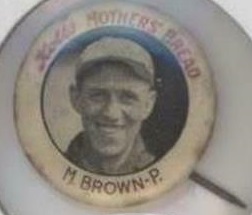 It’s a bit hard to read, but this was the best scan I could get for Brown. It says “Kolb’s Mothers’ Bread” across the top in red letters. I’m not sure why I never see that apostrophe at the end of Mothers when people mention the set, but it’s there on the pin. At the bottom you see “M.Brown-P.” which makes me wonder if any people back then thought it was Hall of Fame pitcher Mordecai Brown. He’s better known now as Three-Fingers Brown, but more people back then either knew him by his first name or the nickname Miner Brown, so it works with either of those names. He was retired by then, but this set had Hall of Fame pitcher Chief Bender included, and he last pitched in the majors in 1917 (he came back for one game in 1925, but obviously no one in 1922-23 knew that).

Myrl Brown was a member of the Reading Aces of the Double-A International League during the 1919-22 seasons, before joining the Pirates for his entire seven-game big league career in 1922. I mentioned the Reading Aces because all 25 players in this set were members of that team. That makes it a regional issue and these pins are extremely scarce because they weren’t made for large distribution. 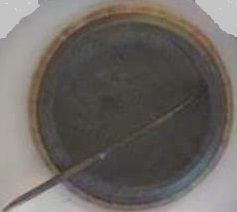 There’s not much to talk about here. Have you ever seen the back of a pin? Yeah, me too. There are old pins that have ads on the back, but there’s nothing here to see. However, this particular pin is just missing the back ad. I wanted to include this scan because it goes with the front scan, which matters when you see the pricing section. That being said, we can still look at the ad on the back from a different scan, so here’s that different scan… 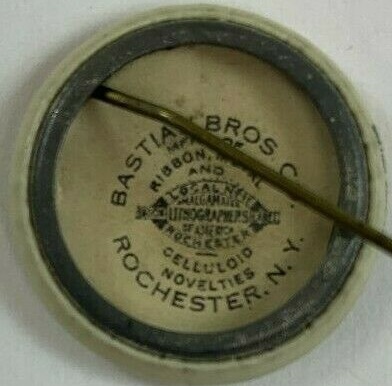 As you might be able to tell, it’s just an ad for the company that made the pins for Kolb’s Mothers Bread.

If you’re interested in this pin, you have one option on Ebay and you’re looking at the scan of it above. The seller is asking $290.78, plus shipping/tax. I don’t know why it’s priced that high, but most pins from this set are for sale for $40-$65 each in better shape than this one. They have also sold for less in normal auction style listings. The Chief Bender pin is worth the most, but even that has sold recently for $100. There’s a pin labeled “J.Kelley” who some people have mistake for the Hall of Famer Joe Kelley, but it’s a pitcher named Joe Kelly and his last name is spelled wrong on the pin. Don’t pay extra for that one.