It would have been nice if I could have waited longer to post a Card of the Day article for 1968 Pittsburgh Pirates pitcher Dave Wickersham. Sadly, he passed away recently at the age of 86, so I penciled him in for the next open day on the schedule. Part of the reason he hasn’t been here before is his short time with the team. He had a nice big league career, but he was with the Pirates for one season, and not even a full calendar year with the club. He joined the Pirates on November 28, 1967 in a trade for Dennis Ribant. He was sold to the expansion Kansas City Royals on October 21, 1968.

The reason I wanted to wait on his card has very little to do with him. I’ve featured plenty of players who had less time or did less in their time with the Pirates. The reason is that his only Topps cards with the Pirates used a trick from Topps that once you see it on one player, you notice it on every player who has the same thing happen. Let’s get right into our look at card #288 in the 1968 Topps set featuring Dave Wickersham, so you can see Topps trickery at work. 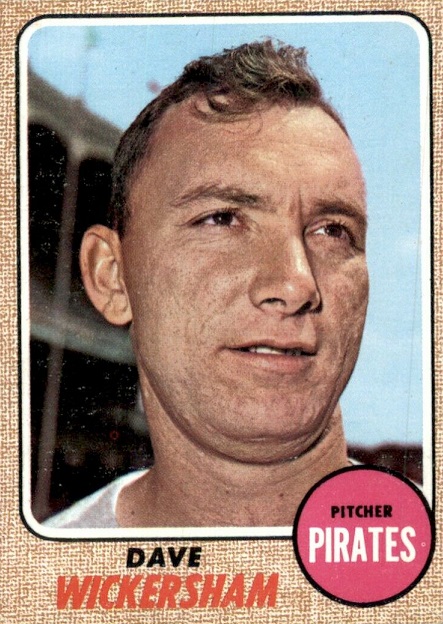 There it is, Dave Wickersham, pitcher for the Pirates. He isn’t being shown in a Pirates uniform there because they didn’t have a photo of him with the Pirates yet. Whenever that happened, Topps would do one of two things. The first is airbrushing the photo, and that sometimes looked ridiculous. Other times it was passable if you didn’t study the card closely. The other thing they did, which was smart thinking ahead of time, was get a photo of a player without a hat. They then cropped the photo really close, so nothing noticeable was showing on the uniform, eliminating the need to airbrush. So you’re looking at a photo of Wickersham on the Tigers, taken at Yankees Stadium, and then tightly cropped so there’s no sign of him being with the Tigers.

I personally prefer action shots on baseball cards. Staged action cards are a perfectly fine substitute, followed by portrait shots in full uniform, hat included, and some uniform showing is preferred.  These switch jobs by Topps are my least favorite, except for maybe the floating head cards (if you don’t know, you might not want to). I understand the reasoning and appreciate it for players like Wickersham, who otherwise wouldn’t have a Pirates card, but I can still not like it. It’s called begrudging acceptance. 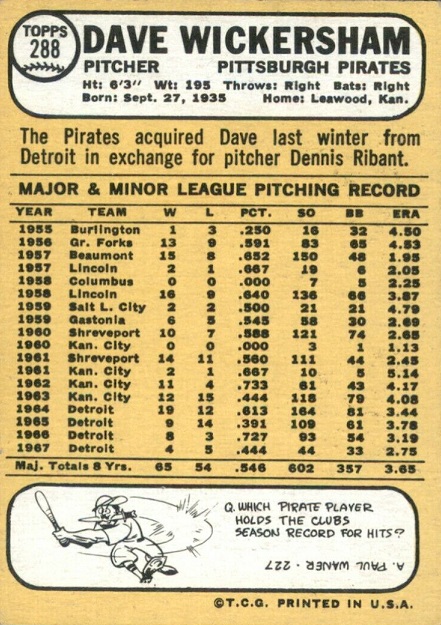 Bravo Topps for including all of his pro stats, even though he was in his eighth season of the majors already. Eight seasons of stats would have been plenty, but they went all out. Sure they only had six categories of stats and one was just a summary of two other stats, but that’s what cards did back then. The trivia question answer is still the same to this day, except Topps didn’t give him enough credit. The actual hit total was 237. Topps also did fans another solid above the stats by explaining a bit why this card says that he’s on the Pirates despite no Pirates stats.

If you’re interested in this card, then you’ll be happy to know that there are plenty of options on Ebay. You have over 200 auctions to choose from, and the most expensive one is $64 with a best offer for a PSA 9. There’s another PSA 9 for only $37, so that first one is a bit pricey, even if you can get it down some. I don’t know if this is a good price because I don’t collect high grade older cards and there’s no comparison piece, but I do know that and SGC 9.5 can be had for $40. Finding a card graded a 10 from 1968 is difficult for individual players, so you’d have trouble finding one in better shape. If you just want a cheap one that looks decent, then you should pay about $3 delivered. There are some cheaper, but you might not like the condition.