In July of 2005, Upper Deck bought the Fleer name and released cards for a short time (2006-07) under the name, using previous set names such as Fleer Ultra. The timing of this set allowed them to get Sean Casey pictured on the Pittsburgh Pirates, where he spent four months of the 2006 season. These cards were being distributed for the first time in June of 2006, so many people were getting this card in packs after Casey was already traded to the Detroit Tigers. Here’s a look at card #144 from that Fleer Ultra set. 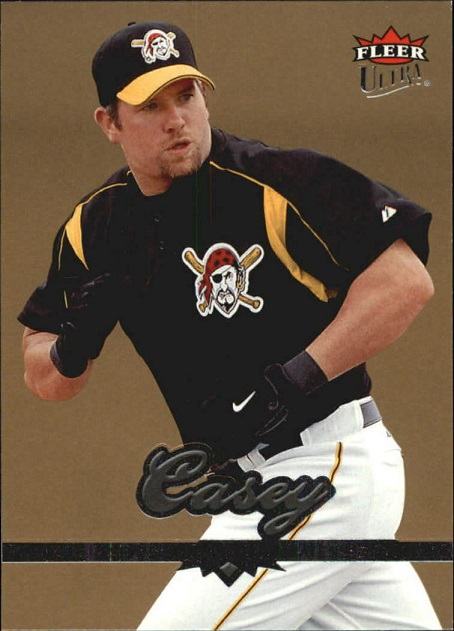 As the title mentions, this is the Gold Medallion version of this card. The regular 2006 Fleer Ultra card, which is easier to find because it was printed in a much larger quantity, has what looks to be a blurry outfield wall pictured behind Sean Casey. Basically, it’s a normal photo from a game, just focused on him. The Gold Medallion version of these cards took away the normal background and added this solid gold background for every card.

This card looks like it just lists his last name, but believe it or not, there is writing in that strip under his name. No lie, it actually reads “Sean Casey 1B Pirates” in that strip. I have no idea why they thought that was a good idea to write something in almost the same color.

I’m not a huge fan of that hat, but I do like that Pirates logo on it, and how it is bigger on the jersey. They need to bring something like that back because the current logo is zzzzz….boring. 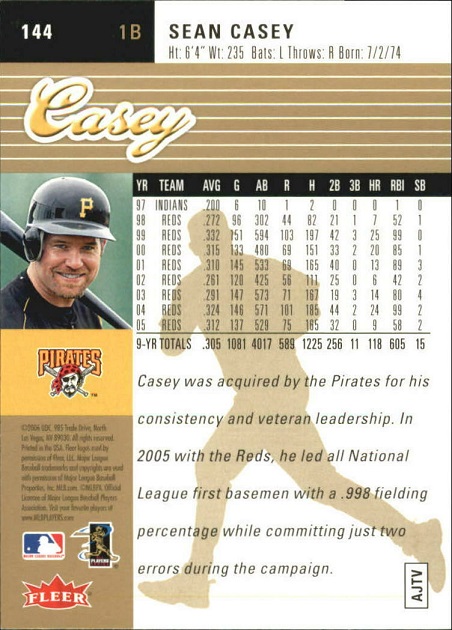 The shadow photo is the same as the front photo. I don’t know if I would have noticed that if I couldn’t see the front and back at the same time. I missed it in the 2002 Fleer Tradition set until I saw the scans next to each other. This back is different than the regular set in that everything you see here that is sand color is silver/gray on the regular cards. Fleer/Upper Deck continued the last name trend from the front, seen just above the stat section.

They went with limited statistical categories and left off the minor league stats, which knocks off two points for me. However they get those two points back by including the Pirates logo. They also add a second photo for Casey, which is different from the front photo. You would think that different photos should be obvious, but there are a few sets on these that we have covered, where the picture is the same front and back.

If you’re interested in this card, you can find the Gold Medallion version for about $3 delivered from three sellers. It’s actually just as easy to find that one on Ebay as it is to find the regular version of the card. Some of the latter are actually more expensive (due to high shipping), though there are $2-$3 options as well.