Today’s Card of the Day subject doesn’t match up to any of the players in today’s history article, which occasionally happens here. However, it was inspired a bit by the history article. I recapped a 1921 trade in that article, but one of those players (Elmer Ponder) has already been in a Card of the Day article, and the other (Dave Robertson) doesn’t have any options available showing him with the Pirates. So instead I just decided to use a 1921 card and I came up with the E253 Oxford Confectionery card of Max Carey by perusing through “1921 Pirates” search results on Ebay. It has been 14 months since Carey has appeared here on his own card (he shared one with another player), so that’s too long for one of the team’s all-time greats. Here’s a look at this interesting 1921 card. 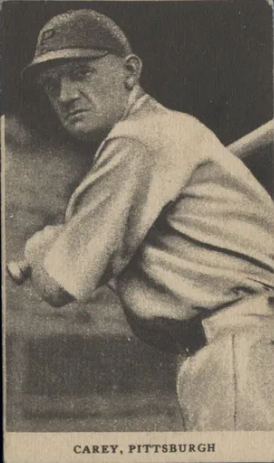 There wasn’t a lot of design thought that went into these cards. The photo quality wasn’t the best and the only thing besides the photo was that white strip at the bottom, where they put the player’s last name and the city of the team. That was a fairly common practice back then, and these cards are somewhat similar to the iconic T206 set in that regard. Actually, team nicknames (aka the Pirates) were rarely used back then on cards because they were just that, nicknames. Despite the relatively simple look, these cards are quite popular, which I’ll tell more about after we see the back…. 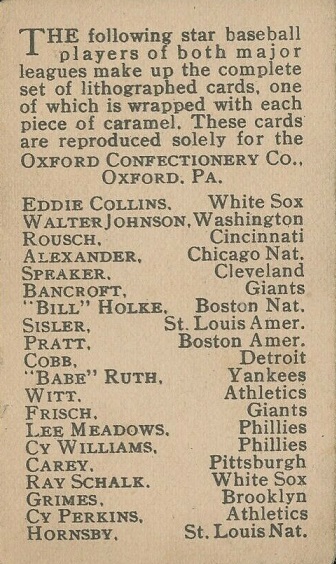 It’s a bit funny that so little was put into the look of the front of the card, but the back has so much information. That information tells you two reasons why this set is popular. Let me start by listing the group that encompasses the first reason: Eddie Collins, Walter Johnson, Ed Roush (spelled wrong on the card), Grover Alexander, Tris Speaker, Dave Bancroft, George Sisler, Ty Cobb, Babe Ruth, Frankie Frisch, Max Carey, Ray Schalk, Burleigh Grimes and Rogers Hornsby. This set of 20 cards has 14 Hall of Famers! Among those 14 are Johnson, Ruth and Cobb, who are huge among the collecting community, not that any Hall of Famer doesn’t draw attention, but those three take it to another level.

If you go back to what I said about the front and city names, you’ll see that the back only sort of follows that model. However, the back here really goes in different directions. For some towns with two teams, it separates them by “Amer” for American League and “Nat” for National League. Then it has Yankees/Giants, Phillies/Athletics instead for New York and Philadelphia, but then look at Collins and Alexander up top. They went White Sox for one and Nat for the Cubs. Some players have first names, some don’t. Plus you also have the Roush spelling error. This list looks like the person who had the final say before printing just used the rough draft instead, like someone scribbled the info down short-hand and they went with it.

None of that stuff takes away from the value and intrigue of these cards, which measure 1-5/8” x 2-3/4” in size. There are 15 cards from this set on Ebay right now and only two sold auctions in the last three months. That means multiple players from this set haven’t been available for sale recently on Ebay. This is a set that you might be able to find easier if you follow auction houses. Assuming for a second that you’re only interested in the price of the Carey card, then there’s one example on Ebay right now. It’s graded PSA 2.5 and the seller is asking $600 with a best offer option.