Once again I’m using a different card than my first choice because I couldn’t find an acceptable scan, but I’m okay with that happening. That’s because it has been two years (July 2, 2020) since I used the 2009 Topps Heritage set in our Card of the Day series. That time it was Jack Wilson, and this time we are going with Joel Hanrahan, who the Pittsburgh Pirates acquired from the Washington Nationals on this date in 2009.

There’s an interesting tie-in with those two players in this set. The Heritage set was split into two series, with the high numbered cards being released later in the year. Wilson appeared in the low numbered series with the Pirates, then got a second card in the high number part of the set after he was traded to the Seattle Mariners. Hanrahan wasn’t part of the low number cards, so he only appeared with the Pirates in this set. Here’s a look at that card, which is #606 in the set. Fans of the early Topps sets will recognize the card design immediately. 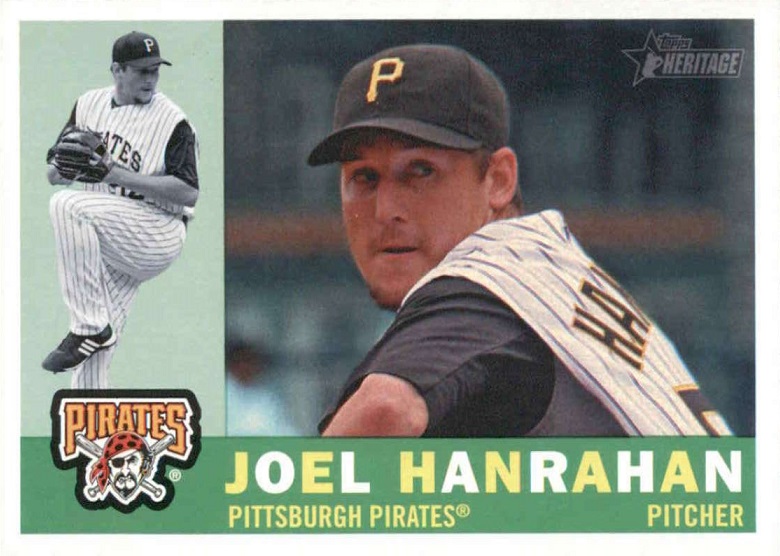 This design here is based off of the 1960 Topps set. They do an odd thing with the Heritage set, reusing designs 49 years later (the 2010 set used 1961, 2011 used 1962, and so on). They really didn’t change anything from the 1960 idea to here. Obviously the Pirates logo is different, but other than that, the only real difference is the Heritage logo in the top right. On a much smaller scale, the “R in a circle” next to the team name and logo weren’t necessary in 1960, so those don’t appear on the older cards.

The smaller photo on the left with a solid one-color background is the same, as is using a different photo with the normal background for the bigger photo. The 1960 set didn’t have any actual game action shots like this one. They used staged action. The alternating colors for the player’s name is also the same. Topps didn’t have specific colors for each team on the cards, so not all Pirates players have this same color combo. You can check the link above for a look at a different color. 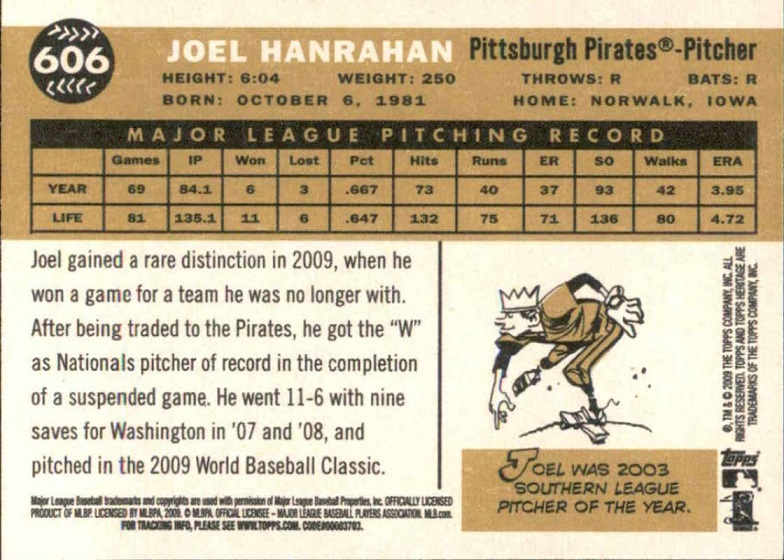 It’s interesting to see information from later in the 2009 season on the back of a 2009 card. Back in the day, the Topps high numbered cards were short-printed because collectors were usually over the idea of collecting the set by later in the summer. So the cards didn’t go to waste, they limited the amount of cards printed. It’s interesting, because they would later produce the Traded series cards and those were very popular. People were okay with “high number” cards then, as long as they were able to get the set complete in a box.

If you didn’t realize it already, this back is the same setup as a 1960 Topps back. The background color is lighter here, and of course all of that legal mumbo jumbo, which is on the side and bottom, wasn’t there in 1960. After reading the back here, I remembered that situation where Hanrahan picked up an extra win for the Nationals.

Are you thinking about purchasing this card? You’ll be happy to know that multiple sellers have it from $2 to $3 delivered. There are even two autographed versions that are fairly cheap. One will be just under $6 delivered after tax, the other has a $4.95 price with a best offer option. Happy collecting!