I have never used the 1993 Fleer set in this Card of the Day series yet. When I noticed that by searching old articles, I realized that I’ve used the Fleer Ultra set numerous times from that year already. No surprise there, since that is one of my favorite sets. Today’s featured player is John Wehner, the former player and current broadcaster of the Pittsburgh Pirates, who is celebrating his 55th birthday today.

I did an Ebay search for “1993 Fleer John Wehner” ,and of course he was in the Ultra set, which was beckoning me with every scan, trying to get featured here again. I resisted the temptation and now here we are looking at the regular 1993 Fleer set for the first time. Here’s a look at card #506 from that set, featuring the man who holds the record for most consecutive games at third base without an error. 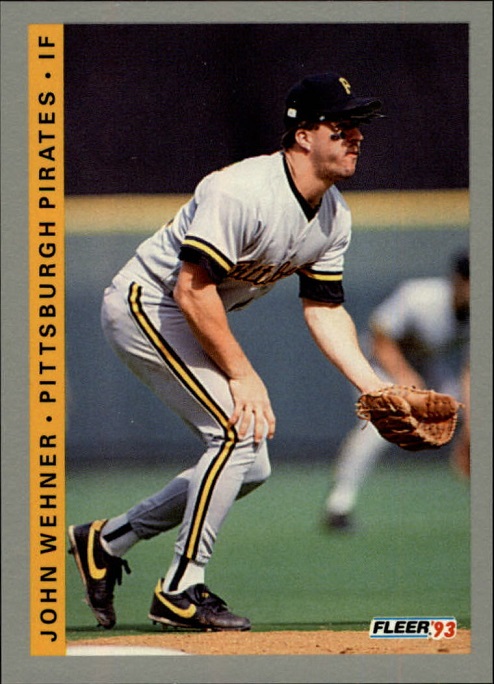 It’s funny if you look through scans of John Wehner cards, it looks like almost every photographer had the same idea of getting his picture at third base while he is setting up as the pitch is being delivered. You will find a lot of cards that look similar to this pose. As a side note, his Fleer Ultra card had him in the same type of pose, but he was playing first base at the time. We featured Wehner here exactly one year ago and it was the 1991 Fleer Update set, with a card featuring him in a batting pose. This card also features him in a batting pose (spoiler alert), just not on the front of the card.

Those 1992 uniforms are great looking in my opinion. They also work so well with this set. The borders for the entire set are gray regardless of the team, while the strip with the name/team/position is changed based on the individual team colors. The combo of gray and gold, along with the black letters, works great with those uniforms. 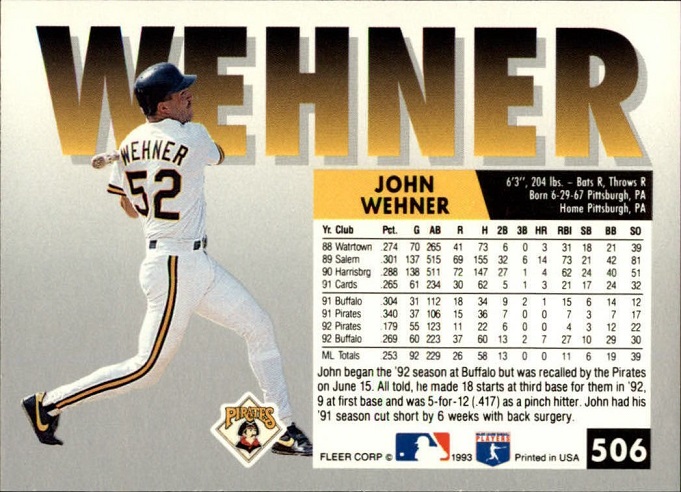 I like the look of these backs, especially the usage of team colors again. The last name in team colors and big letters with a shadow effect is a nice look. I also like how the photo of him couldn’t be any different from the front photo. You got an in action swing, along with the home white uniform. Fleer didn’t forget to include that great logo from that time period. They could have made that a little bigger, but that’s nitpicking. Same goes for the stats. Holding this card in hand (any card from the set really), those stats are tiny. At least they went with the standard black on white to make it a little easier to see. However, I appreciate whenever sets include full pro career stats. Notice where the team/club name says “Cards” for 1991. That was actually the Carolina Mudcats, so that’s an error on the card, but it doesn’t do anything for the value.

If you would like to purchase this card, I found a place called Ebay that has millions of baseball cards for sale. You can get this Wehner card for as little as $2 delivered from multiple sellers. There are some autographed options as well. One is asking $18 for a signed card, but two others have it for $4.50 with a best offer option, and $3 delivered. Basically, you can buy two for less than half of what the other one would cost.