In 1984, Topps and Ralston Purina teamed up for a 33-card baseball card set and called it their “1st annual collectors’ edition”. Three years later, they made their second set together and they were smart enough to call it the “1987 collectors’ edition”. They ended up making a 1989 set, but the sets got weaker each time. The 1987 set had 15 cards and they didn’t have a contract with MLB, so they couldn’t use team logos. The 1989 set was down to 12 cards and no logos.

The 1984 set had Bill Madlock as the lone representative of the Pittsburgh Pirates in the set. This set came out five years after the Pirates acquired Madlock (43 years ago today) to help with their 1979 playoff push. Even if you don’t know specifically how he did (he was very good), you know that the trade worked out well. Heck, you know that without knowing who else was involved in the deal. You can check today’s history article for those trade details. This article is about this card that came inside cereal boxes in 1984. Card #26 in the set, featuring Bill Madlock. 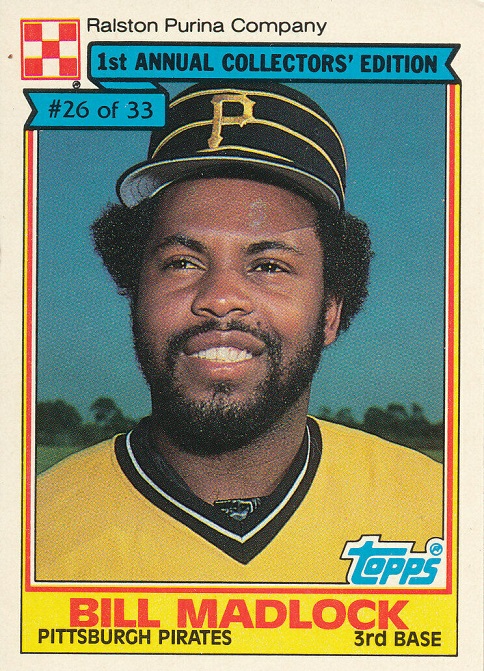 There are two versions of this card and the Ebay numbers show that this one is much more common. At the top you will see the words “Ralston Purina Company”. On the other version, it says “Cereal Series” in big red letters. The Ralston Purina logo is missing on that card, and the Topps logo you see in the bottom right of the photo section of this card is in the top left corner instead, basically replacing the other company logo.

As you can see, Topps and Ralston Purina had the right to use MLB logos. Imagine the great pillbox cap shown here without the “P” and possibly the stripes as well if they just airbrushed the entire thing. It’s a bit interesting that they decided to put the card number on the front of the card, because you can also find it on the back of the card. 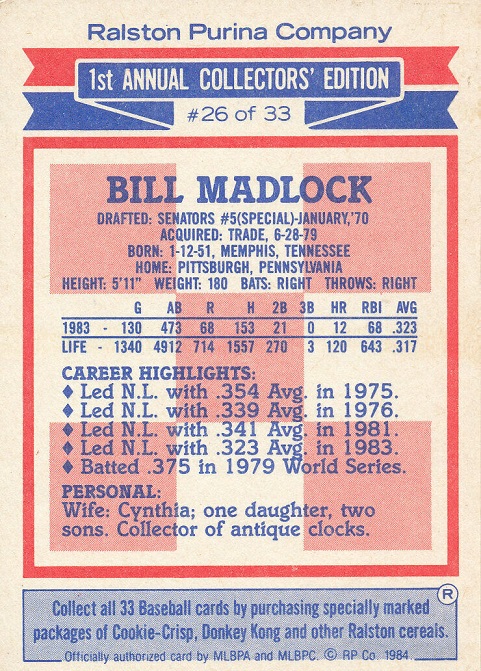 The back of this version has two major differences from the “Cereal Series” version of the card. At the bottom here where you see where you can find these cards, that’s not there in the other series. The other series also has a Topps logo as the background for the stats/highlights section, though it uses the same pink/white color combo as here.

Three things here of note. Look at that career average at the time, as well as that list of batting titles. That was an impressive resume by 32 years old. As for the other things of note to me, I did not know there was such a thing as Donkey Kong cereal. It was apparently around from 1982 until 1989, so if you still have some on your shelf, don’t eat it. The other thing is that I wonder if Madlock still collects antique clocks. I might have to ask him after this article is posted.

If you’re interested in this card, you can find more than 30 options for this version. I only saw three copies of the other version, but there’s no real price difference. You can get this card for under $2 delivered from multiple sellers, and that price includes the tax that I sometimes forget to mention. There are two signed copies that are both right around $20 each. All three of the sold copies of Madlock in the last three months were part of the complete set, which can be had in the $9-$13 range according to those prices.