I really owe the year 1997 an apology. It was such an exciting year for Pittsburgh Pirates baseball with the Freak Show in full effect. You would think that I would try to include cards from that year more often. However, today’s Card of the Day is just the second one featured here from that year. This is both the first time for the 1997 Score set, and the first time that we look at Jermaine Allensworth in this feature.

The Pirates traded away the 26-year-old Allensworth on this date in 1998, when it seemed like he was just reaching the peak of his game. I read about the trade earlier today, and the only reason I see for the deal that makes any sense is that the Pirates had a lot of potential outfielders ready or near ready, and not enough spots for them. They also thought highly of the return, at least that’s what they said through the media.

They were giving up Allensworth when he was still fairly young in baseball terms. He was hitting .309 with an .801 OPS at the time of the trade, and they still had plenty of control left before he reached free agency. It wasn’t even a salary dump because he was still 1 1/2 years away from making decent money. The return was minor league pitcher Manuel Bernal, who never made the majors. All of that stuff adds up to something that makes no sense and yet somehow it worked out fine. Allensworth played 104 big league games after the trade and compiled a -0.4 WAR. They probably should have got more from him considering all of the details at the time, but they wouldn’t have been better off keeping him either.

Allensworth did a fine job for the 1998 Pirates before the trade, so we celebrate his time with the team by looking at his card from the 1997 Score set. 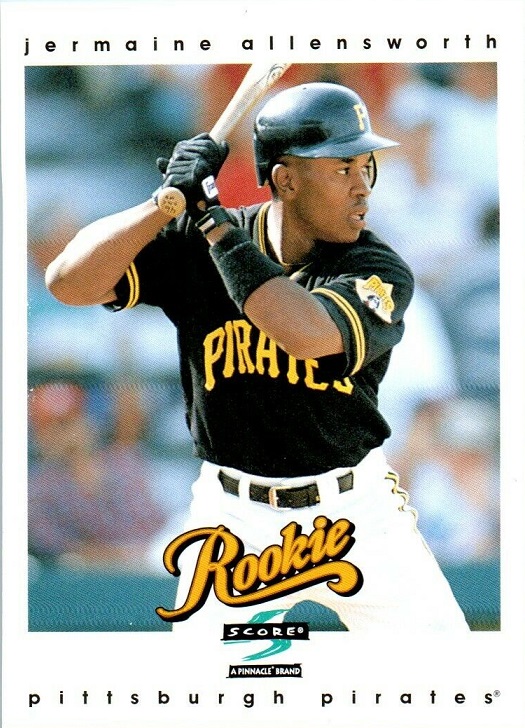 I like the look of this card, especially with that Pirates jersey. You can see the great logo on the sleeve as well, which adds a nice touch, especially since they didn’t add the team logo on the front.

When I was a kid, the cards with the “rookie” designation always seemed better to me. Didn’t really matter who they players were on the cards, add the word rookie, or maybe one of those Topps trophies, and the card became more valuable to me. While I know better now, I still like the look of cards with those features a little more than cards from the same sets without it.

The lower case writing for the name and team name is an interesting touch, something different you don’t see often. I’m not a fan of the Score logo with an extra tag line taking up residence in a prominent spot on the card. Be smaller and get in a corner, buddy! 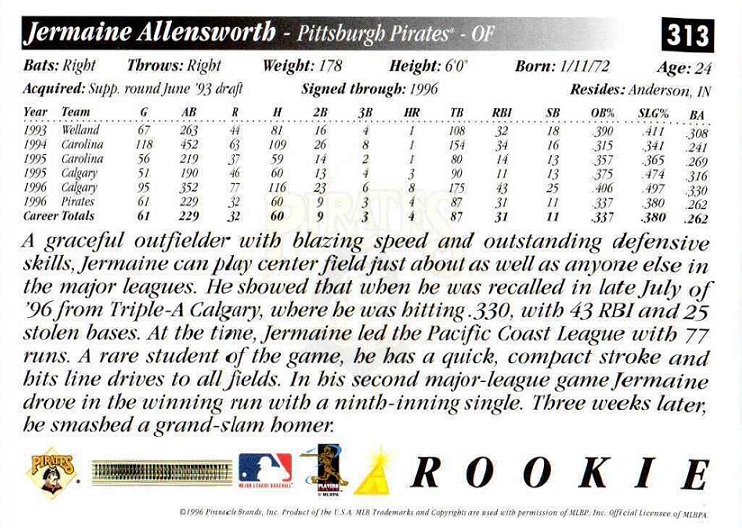 I’m not a fan of the back and it’s completely due to the writing style. Imagine trying to read those numbers with this card in hand, then going through a bunch of the players in the set and doing the same thing. That writing is not eye-friendly, both due to the size and the style. I like that they stuffed a lot of information here, and also that they included all of his career stats, but the writing just really annoys me. I was going to say that they completely left off the Pirates logo, but they sort of included it in the background of the stats/bios. They wrote so much so close together that you can barely see details on the logo. After I wrote all that, I noticed the little team logo in the bottom left. I glanced at the bottom stuff quickly because it’s usually just legal stuff and completely missed it the first time. Damn you, Score!!

If you’re interested in this card after seeing the back, you can ride your scooter to Ebay plaza and choose from one of the 15 or so copies of this card. However, most of them don’t look exactly like the one above. That’s because there are varieties to this card, including ones called Premium Stock, Showcase, Showcase Artist Proof and just a regular Artist Proof. You can get the regular one for $2 delivered from multiple sellers, and the others range in price from $5 to $11 delivered.

27 Jun at 12:01 am
Card of the Day
Featured, Jermaine Allensworth