Today’s Pittsburgh Pirates Card of the Day features the man who is perhaps the least known player in baseball history to win a batting title, though at the same time, that’s what may prevent him from holding that title. Debs Garms wasn’t a regular during the 1940 season, but he did hit the cover off of the ball that year.

The batting title rules aren’t the same now as they were back then. A player just needed to play in at least 100 games back then to qualify for the title. There was no minimum for plate appearances, you just needed to reach that 100 game minimum, plain and simple. Garms did just that, playing 103 times. From May 11th until July 19th, there was just one game in which he had more than one plate appearance. He batted .381 during that stretch, then got a start on July 20th and collected four hits. That led to him playing every day over the rest of the season. It might seem unfair that he won despite starting just 80 games all season, but he had a lot of leeway between him and the second place finisher. Garms batted .355 that season, 36 points ahead of Ernie Lombardi.

Garms has a few card options from his playing days. He was only with the Pirates for two years, and it wasn’t exactly the most popular era for producing cards. He made it into the 1941 Play Ball set after winning that batting title, so now we take a look at card #11 in that set, depicting the man who was born 115 years ago today, Pirates third baseman/outfielder Debs Garms. 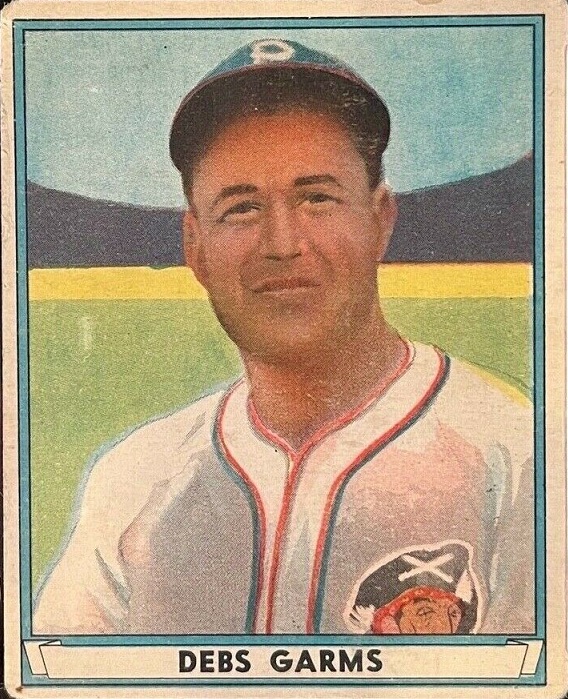 Play Ball produced sets with real photos prior to 1941. Then they switched to artwork based on real photos. The artwork here doesn’t look great, but it’s honestly not that bad. I know that because that same photo you see above was used on his 1940 Play Ball card, which was just cropped slightly different: 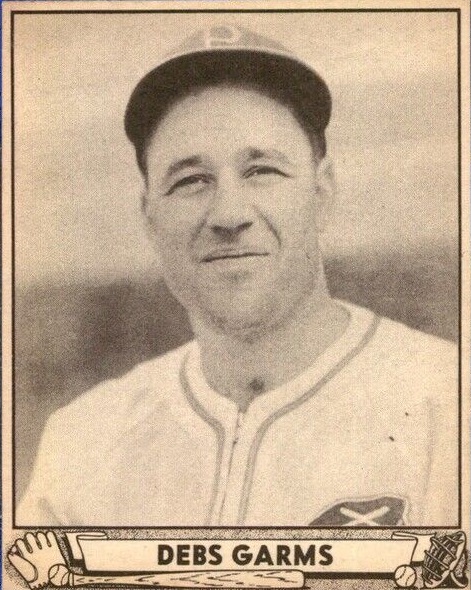 I went from thinking that the artwork was really generic looking, to thinking it wasn’t that bad once I saw the actual photo. I like the real photo look better from 1940, plus that set has a better design in my opinion, but there’s one thing I really like about the 1941 card compared to the other. That crop job in 1940 took off a lot of the logo on the left chest area of the card. Much of it returns with the 1941 card. Those are great looking uniforms and the 1941 Play Ball set brings it to life a little better with the color and 53% more logo. 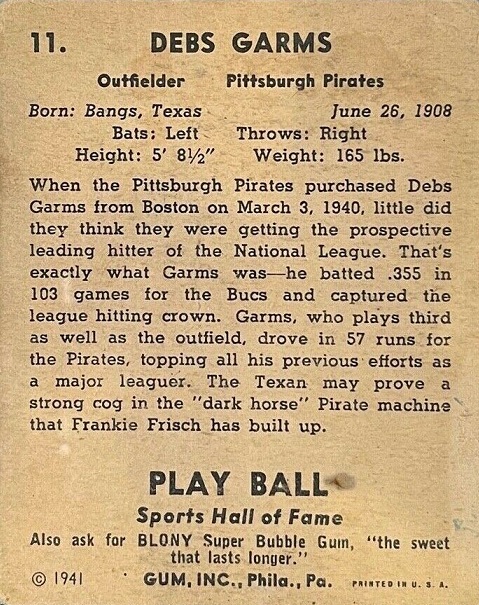 I mentioned up top that Garms was born 115 years ago today. Unless you’re reading this exactly one year from now, then his birthday up top might be a bit confusing. Lying about a birth year wasn’t odd back in the day. Some players added a year or two so they could sign when they were too young. Others subtracted years so they looked like better prospects. Many of the birthdays you see on old cards are wrong. The back mentions that he won the batting title and also that he played 103 games, but it didn’t go into more detail about how he won. There was actually some controversy behind it and a ruling was made before the year ended by the National League president, Ford Frick.

While you’re thinking about getting this card, be sure to ask for BLONY Super Bubble Gum, the sweet that lasts longer!

If you do want to get this card, then you can search the shelves of your nearest Ebay, where you’ll find 21 of these cards up for auction. They made a reprint of this set as well, so you can go cheap and get one of those instead, but the original will be worth money down the line, while the reprint will never be worth more than $2 each, if that much. The reprints are easy to tell apart, with wider borders on front and the word reprint in the middle/bottom of the back. As for the real thing, you can get it for under $20 from multiple sellers, but more are priced in the $20-$30 range. The highest (reasonably) priced one is going for $179 for an SGC 7. A signed one graded by PSA is $113, though it has a best offer option.