Today’s Card of the Day comes from the 2007 Topps set, which was not my first choice. I settled for this set AND settled for a back scan that annoyed me, because my first few card choices weren’t showing up with good scan options. I wanted to get a card of Paul Maholm on here. He’s technically been in our Card of the Day series before, but this is the first time he’s going solo. The other was on a card with three other pitchers from the 2008 Topps Heritage series.

Maholm turns 40 years old today, which might make some of you (me) feel old because you remember his career from the day he was drafted until his final days with the Pirates. Here’s something that might be hard to believe. In all of the years of Pittsburgh Pirates baseball, dating back to the Alleghenys and every other name they had in the 1800s (there really is a lot), only 21 pitchers have made more starts than him in franchise history. So while you might not fondly remember his 53-73 record (give him a break, it’s his birthday and he played for some awful teams!), he mostly certainly is a pitcher of note in team history. With that in mind, check out the Gold version of his 2007 Topps card. 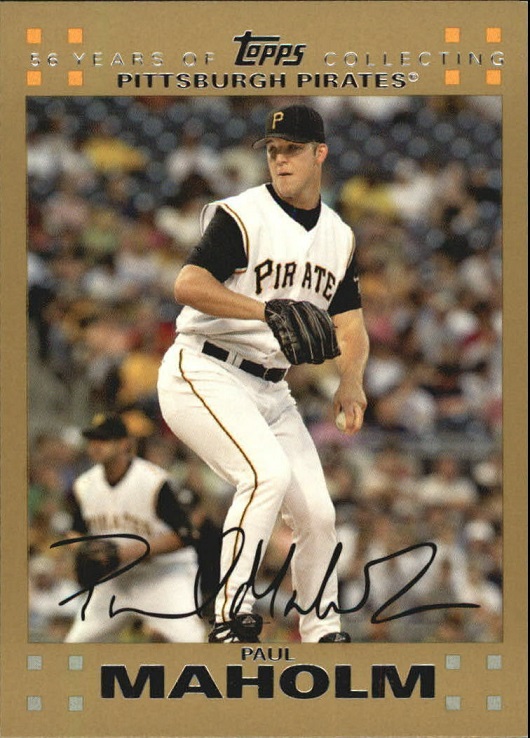 The regular base card from this year has a black border and the name is in silver. The Gold version was a limited print run compared to that card, but nowhere near the low number that they print for some cards they produce today, where every player has cards numbered low, so even the most common players have valuable cards. As for this card, it was the year 2007, so the Gold version had 2,007 copies printed. Topps has a nice in-game action shot, with the vest style jerseys and a black shirt underneath. The cards came with facsimile autographs, and up top they noted that it was “56 years in collecting”. Interestingly, they didn’t put the position on the front anywhere. Obviously here you can tell by the photo, but it’s not so obvious on most cards. 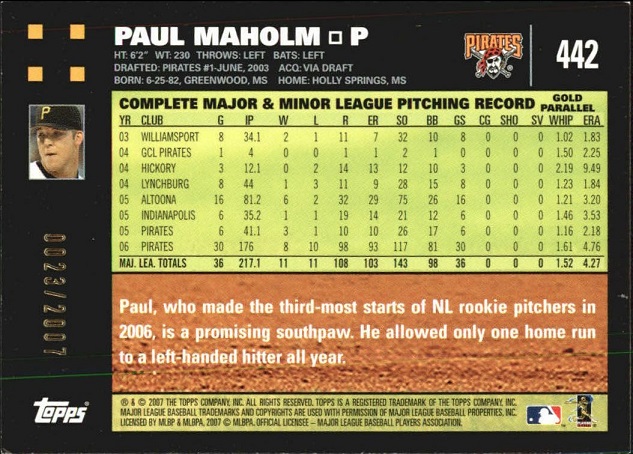 I tried to find a back that didn’t have a set of printer lines going across the back, but instead I found something that was a bit more interesting. Ebay has generic scans for people to use and a lot of people do that for common cards like Maholm. The problem here is that every gold card is individually numbered, so all 2007 backs are different looking. So not only did all of the current auctions use the same scan, the scan has that bright green line across the bottom, and two other lines that are a bit harder to see. It annoys me, but I was already locked in on this card because it was my fourth choice and I didn’t want to use the regular Topps back (which I almost did).

There are two differences between this back and the regular. Under his photo is the numbers to tell you that everyone on Ebay uses the back of card #0023 out of 2007. The other difference is in the line right above the statistical categories, where it tells you all the way to the right side that this is a “Gold Parallel”.

I like the back design, even though it does something I don’t like. They add a second photo, but it’s just a cropped version of the front photo…so it’s not really a second photo. They do two things I like here. They have all of his pro career stats, and they have the great Pirates logo from that time. You’re probably saying, John, you like all of the Pirates logos, but that’s not true. I hate the current one, and I’m not a fan of the 1958-67 logo that was too cartoonish for me. I like all of the others, some more than others.

If you’re interested in this card, you might be better off waiting for it, or just going for the regular Topps card, which I like better. The black borders look really nice on this card. If you are impatient, then you’ll have to pay $5+ to get the Gold card because no one has it for less. There are seven on Ebay right now, but due to shipping charges, no one has it cheaper. There are about ten sellers who have the regular card for $2 or less delivered. Just sayin’.