I know there are some loyal readers who had an idea that a player with the last name Brown would be featured here soon. I just did an article on Brant Brown and mentioned that he was the fifth player with that last name to be featured in our Card of the Day series, and there were two more players who I could also include. Here’s the first one, as we look at 1985-86 Pittsburgh Pirates outfielder Mike Brown. I could have waited on him for his birthday, or even for August 2nd, when he’s mentioned as part of a big trade in team history, but I decided to go with today because I didn’t have many options to match up to today’s history. Brown was fresh on my mind, and I actually have the other Brown (no spoilers) ready to go for the next open day.

Brown had a few options from 1986-87 sets, and I decided to get with the 1986 Fleer set because it hasn’t been featured here in quite some time. I wanted to use his card from the interesting 1986 Fleer Mini set, but I couldn’t find a good scan to use. Everyone on Ebay was using the generic listing scan Ebay provides for that card and that didn’t look good full size. I’ll get that set a different time, but for now, here is card #605 from the 1986 Fleer set, featuring Mike Brown. 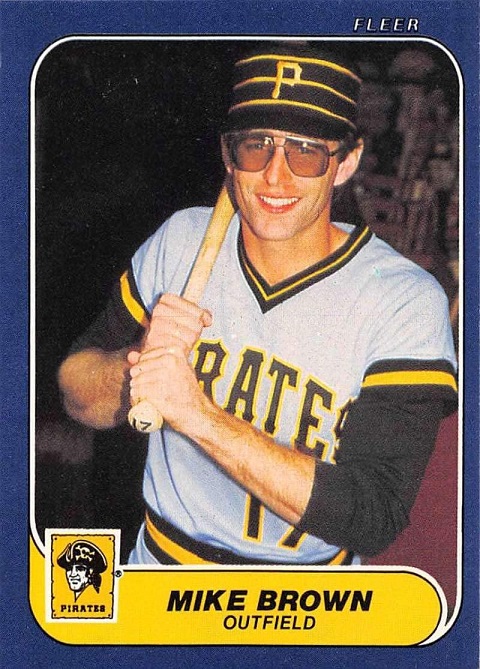 I don’t know what it is about this set, but it’s really close to being one of my favorite early Fleer sets, yet it just doesn’t get there for me. I usually like when sets from that era shift from using a white border around the photo because that was done so many times. Maybe the border color looks too much like Yankees blue, so it’s a subconscious thing. I really like how the name part of this card looks, matching up to team colors, which they also do for other teams. Plus they included one of my top three Pirates logos of all-time on the front. I’m a big fan of the uniforms from that era, as any good Pirates fan will agree that they are great. So you have a lot of things working right, but I still like the 1987 Fleer set so much more. 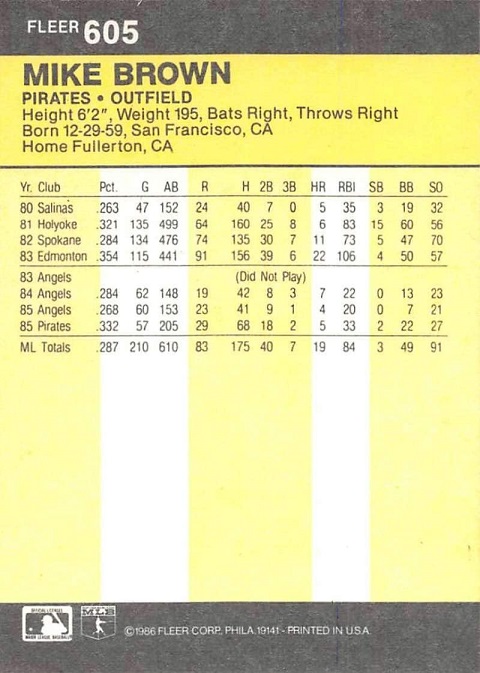 The back of this card has the typical Fleer design of the era. Just like Donruss, they didn’t change up the back style much for a good stretch of cards. The used vertical racing stripes so you could read the stats faster (proven fact that race stripes make anything faster). They included all of his stats from his pro career here, or at least they tried. See where it says “Did Not Play” for the Angels in 1983. Maybe you would think that meant that he was called up by the team, but didn’t get into any games. However, he played 31 games for the 1983 Angels, so I have no idea why they wrote that there instead of using his stats. It’s an error, but it wasn’t fixed, so it doesn’t add value. Fleer really wasted a lot of space at the bottom. Could have used that to say something like “Mike Brown debuted in the majors in 1983, despite what you may have read in his stats”.

If you’re interested in this card, then you might also be interested in the companion piece, his 1986 Fleer mini, which uses a different photo. Even if you’re not, they will show up in the same search on Ebay. As a side note, there was another player around at that same time named Mike Brown, an American League pitcher, so make sure you’re getting the right guy if you just do a non-specific set search. The other Mike Brown wasn’t in the 1986 Fleer set, so at least there’s no confusion here. The card above can be had from multiple sellers for around $2 delivered. The only auction of note is an autographed copy and the seller wants $40 for it. For reference, a signed 1986 Fleer card ended recently for $8.49 delivered, which is the only sold copy (signed or unsigned) of this card in the last three months. If you want one of his autographed cards, then you should be closer to that lower price.