On this date in 1956, the Pittsburgh Pirates traded second baseman Curt Roberts to the Kansas City Athletics. He didn’t know it at the time, but his big league career ended 13 days before the trade when he was sent to the minors, where he played another seven full seasons before retiring without getting another big league shot. He hasn’t been featured in this series yet, but in showing his 1954 Topps card today, you’ll actually be getting a sneak peek at his 1955 and 1956 Topps cards as well. Topps had no problem using the same photos over and over during this time period and Roberts is one of the players who got that treatment for all three years.

It’s been a long time since we have looked at a 1954 Topps card. The last was Vic Janowicz, a catcher for the Pirates, who also played for the Washington Redskins in the NFL around the same time. I posted that one of the same day as the Puppy Bowl in 2021, so it has been just over 16 months. This set was the third major set released by Topps. It gets lost a little, as the 1952 set is iconic, the 1953 set has been redone multiple times, including the ongoing Living Set. Then the 1955-56 sets are extremely popular still, with their horizontal layouts. It’s not that the 1954 set isn’t popular, it still is highly collected, but except for a few cards (Hank Aaron rookie is extremely popular), it gets overshadowed in the early years. Here’s a look at card #242 from that set, featuring Curt Roberts. 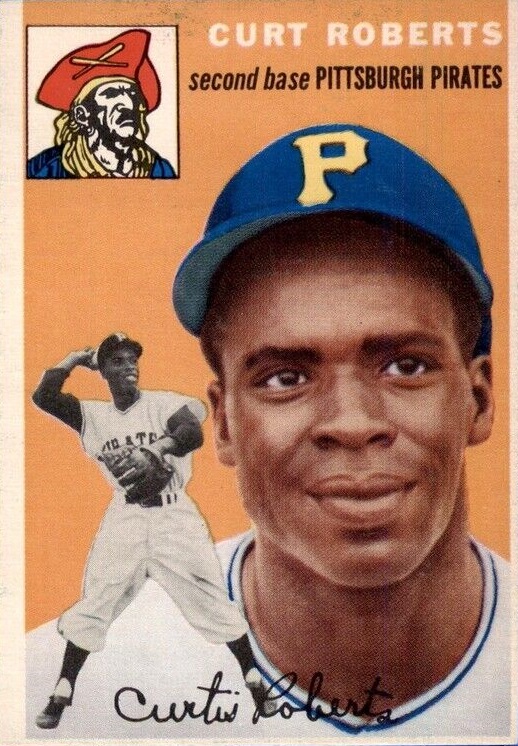 Topps put two separate photos on the front of each card, one was more of a portrait shot and bigger, while the other was usually an action shot and always in black and white. The 1955 and 1956 cards also used that same photo combo, except the action photos were in color for the latter two sets. Here is where Topps got lazy. That portrait photo you see there for Roberts is the exact same one that they used on his 1955 and 1956 cards. To make matters worse in 1955 specifically, they used the same action shot in the regular set and their doubleheader set. At least that action shot was different from this one.

The background on each card was a solid color, but there was no pattern with it by team. Pirates players could be found with red, orange, yellow, green and blue. Topps included that great Pirates logo, which they soon switched to that cartoonish one that I only tolerate because it was there for the 1960 season. I noticed on this card that his facsimile signature says Curtis, not Curt. The local newspapers used Curtis quite often, but not as much as the shortened version. 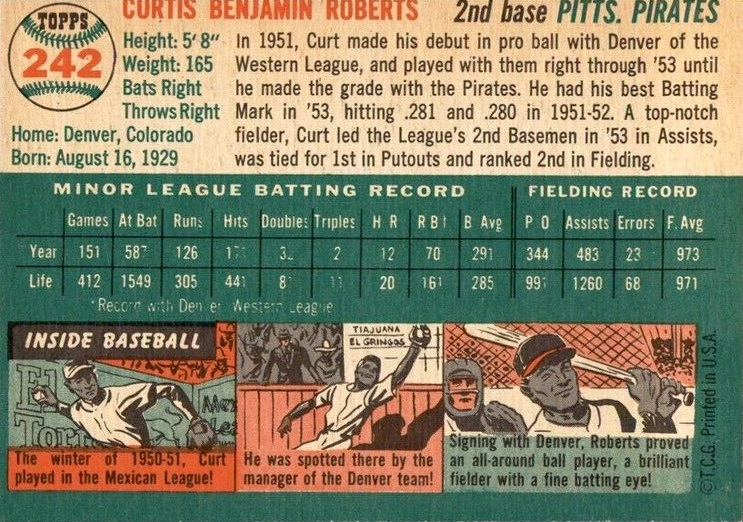 I’ve always liked the backs of these cards. The coloring reminds me of Christmas, and that’s never a bad thing. I like the cartoons, especially in this instance where it tells a story. I’m a little surprised that the scoreboard in the middle says Tiajuana is playing the El Gringos. I’m not 100% sure, but I couldn’t find a team named El Gringos, so I wonder if they just put that there because he was an American player. I’m guessing the detective looking guy was the Denver manager Andy Cohen, who had a big league career very similar to Roberts. It’s interesting how Topps says that he began his pro career in 1951, and I’m not even talking about him playing Negro League baseball in 1947-48, which was the actual start of his career. The cartoon clearly shows him playing in the Mexican League, which was obviously pro ball. American players weren’t down there just playing for fun in the winter.