I’ve already knocked out a bunch of the Brown brothers in Pittsburgh Pirates history in this Card of the Day series. I got Tom Brown, Mace Brown (twice), Adrian Brown, Emil Brown and now we get to the fifth one, Brant Brown. There have been nine players with that last name in Pirates history, and it looks like we can only do two more of them here, though one of those stretches the word “card” into the more broader baseball card collector sense of the word. We will worry about that later, as we now concentrate on the 1999 Bowman card of outfielder Brant Brown.

Brown didn’t have a memorable time for fans of the Pirates. He was traded to Pittsburgh from the Chicago Cubs for pitcher Jon Lieber on December 14, 1998, and after one season he was traded to the Florida Marlins for outfielder Bruce Aven on December 13, 1999, one day short of a full year with the team. Lieber went on to post a 20-win season with the 2001 Cubs, though he would have become a free agent before that year if they didn’t sign him to a contract extension, so the Pirates didn’t exactly lose that season. However, Lieber put up 6.2 WAR during the 1999-2000 seasons, while Brown and Aven each put up negative WAR numbers during their only seasons in Pittsburgh.

While his stint wasn’t great, he was with the team at the right time. Most one-year players in team history have 0-1 cards available, but there were plenty of cards being produced in 1999, so we had choices here.  I liked the look of the 1999 Bowman set the best, so that’s how I made my choice. I just happened to choose a set that hasn’t been featured here yet. I’ve actually gone pretty light on 1999 sets, so if that is one of your favorite years, I apologize. This is just the fourth set from that year in 27+ months of Card of the Day articles. 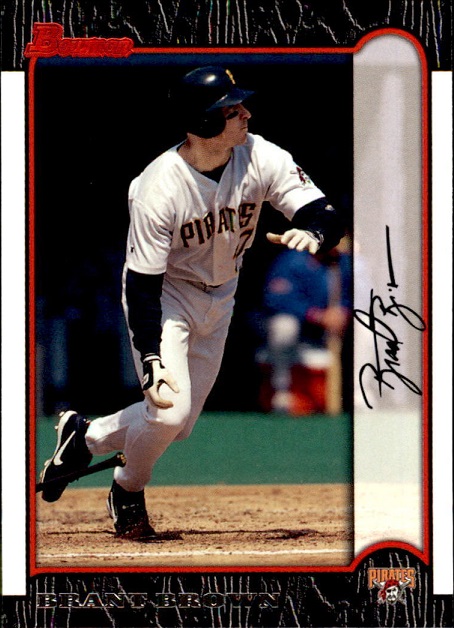 The 1999 Bowman set did one of my least favorite things, while also making up for it at the same time. Look at this scan and you might miss his name at the bottom because it blends right into the border. However, they included the name (facsimile autograph) up the right side of the card. Other than the hidden name, I like the look of this card. The border look is something different, and the red around the photo looks nice with the black border. They included that great Pirates logo on front, which is always appreciated. The use of an autograph up the side of the card is a bit different as well. It’s also a nice action shot of Brown. 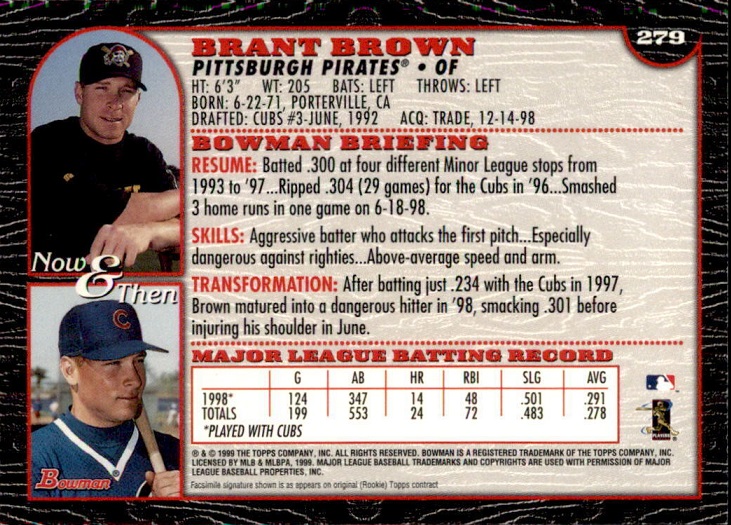 The back has a now and then set of photos. I started typing that it was funny because he was only in the majors since mid-1996, so the “then” photo wasn’t that old, but I decided to see if it was a minor league card and sure enough, that’s his 1993 Bowman card shown below. Even still, the photos look like they could have been taken on the same day. I really like the look of the back here with that black border pattern all around the back and the use of the red border around the information. That scouting report is glowing for a guy who finished his career with -0.9 WAR, but they wrote this up after his 1998 season in which he put up 1.4 WAR. The part at the bottom about the injured shoulder makes it sound like he missed a lot of time, but he played 124 games in 1998. He had an .880 OPS before the injury and a .785 OPS afterwards in 53 games.

If you’re interested in this card of a player who was with the Pirates for about as long as it took you to read this article, then you’ll be happy to know that you can get it for under/around $2 from at least seven different sellers. There are some other versions that are a little more expensive, like the chrome refractor, gold and international versions. You have multiple choices for each of those, if you’re interested in going for a tougher to find variation.