Today’s Card of the Day comes from a set that I looked at for the first time almost exactly two years ago with Jack Wilson’s first appearance, then haven’t gone back to it since. That is until today, as we look the 2009 Topps Heritage card of Garrett Jones. He has appeared in this series once, though he co-starred with Andrew McCutchen in that article. He turns 41 years old today, and last played pro ball in 2017, though he recently hit two homers at the Hall of Fame game in Cooperstown, so he might be planning a comeback. The 2009 Topps Heritage set used the look of the 1960 Topps set, and I’m always a sucker for cards that use throwback designs, so let’s get into this card. 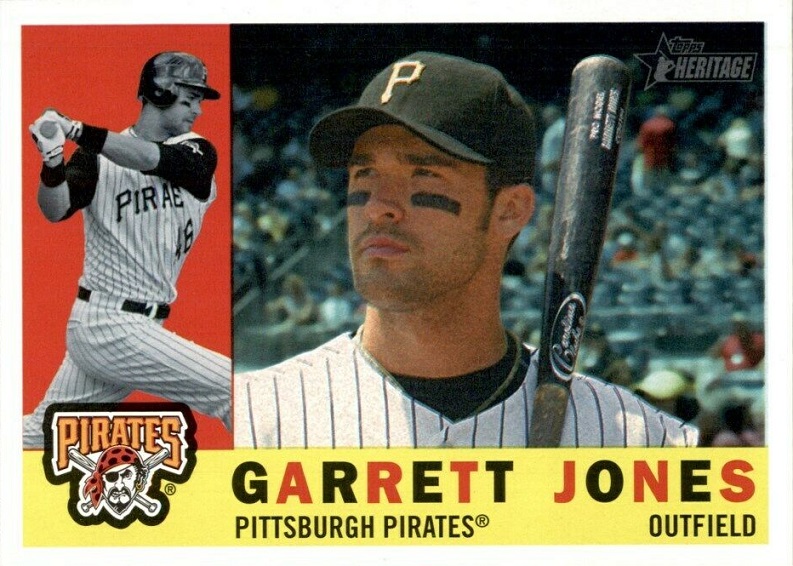 If you’re unfamiliar with the 1960 set, the cards had this same setup you see here, with a black and white photo on a solid background taking up about 1/4 of the card, next to a regular photo of the same player. Usually the photos looked completely different, though the Roberto Clemente card is one that they used two similar photos and just cropped them different. All of the cards in both the original set and this set have a horizontal layout. The rest at the bottom looks the same as well, with the Pirates logo under the black and white photo, multi-color letters for the player name, then the team name and position under the player name.

The original had a lot that I liked. It was similar to the 1955-56 cards, but different enough that they weren’t just getting lazy with an idea that worked well before. One subtle thing I like here is the Topps Heritage logo. It doesn’t stand out, especially not here when it’s blended into that darker section of the background. Some of the throwback logos are too front and center on the card, but this one works nicely. 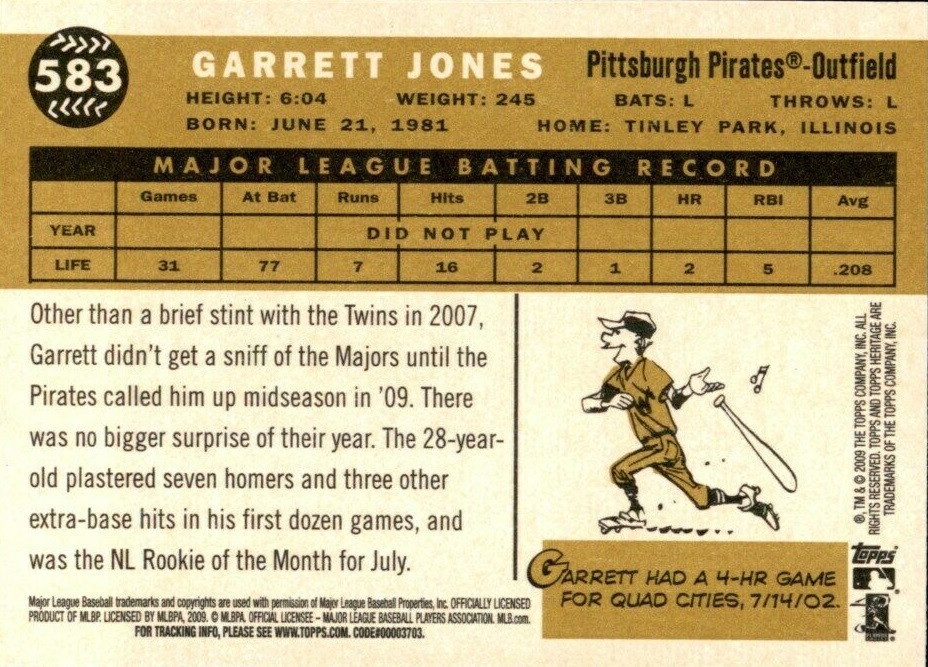 The back is also just like the original 1960 cards, except it’s a little more cluttered because they had to add all of the legal mumbo jumbo and little logos in the bottom right. Even the front of this card had legal stuff they didn’t need in 1960, with the ® for the registered trademark next to the logo and team name. The back here is pretty interesting because they had his 2007 stats only, but they talked about his 2009 stats, so you can tell that this set was put out later in the year.

The cartoon is also interested because I don’t even remember hearing that he had a four-homer game in the minors. So I looked it up and he homered in four straight at-bats after his team already had a 6-2 lead (they won 16-2), driving in a total of eight runs in the game. What is interesting about that game is that he hit ten homers all season. He hit 336 homers during his entire pro career, so it’s not surprising that he hit four homers in a game. It’s that he wasn’t exactly crushing the ball that season outside of that one game.

If you’re interested in this card, you can check out a site called Ebay, where they have 13 auctions up for this card right now, including two autographed cards that are going for $8 and $11. The rest all range in price from $2 to $7 and the only difference between those prices is the shipping charges (in other words, you want to pay $2). Happy collecting!