Today’s Card of the Day comes from a throwback set that celebrates my favorite regular Fleer set. In 2002, the Fleer Platinum set celebrated the 25th anniversary of the 1987 Fleer design. I was once asked about my favorite set designs from the big three from the 1980s, and it wasn’t until I thought about all of them did I realize that my favorite Topps, Donruss and Fleer sets all came from the same year. The 1987 set really stands out for me among the nine Fleer sets from that decade, and I really don’t have an obvious second favorite.

This is the first time looking at the 2002 Fleer Platinum set, and today’s Card of the Day player is a first-timer here as well, appearing in this series on his 46th birthday. Rob Mackowiak played for the 2001-05 Pittsburgh Pirates, seeing time at six different positions over the years. He’s listed as an outfielder on the card below, but he could been seen at second base, third base and even some first base if necessary. He was a solid player for the Pirates. He didn’t have any negative WAR seasons, yet he finished with 5.0 WAR in five years in Pittsburgh.

Mackowiak was a fairly popular player from what I remember, but he is remembered most for his one big day in 2004 when he hit a walk-off grand slam in game one of a doubleheader, followed by a game-tying two-run homer in the ninth inning of game two of the doubleheader. It just also happened to be the same day his son was born. The card below shows him after his rookie season, with that big day still 2+ years in the future. Here’s card #22 from the 2002 Fleer Platinum set featuring Rob Mackowiak. 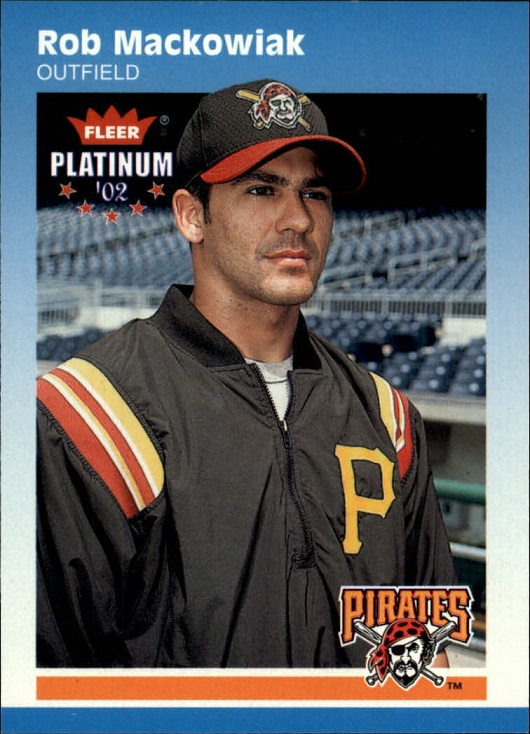 I was never a huge fan of the black hats with the red bills, but I don’t hate that hat. I do hate the pullover jacket, with what looks like Burger King burgers at the top of each sleeve. Who looked at that and thought it was a good idea? That jacket wouldn’t look bad without the double burgers on each side. Since the team used orange in the team logo, this card also has an orange stripe at the bottom. The early 2000s were a crazy time to be alive. Seriously, why are there burgers on the sleeve?

If you don’t know the 1987 Fleer set, picture this card without the Fleer Platinum logo and a much better looking uniform, but also a yellow stripe (for the Pirates) at the bottom. The 1987 logo was better as well, but I still like this logo, orange color and all. 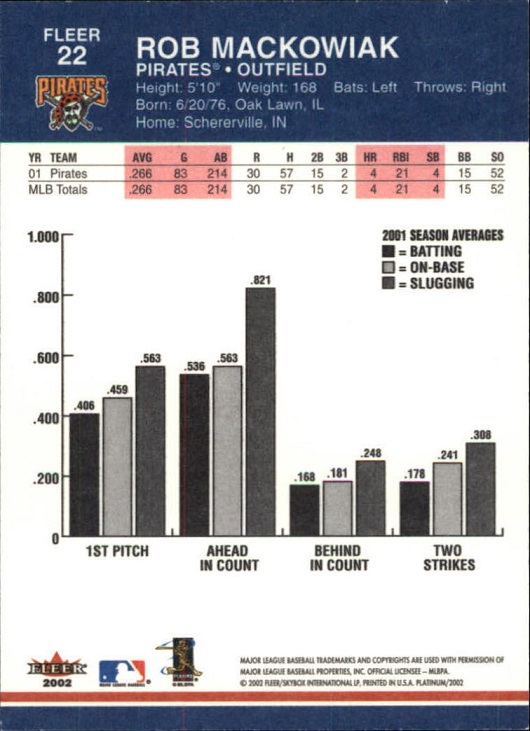 The back has another logo, which I appreciate. The back has a very similar look to 1987, but it’s different enough that you would say the 2002 back is based loosely on the 1987 back. The blue you see here is much darker on this card. The 1987 set didn’t have a logo on back. Also, the chart is different. The 1987 set had a chart, but not like this one. This is a chart, while the other was set up more like a strike zone. There are three major differences, but they still look somewhat alike.

If you’re interested in this card, you’ll be happy to know that you can get it delivered for under $2, even if some early bird sees this article and beats you to the lowest priced copy. There are no auctions of note and no sold auctions in the last three months, so just watch the shipping costs if you buy one. There is one seller with the eight-card Pirates team set. They are asking $7.49 delivered, but they have a best offer option. Jack Wilson, Kevin Young, Brian Giles, Jason Kendall, Craig Wilson and Aramis Ramirez are all in the set. Did I really just name seven of the eight? Yeah, I was going to leave off Chad Hermansen…