Pitcher Bill Swift was born on this date in 1908 in Glen Lyon, Pa. He made his Major League debut with the Pittsburgh Pirates in 1932, and ended up spending his first eight seasons with the team, where he won 91 games and pitched 1,555 innings. He has been in our Card of the Day series once before, almost exactly one year ago, though his birthday article got pushed back two days due to June 19th being such a busy day for Pirates birthdays. Our first look at Swift featured his card from the popular 1934 Goudey set.

Today’s card is from the 1936 Goudey Wide Pen set. This set has an interesting name, which wasn’t part of the original name. There was a set put out in 1936 by National Chicle that looks the same and that set is referred to as the Fine Pen set. Those names were added after the fact to easily differentiate the two sets. All that the names represent (Wide Pen and Fine Pen) are descriptions of the thickness of the letters in the players’ autographs. One looks like it was signed with a fine pen, creating thin letters, the other has thicker letters. There are plenty of older sets known more by a name that describes their characteristics, rather than actual names of cards, like the T201 Double Folders, T202 Triple Folders, T205 Gold Borders and T207 Brown Background.

Here’s a look at the Bill Swift card from the 1936 Wide Pen set. 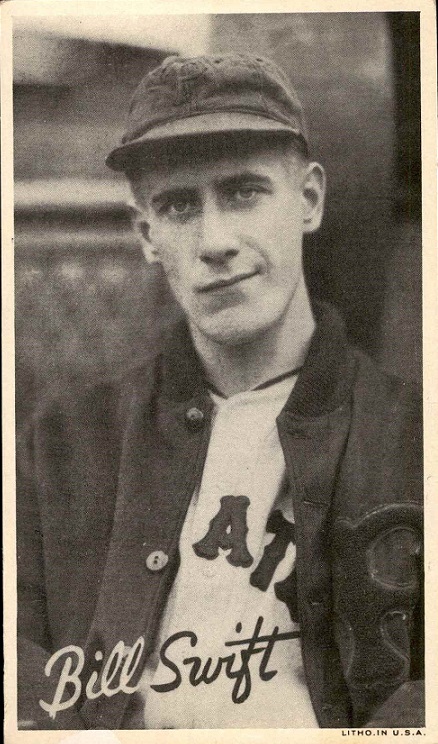 The immediate thing I noticed here is how his name is written in two different colors due to the background change from the photo. When you look at these occasionally, the first instinct is to see which set it is by looking at the thickness of the name, but without a Fine Pen card for comparison, you couldn’t be sure that this is one of the Wide Pen cards. Going back to the name in two different colors, that’s not common in the set, so it too stands out.

When you get into expert level in this set, there are different versions of these cards, listed as Type 1 through Type 5. I know about that stuff, but I am by no means an expert on this set. I have just a few of them and that’s because they offer an affordable way to get cards of players like Swift. Plus I like the real photo look. For the record, the scan above is a Type 1, which is easy to tell by the bottom right corner where it says “LITHO. IN U.S.A.”. If that’s there, it’s a Type 1.

I’d love to see a colorized version of this photo. There are some great things going on in this picture and the black & white photo doesn’t do it justice. That jacket is great, and you don’t see those often in photos. Many people don’t know that the uniform there has red letters. The “P” on the jacket and hat are also red, and the rest is a darker blue. Swift has the confident look of someone who went 15-8, 2.70 in 203.2 innings in 1935.

If you’re interested in purchasing this card, there are currently seven of them up on Ebay right now and they range in price from $20 delivered up to $45 delivered, with the higher priced auction having a best offer option. There’s nothing special (graded or autographed basically) listed so you just need to check the scans for condition. The only one that has ended on Ebay in the last three months was a straight auction listing and it went for $11 delivered. So you would probably be better off waiting for a regular auction, but like I just said, only one has been listed in the last three months.