Today’s Pittsburgh Pirates Card of the Day comes from an iconic set that hasn’t been featured here in over a year. It also includes an all-time great in team history who hasn’t had a solo article here in over a year. The set is the T206 set, made famous by the million dollar Honus Wagner card. The player is Tommy Leach, who ranks 16th in team history in WAR, ahead of team greats like Al Oliver, Andy Van Slyke, Jason Kendall, Starling Marte, Dave Parker and Hall of Famers Jake Beckley and Lloyd Waner, just to name a few players.

The T206 set is one of the most popular baseball sets still to this day. In fact, it has gained a lot of momentum recently. I have recommended that people collect this set, but it’s turning more into a set that you get a few cards from, instead of trying to put it together. Most serious collectors consider this set to be complete in a few different ways, as there are high-end cards like the Wagner, which make it impossible for 99.99% of card collectors to complete. There are also pricey errors/variations that give the 524-card set a few different stopping points to be “complete”. That’s before you even throw in the different backs, which greatly increases what is called the master set, which is impossible to complete. 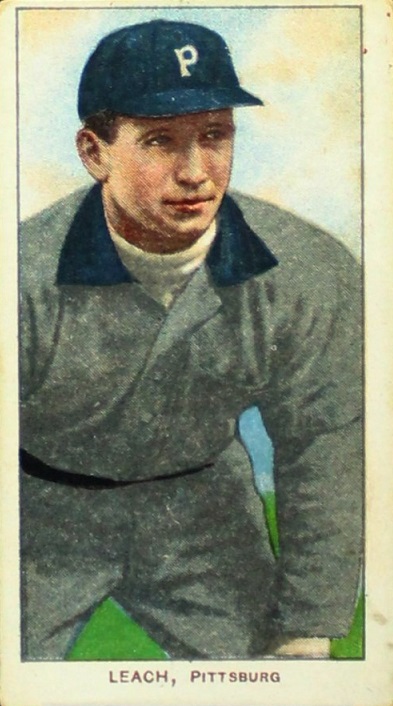 Leach has two poses in the T206 set. The other one is probably a little more popular. That’s the portrait version. This one is labeled as Bending Over, or just Bending. The artwork for T206 cards was based off of real photos. I wasn’t able to find this particular photo for comparison, but many of the original photos are still available, including the one for his portrait pose. It could be out there, I didn’t do an extensive search, but this pose can be found on another popular card (T3) as well. The other one shows the uniform as being the 1908-09 uniforms that had the iconic PBC symbol on the sleeve, but this picture appears to have a front pocket on the left chest, which would make it pre-1906 if that is indeed the pocket there. The uniform didn’t change much during those years, especially when looking at just the jersey. They used this jersey with the darker hats in 1901. It had a blank pocket for five years, then a “P” on the pocket for two years, then no pocket and the PBC sleeve logo for two years. The colors, collar, buttons never changed during that time. 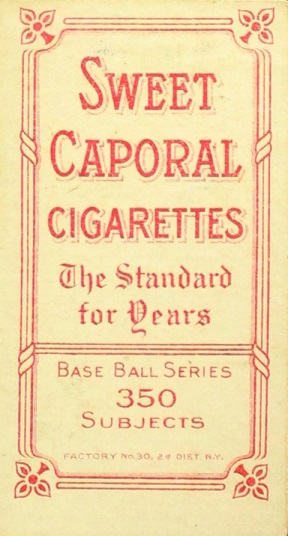 This is just one of the possibilities for a back to the Leach pose shown above. The set has numerous cigarette and tobacco brand ads, and there are many varieties within those backs. Not all of the backs in the set can be found on the Leach/Bending Over pose, but that’s expert level information and not something to worry about if you’re a new collector. I didn’t double check the list, but a tremendous website called Vintage Card Prices has 14 different back possibilities for Leach. The one you see here is one of the easiest ones to find, as a large majority of T206 cards have Piedmont or Sweet Caporal brand backs. Many of the rest add to the cost of the card, some a little (Old Mill, Polar Bear, Sovereign), some a lot (Uzit, Lenox, Cycle 460). This set was produced in three large groups, which you can find on the backs listed as 150 subjects, 350 subjects (as shown above) or 350-460 subjects.

If you are interested in this card, there are 12 auctions on Ebay for the card right now. One will be completed before you see this and another is extremely low grade, but still going for $45. The other ten range from $120 up to $250. There’s one for over $600, but that price is well above over cards in the same grade. Clearly this isn’t a set for everyone. It is one of my favorite sets, but I haven’t bought a card from it in at least five years. Luckily, I started getting older cards at a very young age and basically spent my first paychecks while still in high school on these cards, then continued doing that for a few years. I probably bought this card for $25, and we aren’t talking about 20 years ago. These cards have really taken off in the last few years. If you are thinking about collecting T206 cards, or just buying a few examples, it’s not something I would wait on buying.