You can look through the record books all you want, you won’t find Jim McDaniel appearing in a regular season game with the Pittsburgh Pirates. In fact, you won’t find him appearing in any big league games. However, in 1959, Topps decided to make the 27-year-old outfielder one of their The Sporting News Rookie Stars of 1959.

The idea from this article came from one of the players born on June 17th (the date this article was published, in case you’re reading this later). Exactly one year ago, I featured the 1959 Rookie Stars card of pitcher Bennie Daniels. I was going to use one of his other cards today, not knowing exactly sure how many others he had available. When I clicked on that link two sentences back, I saw that I mentioned the Jim McDaniel card in this set, and that’s how we got here. With apologies to Bennie Daniels, who has a nice extended/updated bio in our daily history article, here’s a look at card #134 from the 1959 Topps set, featuring Jim McDaniel. 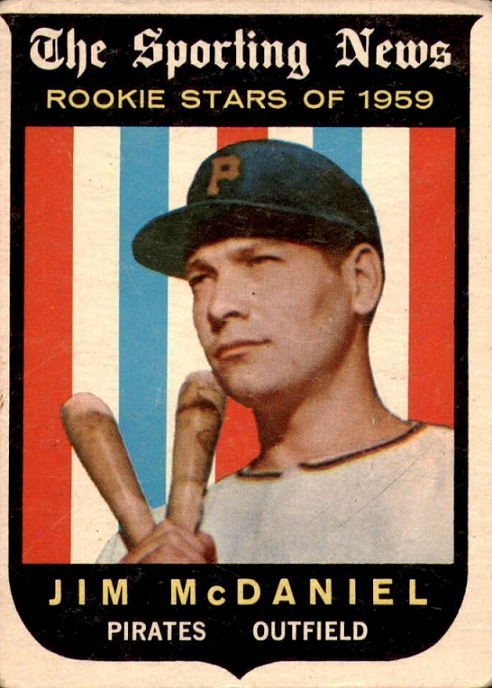 Topps teamed up with The Sporting News to come up with a subset of 31 cards that all had the same design as what you see above, which was different from the other cards in the 1959 set. Here’s an example of one of those cards. They were all called the Rookie Stars of 1959 and they were arranged alphabetically. There were some guys who had decent careers in the group, like Bob Allison, Johnny Callison and Ron Fairly, but there weren’t any big name players. That lack of star power makes it an interesting subset to collect for those card collectors on a budget. It’s a nice little challenge that won’t break the bank. 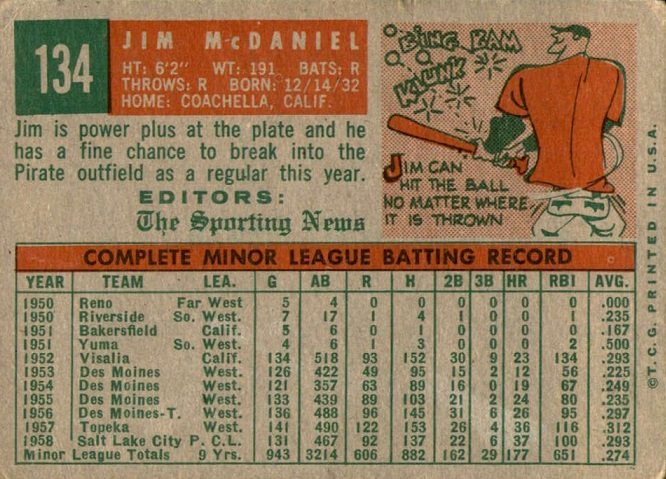 As the cartoon shows, McDaniel had minor league success despite his disproportionate body and his wrong grip on the bat. Perhaps if he cut down on the klunks and had more bams and bings, he would have made it to the majors.

Seriously though, it’s hard to look at those stats and not see a future MLB player. I’ll point out what isn’t obvious from looking at those stats. All except his last year (1958) were lower level teams. A .312 average with 36 homers, 122 runs, 116 RBIs and 66 extra-base hits in 141 games looks great, but not when it’s coming from a 25-year-old playing in Class-A ball. However, those 1958 stats are from Triple-A, and those are clearly big numbers, with the caveat that Salt Lake City provided some big numbers on offense, like Dick Stuart hitting 31 homers in 80 games that season. So what happened to Mr McDaniel to never make the majors?

He went to Spring Training with the 1959 Pirates, but early on the papers were critical of him striking out too much. They had no idea what was in store, because too much to them was 101 times in 1958. In 1959, he piled up 180 strikeouts in the minors. For reference, the single season MLB record for strikeouts through 1959 was 138 by Jim Lemon, a power hitter from the 1950s, who did that in 1956. Destroying the wrong MLB records while in the minors will put a nail in any coffin. So despite the continued power numbers, he basically had no chance of getting back to the majors after his shot in 1959. He nearly matched that strikeout total in 1960 and 1961, though we are talking about a guy who hit 265 homers in the minors over an 11-season span (1952-62).

McDaniel was among the first cuts for the Pirates on March 28, 1959, and he spent the year in the minors. The Pirates trade him along with Tony Bartirome, for minor league outfielder Henry Mitchell, who played nine years in the minors and never got a big league shot.

Anyway, if you want to get this interesting Pirates card that is over 60 years old now, it is plentiful on Ebay, as Topps cards from that era are popular. People are always looking for them and dealers always have them in stock. As of the writing of this article, there were 69 Ebay auctions for this card, ranging from $2 delivered for a low grade copy, to $219 for a PSA 8. I’ll point out that you can get a PSA 8 for much less ($124) and a majority of the auctions are under $10 delivered. Just seven of these cards have sold in the last few months and none went for more than a few bucks.