Today’s Pittsburgh Pirates Card of the Day is our second look at the 2002 Fleer Tradition set. I’m surprised that I’ve waited this long to feature it twice because it’s one of my favorite sets from that time period of collecting (late 90s-early 00s). The first time we checked out this set was nearly a year ago, looking at Brian Giles on his birthday. Today’s player is Kevin Young, who was born on this date in 1969. Let’s get right into card #318 from this great throwback set, featuring Pirates first baseman Kevin Young. 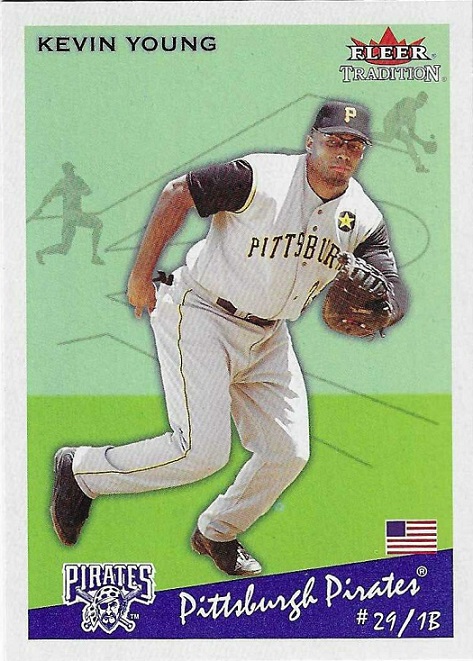 The looks of these cards are based off of the 1934 Goudey set. More specifically, it’s the Lou Gehrig version of cards from that set. The bottom of the original cards with the blue band at the bottom (that looks purple here) had a drawing of Lou Gehrig and next to it, they wrote “Lou Gehrig says…”. The three dots were a cue to turn the card over and check out a scouting report on the back that was supposedly written by Lou Gehrig, but that was just their way of using a famous player to help sell their cards. In comparison to the old cards, the Pirates logo you see above was Gehrig, while all of the other writing was the “Lou Gehrig says…” part.

The background and player’s name up top are just like the original cards. The American flag was added to these cards, and my best guess is that it was because they were being printed right after 9/11 occurred. At first I thought they showed the country flag of each player, but they all have American flags. 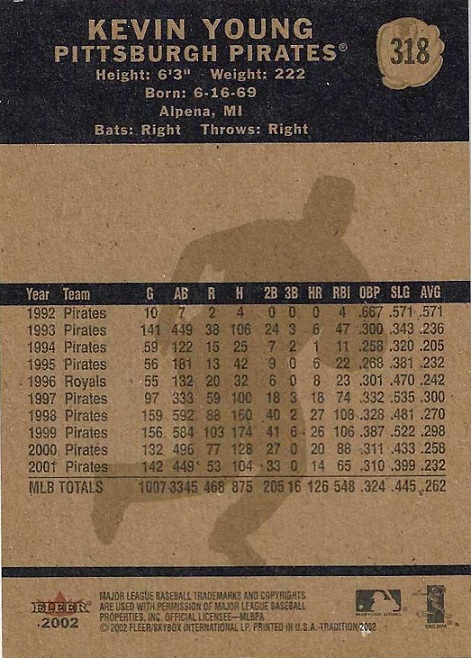 The back has the old school feel as well, but it’s clearly not the same as the 1934 Goudey. There’s no scouting reports on the players, just big league stats. There was even room here for some type of bio or fun facts, but Fleer chose to leave a big empty space (top and bottom). I would be fine with that decision if they included all of his stats as a pro including the minors. I don’t get the reasoning here, and it really looks like something is missing.

What I never noticed with these cards until I did the article on Giles is that the shadow back image under the stats is the same exact picture as Young on the front. I guess I never noticed because I was never looking at the front and backs of these cards at the same time, so it didn’t click.

If you’re interested in this card, you can get it for $2 or less delivered from a handful of sellers. There aren’t a ton of auctions for it, but there are some cards of interest. There’s an autographed copy for $13 delivered. There are also glossy versions that are numbered to 200. Two of those are on Ebay right now and they are going for about $7 and $8 delivered.

You can also just go for the Pirates team set if you like the look. Be careful here, because there are multiple options. This set has some cards that were updates to cards #1-#500 in the set. Some sellers have the team set with just the regular printed cards, so you get 13 cards for a lower price ($8 is the lowest). Some sellers have the team sets a little higher ($11.24 is the lowest) with the updated cards included, giving you a total of 20 cards. I’ll note that not all of the cards in the set use this front design.