The 1976 SSPC baseball card set consisted of 630 cards and it had a really interesting story attached to the making of the cards and the small printing numbers associated with the set. When these cards were produced, Topps had exclusive rights to the baseball card market. So the Sports Stars Publishing Company decided to make a set without getting any of the rights from teams or players. That venture didn’t go well for them, as they were forced to stop printing the cards and could not reprint them at any point.

Today’s Pittsburgh Pirates Card of the Day is our second look at this set. The first was way back in November of 2020 and it featured John Candelaria on what is considered to be one of his rookie cards. Today’s card subject is Ed Kirkpatrick, who was traded by the Pirates on this date in 1977, during his fourth season with the team. He is card #580 in the set. 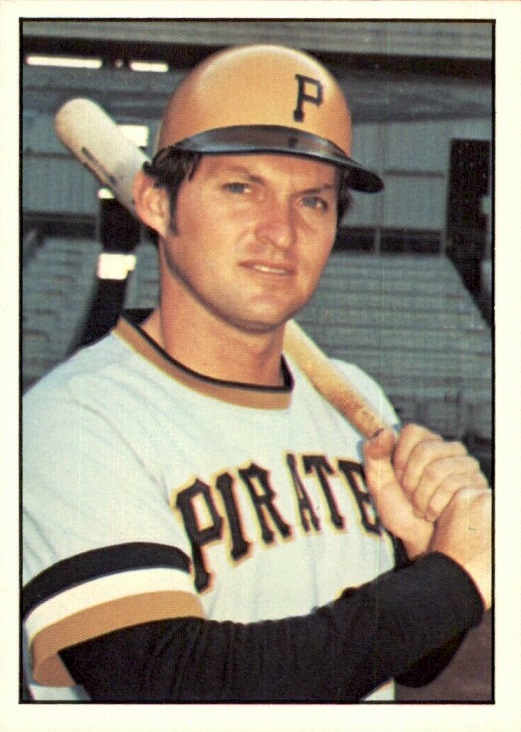 I read something really interesting while looking up specifics for this set. As you can tell by looking at this card, the front design is as plain as you can get. Small white borders around a black frame for a large photo. No team name, no position, no player name. The design of this set was modeled after the 1953 Bowman design on purpose because those in charge at SSPC thought Topps was going into too much detail for the look of the card design. They wanted to focus on the player photo, saying that many collectors appreciated the simpler look, making it all about the photo.

While that last part is a matter of opinion, and I’m sure many people agree, it’s not something that you could do every year. You wouldn’t be able to tell specific years apart if they modeled them after plain design sets every year. Topps was printing their 25th full set in 1976, and they had football, basketball and hockey cards as well by then, so they had to go through some front designs during that time, and there were definite misses over the year. Anyway, it’s a good photo of Kirkpatrick in the 1975 uniform. 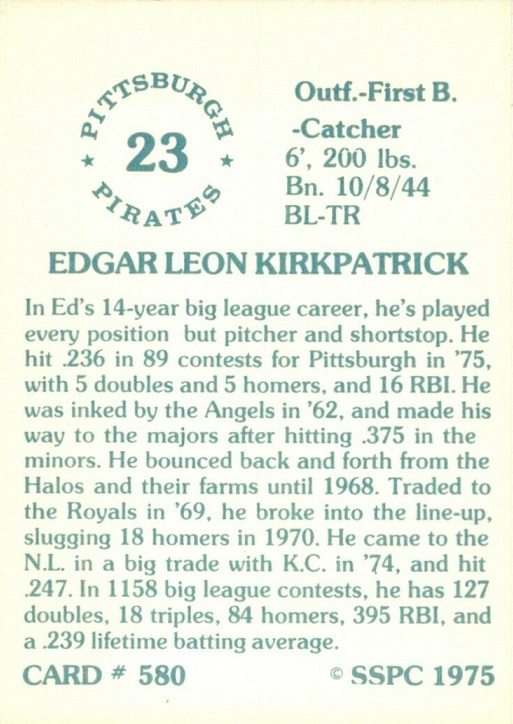 The first thing I noticed on the back was the odd abbreviation for outfield (outf?), not that “first B” is much better. The #23 in the circle appears to be a card number at first, but it was his uniform number. The card number is at the bottom, and Kirkpatrick is near the back of the set. The back info on these cards was written by Keith Olbermann, long before he became famous on SportsCenter. You’ll often see these cards listed as being from 1975 because of that date in the bottom right corner. However, the printing date isn’t the final say when dating cards. This is a 1976 card.

Notice the back part where it says that he hit .375 in the minors, which helped him get to the majors. He had quite a debut, and quick path to the majors that did not last. He played just 64 minor league games before his debut, mostly in Class-D ball, which was a full six steps from the majors. He other brief time that year was spent just one level higher, so he was jumping over four levels to play with the Angels in 1962. The really crazy part was that he was just 17 years old at the time of his pro debut. The card mentions that he jumped between the majors and minors until 1968, but it doesn’t note they he stuck in the majors for good by age 23, which obviously isn’t a bad age. It just looks bad when you say it was a six-year gap.

Since the production of these cards was shut down so early, they are nowhere near as easy to find as 1976 Topps. However, they aren’t hard to find. They also aren’t hugely popular except for a few cards, so you can get them cheap. They only cards of note here are two autograph cards. I don’t collect autographs too often, but I can tell you that if you want one, check it against other known autographs from him. The two examples on Ebay have extremely different autographs. That could be a matter of one autograph being from his playing days and one being much newer, as some autographs change over the years. If you just want the card up top with no writing on it, there are multiple sellers that have it for under $2 delivered, and some who have it for just slightly above that $2 mark. This card won’t break any banks.