Today’s Pittsburgh Pirates Card of the Day comes from the 1993 Studio set, and it features lefty pitcher Randy Tomlin, who turns 56 years old today. He pitched his entire big league career for the Pirates, debuting in 1990, then playing his final Major League game in May of 1994.

The 1993 Studio set was put out by Donruss and it included 220 cards. These cards were a higher quality than their regular set, with glossy photos. All of the major companies has sets that were high-end at the time. That was because Upper Deck came out in 1989 and had a product that was far superior to everyone else, Donruss, Topps, Fleer and Score. So all of those companies came up with high-end cards to go along with their regular set.

There were a lot of card sets in 1993, which is why I’m going to be at least three full years into this series before I get to them all. I could do 1993 cards of Randy Tomlin for the next week and you wouldn’t see them all. I’m not going to, but if you wanted to collect his cards, you could stay busy. Here’s a look at card #219 from the 1993 Studio set, featuring Randy Tomlin. 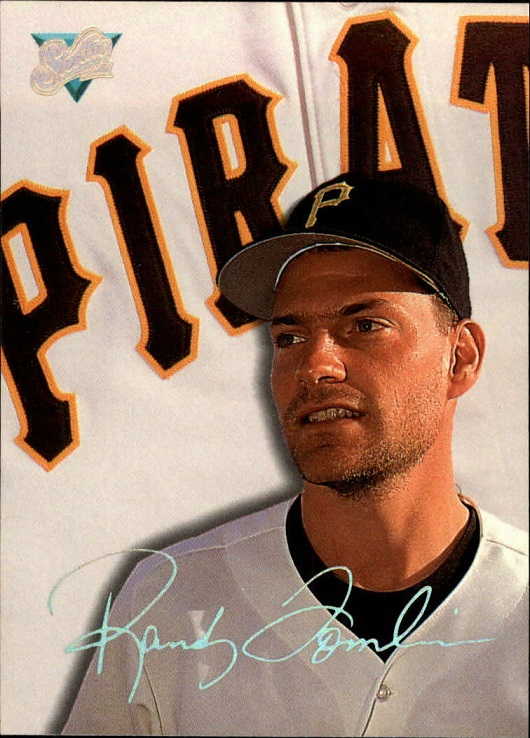 These cards had an interesting idea. The background was a uniform, or in some cases, it was a closeup of a team logo. Then a portrait style photo of the player was placed in the foreground, with a little bit of a shadow effect. There was a facsimile autograph in place of the player’s name, with no position or team listed on the front, not that the second part was necessary with the logos/jerseys. They capped it off with a foil Studio logo. 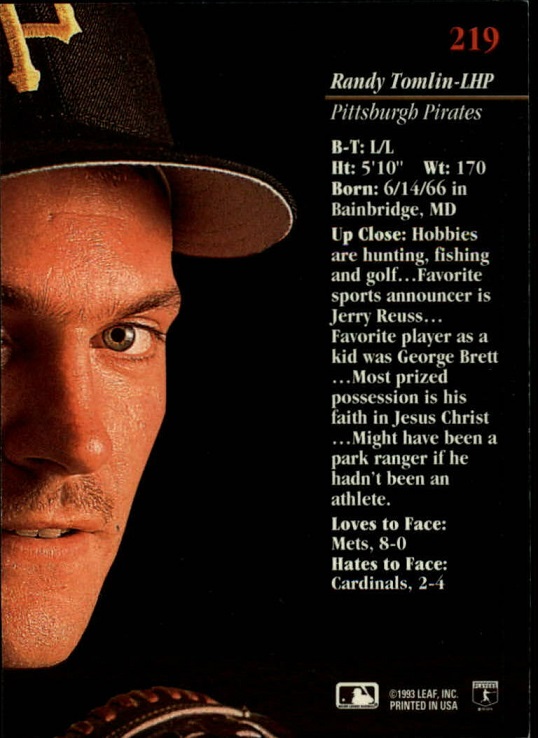 The back went with the all black background look and an interesting half face photo of Tomlin. These were high quality glossy just like the front, which wasn’t always the case with cards during the era. What is interesting here is that they didn’t include any stats from the season or career, except those random notes at the bottom. This was just a small bio section, telling you about his hobbies and what he would be doing if he didn’t play baseball. Unfortunately for Tomlin, injuries curtailed his career and he was out of baseball completely by age 31, with his last two seasons spent trying to get back to affiliated ball.

Two things I found interesting is that his favorite player was George Brett. He was a pitcher who was born in the Baltimore area. Knowing just those two things, my guess would have been Jim Palmer. I may have said Scott McGregor or Mike Flanagan, two pretty good lefty pitchers just like Tomlin, who were with Baltimore during his teen years. One thing I didn’t know is that he was fairly small for a pitcher at 5’10”, 170 pounds. He was the smallest pitcher on the 1993 Pirates. I wonder if Tomlin is available for when the Pirates play the Mets this year? As for his “Hates to face” team, join the Pirates pitching club in that one.

If you’re interested in this card, get on your bike (driving is too expensive) and head on down to the nearest Ebay, where this card can be found for as low as $2 delivered. One copy has sold in the last three months, going for $3.24 delivered. That same seller has one available for the same price in case someone beats you to the $2 one. There’s one auction of note. An autographed one is going for $11.50 and it comes with a ticket to the card show he signed at, which acts as a COA in this instance.