It hasn’t been long since I featured the 2001 Fleer Platinum set, but things lined up just right to use it today. The first time I talked about this set was back on April 9th, as I featured Todd Ritchie’s card. He was the player choice that day because it was the anniversary of the first game at PNC Park and I wanted to use a 2001 card to mark the occasion. He was the starting pitcher that day, so it made sense. In that article, I mentioned that I remembered getting a 2001 Fleer Platinum card of Adrian Brown when the set was brand new and I immediately loved the look of the set.

My date of birth prevented me from buying 1981 Fleer cards when they were new, but I got a bunch of older cards when I was a kid and always thought the 1981 Fleer cards were cool because it was the first year for them putting out a full set. I’m a big fan of the throwback designs, so when I saw the Adrian Brown card I wanted to get the rest of the Pittsburgh Pirates from the set.

I’m using his card today because it’s another first game that matches up with the player. Today is the 25th anniversary of the first interleague game for the Pirates. I decided to go to the boxscore and find a player I haven’t featured in this Card of the Day series yet. Adrian Brown was the first name I found, and I immediately knew which card I wanted to use. So here’s card #133 from the 2001 Fleer Platinum set, depicting Pirates outfielder Adrian Brown. 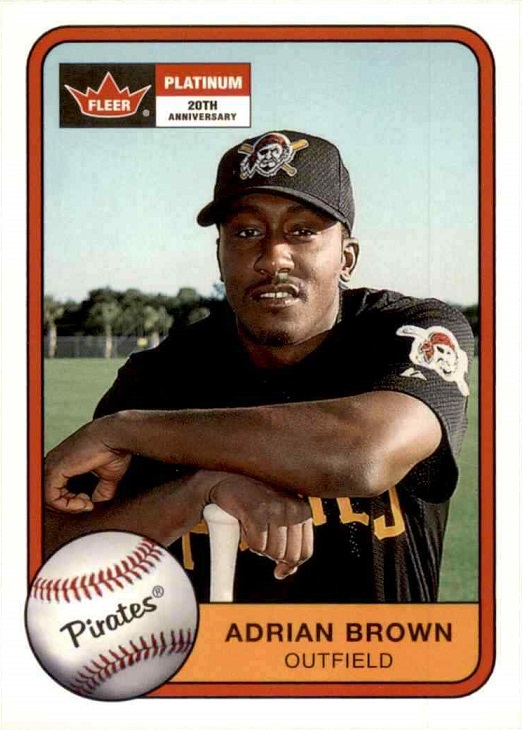 If you know the 1981 Fleer set, then you know that this isn’t an exact match, but the set up is the same. That red around the photo is yellow on the 1981 Pirates. The orange where you see his name/position is gold on the 1981 set, so it’s not a big difference there. The only other two differences are due to the cards being more modern. The 1981 Fleer set didn’t have any company markings on the front, and here you get that big logo in the top left telling you it’s a 20th anniversary set. The other change is more subtle. The registered trademark logo after “Pirates” was not on the original 1981 cards. So you get the feel of the old set, but they are easy to tell apart side-by-side, even without the Fleer logo. 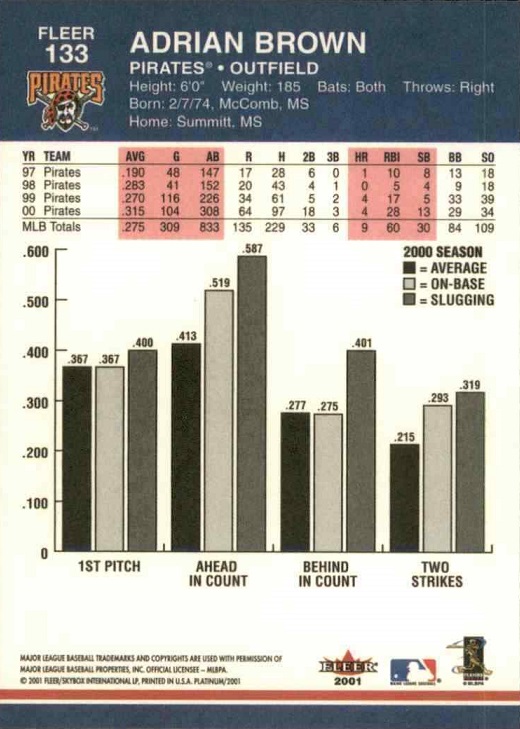 The back choice here is very odd. They didn’t decide to use the look of the 1981 Fleer set. The only thing I can figure out is that they wanted to use that chart you see, and the horizontal layout of the 1981 set wouldn’t work here. Instead they used a design more similar to the 1988 Fleer set in color, set up and look of the stats section. I’d rather see all of his career stats (including minors), but the charts are interesting to look at. I think that interest would wear off for me if I was looking at a large group of cards, so I’d prefer the full pro career and maybe a smaller chart.

You didn’t miss my favorite part of the back, did you? Top left under the card number, there’s that great Pirates logo from the day. They didn’t have team logos at all in 1981, and there were no back logos in 1988 either, so it’s a nice added touch.

If you’re interested in this card, you’ll be happy to know that it can be had for around $2-$3 delivered. Three sellers have it for under $3, including the tax, which I sometimes forget to mention. There are no special cards (autograph, graded, error, etc) so basically, you just need to watch the shipping charges if you decide to buy it, because a few people have cheap sale prices and high shipping.