The June 12, 1898 National League game between Pittsburgh and Cleveland has a lot of interesting notes to the contest. I purposely only used city names in the title to avoid some confusion, though one of the names is misspelled for the time.

In 1898, the city name Pittsburgh was spelled without an H at the end. For the rest of this article, just keep that in mind, because I’m going with the current spelling. The interesting parts here are the team nicknames at the time. We all know that the Pirates name came along in 1891 (even if it wasn’t fully embraced until 1895), and many of you probably know that the Cleveland NL team was called the Spiders. That was in the news a lot recently when the current Cleveland team was discussion possible new names and Spiders was the overwhelming favorite in many fan votes. We all know how that turned out. I planned on buying a Spiders hat and jersey or shirt after I saw the designs. I was all in (look them up, they are amazing). Between that and the history involved in the Spiders name, you can say I was extremely disappointed with their choice.

Anyway, there are two things to point out here before getting into the game recap and one other crazy story attached. The Pirates were not the Pirates in 1898. They were the Patriots that year. New manager Bill Watkins didn’t like the Pirates name, so he got them new red, white and blue uniforms and told the press that the team would be called the Patriots because the name fits better. It was fully embraced by everyone, but that lasted one year, then they went back to the Pirates name in 1899.

On the Cleveland side of things, the game recaps I read for this story did not mention Spiders once. However, they all called the team Indians multiple times. The American League didn’t didn’t fully embrace the Indians name until 1915, but it was in use for the Major League team in 1898. Imagine the title here saying “Patriots vs Indians, June 12, 1898” and you would think I didn’t know my baseball history, but it’s all there in 1898 black and white.

The names are just an interesting story to go along with this game, but it’s not the main reason I decided to write about the game. In fact, the actual game itself isn’t the main reason either.

The date June 12, 1898 fell on a Sunday, and back in the 1800s and into the early 1900s in some places, Sunday baseball was frowned upon. The Pirates franchise didn’t play Sunday baseball at home until 1934. A story ran in the The Pittsburgh Post on June 12, 1898 that said that the two teams will be arrested after the first inning of the game and charged with creating a disturbance. The papers noted that the citizens of Collinwood (a suburb of Cleveland) received “a warrant sworn out by their justice of peace” to prevent the game. Despite that warning, the two teams decided to play anyway.

As it turned out, those who were in opposition of the game were all talk. It was said that only 2-3 members of the Collinwood citizens who against the game being played actually showed up to the park, and they did nothing. The game that day had a much bigger problem than Sunday baseball haters.

The weather was awful that day. One paper wrote that “no game has probably ever been played in the National League under such trying circumstances”. In fact, it was also said that the only reason that they played the game was just to show the Collinwood group that they were going to get the game in no matter what was thrown at them that day.

The two teams did the minimum to get the game in. We don’t have a full play-by-play, but a lot of the details were covered, so here’s the game recap using everything available, followed by the boxscore at the bottom.

The Pittsburgh pitcher that day was Jim Gardner, who spent four seasons with the team, picking up 24 of his 25 career wins with the Pirates/Patriots, including ten wins in 1898. The opposing pitcher was young Jack Powell, who debuted in 1897 and had four 22+ win seasons, including 1898. He won 245 games in his career, but the reason most people have never heard of him is that he lost 255 games, eighth most in big league history. He pitched for a lot of bad teams.

Cleveland had the lineup advantage here as far as historical significance. The Patriots were led by manager Patsy Donovan, who you should know if I’ve been doing my job well during these last few years. Beyond him, there aren’t a lot of names I’d expect people to know, even though you can find bios for all of them on this site. Bones Ely is probably the second most famous of the group.

On the Cleveland side, you have Hall of Famers Jesse Burkett and Bobby Wallace. Burkett is one of the best hitters for average ever. Only five guys in baseball history have a higher average in more at-bats, Ty Cobb, Tris Speaker, Ted Williams, Babe Ruth and Lou Gehrig. You’re talking baseball royalty. Wallace was known as Mr Shortstop. He’s tenth all-time in dWAR for any position. Wallace didn’t play shortstop then because Cleveland had perhaps the most underrated double play combo in baseball history, with Ed McKean and Cupid Childs. I linked their Baseball-Reference pages so you can check them out.

That’s a long set up for a very short game with some specific details missing.

Burkett walked to start the game. Childs reached on a bunt single. Wallace grounded into a force out at second base, which was followed by two foul outs and a scoreless top of the first. Despite this game being in Cleveland, the Indians/Spiders batted first, which was very common for the time (home team batting first).

Donovan walked to start the bottom of the first, but a double play and a foul out, ended the inning quickly.

Harry Blake started the second inning with a double. He was bunted over to third base, then a walk put runners on the corners. Pitcher Powell grounded out, with the out coming at home plate. Burkett grounded out back to the pitcher for the final out.

Harry Davis hit a one-out double for the Patriots in the bottom of the second, but the other three batters in the inning were retired on ground balls. The third inning saw both sides go down in order, and then the rain really picked up, sending the players to the dressing room and fans sought whatever cover they could find.

It was said that when play resumed, the field was in unplayable condition. However, they were determined to get the game in so they played on. Cleveland got a single from Jack O’Connor, who would join the Pirates for the 1900-02 seasons. He was bunted to second, then Jimmy McAleer singled. A grounder scored O’Connor with the first run of the game.

It was 1-0 going into the bottom of the fourth. Unfortunately here, the game reports were sent in from Cleveland newspapers, so they didn’t go into full scoring detail. The said that the wet baseball proved difficult for Powell to throw, so he ended up giving up two walks and three singles, which resulted in three runs. The inning started with Tom O’Brien drawing a walk, but the next three batters (Jack McCarthy, Bill Gray and Harry Davis) were the players who scored the runs.

The fifth inning saw Burkett walk for Cleveland and two Pittsburgh players drew walks as well, but there were no hits or runs. Heavy rain started up again and the game was called a short time later because it was official and they had proven their point that they would get in an official game on a Sunday. It took all of 70 minutes to play and 6,000 fans got soaked along with the players.

Here’s the boxscore. One quick note from the bottom of the scan. I don’t think I’ve ever noticed the second umpire being described as the assistant. The home plate umpire in charge was Pop Snyder, a former Cleveland player who was with the team in the American Association, National League and Player’s League. The “assistant” was a pretty good one. That’s Tom Connolly, who along with Bill Klem, were the first umpires elected to the Hall of Fame in 1953. This game in Cleveland came not even two full months after his first game as a big league umpire. 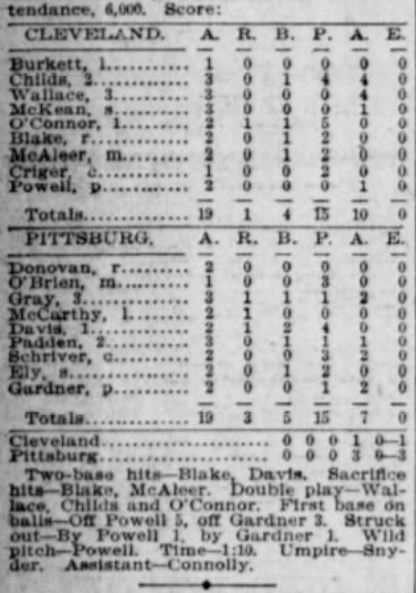