It has been exactly two years since we have featured Pittsburgh Pirates OF/3B Frank Thomas here in this series. He was here not too long after the series started back in 2020, shown on his 1955 Bowman card. Today is his 93rd birthday, so to help celebrate the occasion, we take a look at a second card for him. This one was put out long after the first one.

In 1998, Upper Deck put out a special set called Retro. It was a small set, but they had room to include two Frank Thomas cards. The first one was for the Hall of Fame player on the Chicago White Sox. The second one, card #65 in the set, featured the Pirates star slugger from the 1950s. Despite the name of the set, they didn’t use a retro card for him. Let’s get right into the card so you can see this great shot from the 1998 Upper Deck Retro set. 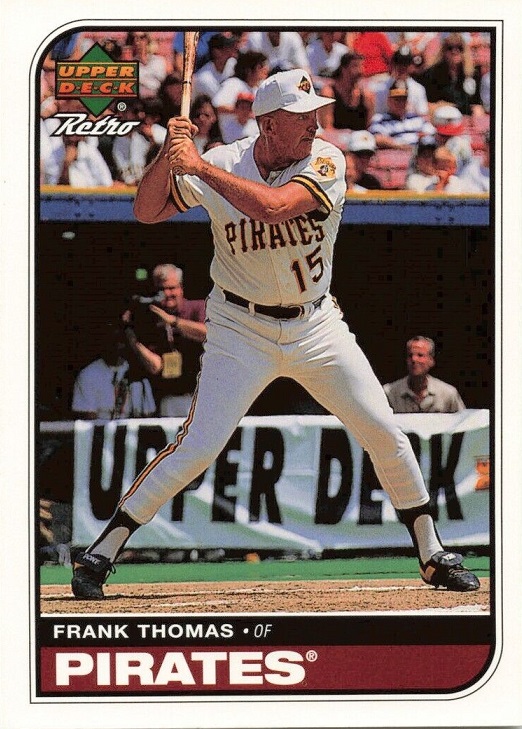 This photo clearly wasn’t from his playing days, but he was playing a game that day. During the 1994 All-Star game at Three Rivers Stadium, Thomas played for the Pirates/National League old-timers against a team of American League old-timers. At 65 years old at the time, he lined an RBI single to tie the score 1-1. The team, which was managed by Chuck Tanner, also had Bill Mazeroski, Manny Sanguillen, Dock Ellis, Gene Alley, Omar Moreno, Rennie Stennett and Bill Madlock. Thomas looks like he could still hit one out in that photo.

The design of this set really didn’t have a retro look on front. It has a very 1990s feel, though the cards were printed on thicker stock and lacked the glossy look of cards from that era, which was done on purpose. 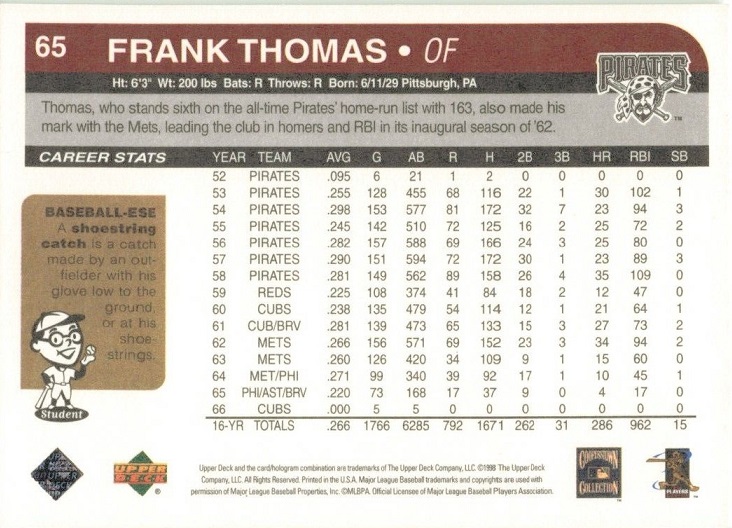 The back was designed to give the cards a retro look. It’s a bit interesting that they put him on a specific team. The Pirates would be the obvious choice because he played half of his career in Pittsburgh, but it’s also a throwback card that displays his entire career. Luckily they did use the Pirates, because you get that great logo on the back. You also get a cartoon bobblehead giving you a baseball fact, plus you get ten categories of his full career stats, sort of.

For some reason, they left off his 1951 stats. The easiest stat to use to see the lost season is triples. If you add those up, it has him with 29 career triples, but the career stats say that he finished with 31 triples. Or you could just count the amount of years listed and see that it is one short of a 16-year career.

What you might notice when looking at his career stats is that he had a really good season for the 1962 New York Mets. Depending on your level of baseball history, you might know that the 1962 Mets were historically awful. They finished 40-120, yet there he is driving in 94 runs for the team. Going by WAR, Thomas was their best player that season, just edging Roger Craig for the team lead with 2.5 WAR. That team actually had three Hall of Famers, with Richie Ashburn and Gil Hodges as players, and Casey Stengel as the manager.

This card isn’t easy to find on Ebay. Just five people have it for sale. You can buy it for about $3 delivered, though the early bird will get a better deal here, as other sellers have high shipping rates. One person has an autographed copy, though that will be sold before you see this article (unless it gets no bids/relisted). There are no sold auctions in the last three months, so this really isn’t a card you see often.