On this date in 1969, the Pittsburgh Pirates traded away pitcher Ron Kline for the second time. This time they sent him to the San Francisco Giants for pitcher Joe Gibbon, who himself was a former Pirates player at the time. Both trades worked out fine for the Pirates. Kline did his best work with the Pirates, compiling just 8.0 WAR in 9 1/2 seasons outside of Pittsburgh. His first trade came before the 1960 season and obviously the Pirates didn’t miss him that year, plus they got some value out of the return pieces (Gino Cimoli and Tom Cheney). After the second trade, Kline posted a -0.4 WAR for the rest of his career, while Gibbon put up 1.5 WAR over the remainder of the 1969 season.

That all being said, Kline had a nice career in Pittsburgh, compiling 12.2 WAR in eight seasons, despite missing two years (1953-54) while serving in the military. Today’s Card of the Day came out while he was performing his military duties. It’s also his rookie card, and it comes from one of the most popular Topps sets ever. Here’s a look at card #175 from the 1953 Topps set, featuring Ron Kline. 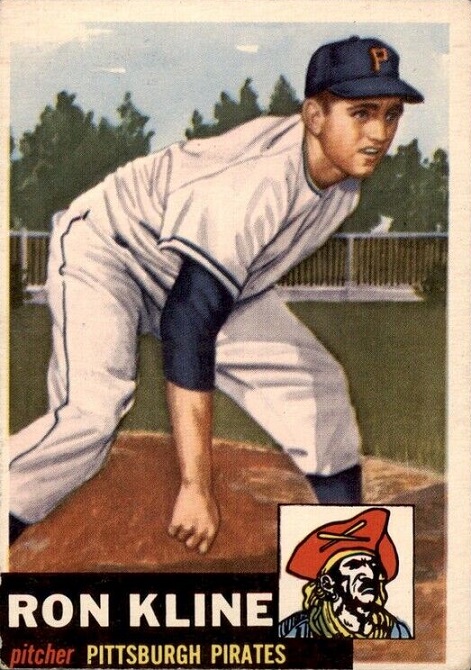 A lot of these cards have great artwork based off of actual photos. This Kline art isn’t their best effort from 1953. He looks a little generic here. Notice that Topps matched up the printing at the bottom to the team colors. They didn’t do it for every card, but they nailed it here, even though some of the artwork from early Topps got the team colors wrong. Pirates switched to the black & gold in 1948, but some of the early Topps cards still use the blue and yellow colors from previous years. Pirates need to bring back a logo similar to that one. This current logo is so boring. That one is just great. 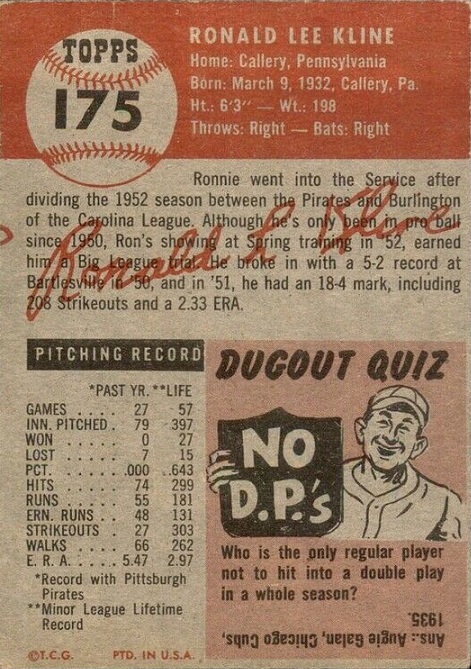 The backs of these cards have a lot going on, with the player info, a bio section, facsimile autograph, single season and lifetime stats and a trivia question complete with cartoon. By the way, that trivia question is not only impressive to see, but they short-change it a bit. Galan led the National League with 748 plate appearances that year. Note on career stats that they used his minor league stats. That’s because his 1952 stats were his entire big league career at the time.

There’s one interesting print mark here. Notice to the left that there is a red half football looking mark next to his autograph. That can’t be found on every card of his, but you can find it on a lot of them. My guess is that it is part of a different autograph from the card next to this one on a printing sheet. If the cut didn’t line up just right, it ended up on Kline’s cards instead.

This set is very popular, which also means that it’s easy to find cards in your grade/price range on Ebay. There are currently 124 active auctions and 58 sold auctions over the last three months. The highest priced one was $94 for a PSA 7 copy. Decent looking copies have ended in the $5-$6 range in the last three months, so that’s where you want to be if you just want to grab a collector’s grade copy.

As far as active auctions go, there are plenty right around $5 each, with some looking better than others. If you’re new to the older cards, just make sure it’s not the 1991 reprint set (the backs will be a dead giveaway). Some sellers will list “1953” in the title of those cards, so it shows up in the same search as the regular card. There’s a very interesting option on Ebay right now for the actual 1953 cards, where one card has the wrong back (showing Charlie Bishop). That’s going for just under $200, with a best offer option. The highest grade one currently listed is an SGC 8 and it’s going for $189. You can get a signed copy starting around $20. Kline lived to 70 years old, so he had time to sign, but he also passed away 20 years ago, so they are getting tougher to find.