Dave Parker has appeared in our Card of the Day series four times, but just two of those were solo articles. The other two times showed him with other Pittsburgh Pirates players. I already took care of his big card, featuring his 1974 rookie. Eight months ago, he was our first 1977 Kellogg’s card in this series. Today is Parker’s 71st birthday, so he gets his third solo article.

At first I was going to search through his card options, looking for something new or some set I haven’t used yet, but almost immediately I saw his 1976 Topps card and said “That’s my choice”, to no one in particular. I’m not a huge fan of the 1976 Topps set design, but I don’t hate it. It rates behind the 1970 and 1971 sets in the top tier, and just behind the 1974 set in the second tier. One thing that helps the overall appeal of the 1976 set is how bad the next four sets looked, as Topps got lazy with their designs (and photo quality in 1977, what an awful set), not knowing that two sharks named Fleer and Donruss were coming up after them. Topps was ready for them and came out with the great looking 1981 set.

I did not pick the 1976 card of Parker because I dislike the 1977-80 sets. I actually like all of his cards during that four-year run except the 1979 one. I picked the 1976 set because it has a great looking pose for Parker, who they caught in a game action shot. So here’s a look at card #185, featuring All-Star outfielder Dave Parker. 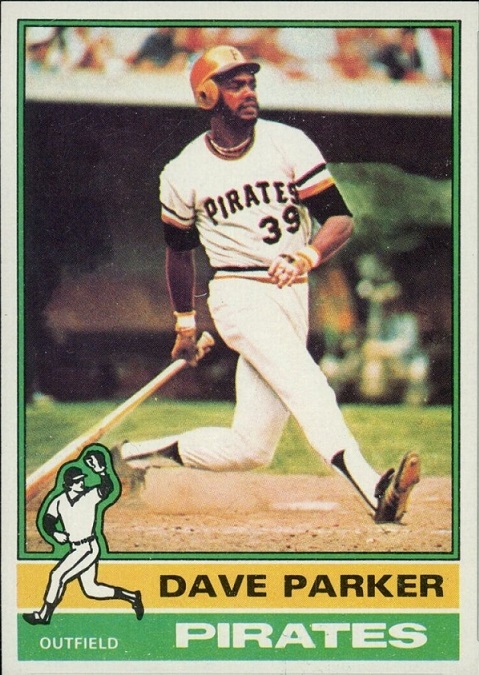 See that? I built it up and it didn’t disappoint. That’s a great action shot of the Cobra, no doubt lining a double in the right-center gap. I’m basing that on nothing other than where he is looking and the fact that he hit 35 doubles in 1975. What gives this set bonus points is the players in the bottom left corner matched up to the position they played. Outfielders would get that pose, while catchers would get a specific one, pitchers, etc. The design would be decent without that little guy, but it adds a nice touch to the card.

I always say I like when card designs match colors with the team. All of the extra green here makes it hard to say it goes well with the Pirates uniforms, but the box with Parker’s name covers the color match part nicely. I think that is why this design works well. The articles here always talk about how the Pirates cards look (especially the 1981 match) in each set, but when I talk about my favorites, I talk about the entire sets. Let’s face it, the Pirates cards almost always look the best, right? 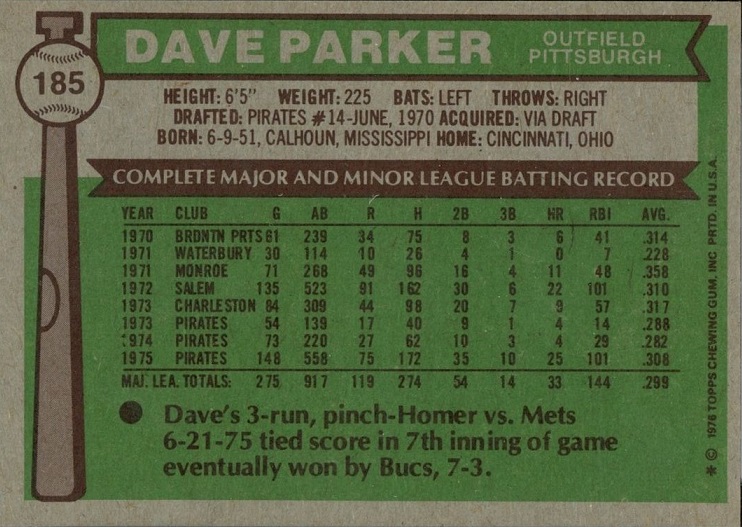 The back has a nice little baseball/bat design for the number and left side of the card. The actual print I can do without. The scan here is bigger than what you would see in hand, plus Parker didn’t have a ton of stats at this point. Imagine trying to read his lifetime stats, written all small, and in brown printing on a dark green background. Who came up with that color choice, I want to give them a bill for my last pair of glasses.

If you’re interested in this card, you’ll be as happy as Dave Parker on his birthday when you find out that Ebay has tons of options to fit your price range. There are approximately 150 options, including a very rare PSA 10, which has a $3,275 price tag. You go down one grade and you can get a PSA 9 for $170. A PSA 8 can be had around $50, which is also the top-end for his autographed copies, which go down into the $30-$35 range as well. If you don’t want a high grade copy, you can get a decent one for as low as $4-$5, with some lower grade copies going cheaper. This set trades fairly well, with 50 sold copies in the last three months.