Today’s Card of the Day featured player is Don Robinson, pitcher for the 1978-87 Pittsburgh Pirates. He has been featured here once before in this series. Considering that we are now 27 months into this almost daily feature, I’d say he is overdue for a second article. Not coincidentally, his last appearance was exactly one year ago today when we looked at his 1981 Topps card. We posted that on his 64th birthday. As you may have guessed, today is his 65th birthday.

Today’s Card of the Day comes from the 1982 Topps set. I was trying to find a set we haven’t featured here recently and found out the last player to get their 1982 Topps card here was Pascual Perez back in April of 2021. I think I sometimes try to avoid sets I like too much by not using them, but I think about using them often, so it doesn’t feel like it’s been so long. However, 14 months is long enough to go without looking at the 1982 set.

My search for Robinson’s 1982 Topps card led me to a fact that I forgot. I searched “Don Robinson 1982” and while scrolling through scan options to use, I noticed I wasn’t seeing any 1982 Donruss cards. They left him out of the set that year. Granted, he only pitched 16 games in 1981, but he was a regular before that, and that season was shortened by the strike, so 16 games isn’t quite as low as it sounds. I bought the Pirates team sets from 1981-1983 and put them in three separate binders/plastic sheets sorted by year first, then player, so at some point while putting together the 1982 binder I definitely realized he didn’t have a 1982 Donruss card, but it’s still interesting to note. 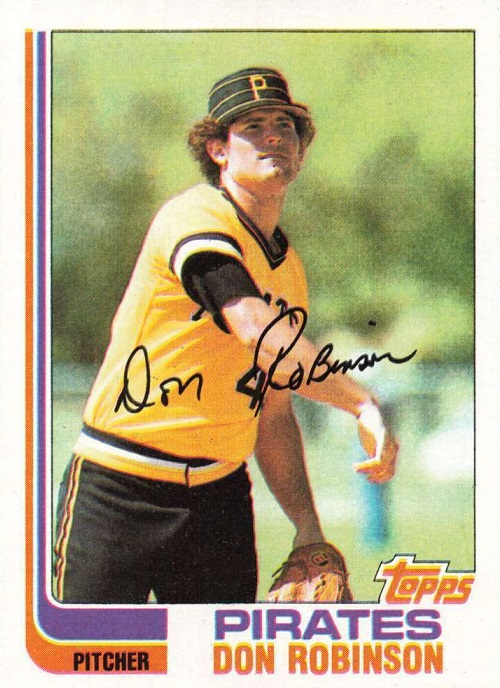 Many of the pictures of 1982 Pirates were taken during Spring Training in 1981 and they had some great action shots, along with different looking uniforms that were worn during Spring Training and not the season. That’s not the case here with Robinson. He is sporting my all-time favorite Pirates combo, black pants, gold top, pillbox cap.

I usually like cards more when the company matches up the front design colors with the team colors, but for some reason I really like the purple and orange with the Pirates here. I know I’ve heard from a few people who don’t like the look of this set design, but it is my third favorite from Topps in the 1980s behind 1981 and 1987. Those two are well out ahead, but if I tiered my rankings, the 1982 set would be ranked in the second tier, possibly by itself (1985 has a nice look too, so maybe it can go tier two). 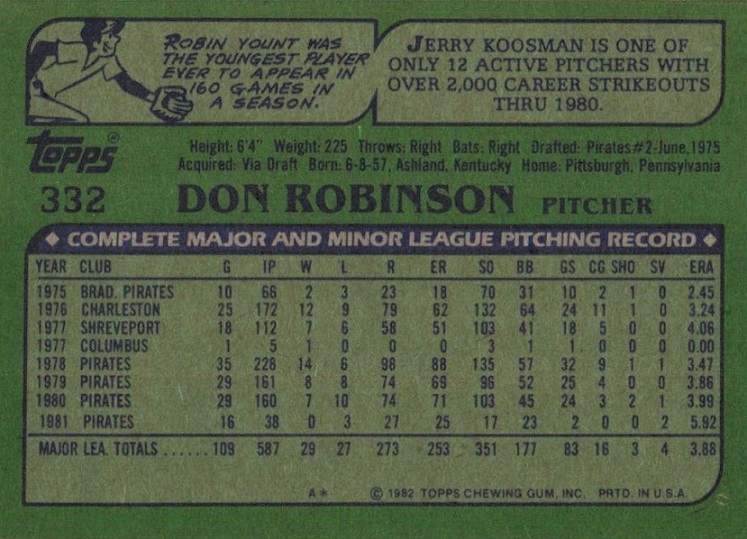 I’m not a big fan of the backs of these cards, mostly because they are a bit rough on the peepers with those dark colors on dark color combos. It doesn’t look too bad here, but a smaller card in hand, particularly those of a veteran player (check the back of Willie Stargell), can be very tough to read.

The trivia facts are interesting notes. I did not know that about Yount, though I may have been able to guess it based on what I know. I knew that the Milwaukee Brewers threw him right into the fire at a young age and I also know that people weren’t playing 160 games in a season before expanded schedules in 1961, so that eliminated a lot of baseball history. The only time 160+ games ever happened in the first 90 years of Major League Baseball was when teams used to play ties over, and even then it only happened three times. You needed a lot of ties for that to happen. The 1904 Detroit Tigers tied ten games and outfielder Jimmy Barrett played all 162 games that season, which gave him the single-season games played record for 57 years!

The other note is about pitchers with 2,000 strikeouts and being active. The first interesting part of that is that they stopped counting in 1980 for a 1982 card. What happened to 1981? Anyway, it made me curious as to how many active 2,000 strikeout pitchers there are right now. The answer is seven, though Madison Bumgarner is about to make it eight. As a side note, Don Robinson ended with 1,251 strikeouts.

If you’re interested in the Don Robinson card, there are some options beyond the usual “$2 for a common delivered” cards. There is a graded PSA 10 autograph for $105 or best offer. For $49, there is an error card, where everything black on the front design is missing, including the box around the photo, the facsimile autograph, and the word pitcher. That occasionally happened with cards in the set, but they are very hard to find. Then there are 10+ autographed cards between $6 and $14. Robinson has a nice autograph, though it can vary a bit at times, so do a little research before you buy one to make sure it looks legit. Most likely it is, as he isn’t an autograph someone would fake, but it’s always better to be sure.