Hall of Fame outfielder Heinie Manush spent parts of two seasons with the Pittsburgh Pirates, though his contributions in team history are minimal. The biggest note from his time with the Pirates was the ending, which happened on this date in 1939 (see today’s history article for full details). He was released by the Pirates that day so they could sign outfielder Chuck Klein, who is a fellow Cooperstown resident with Manush. The transaction that linked their careers ended up being the end for Manush in the majors. He was 37-years-old at the time and the Pirates used him just 25 times over his two seasons in Pittsburgh. He made one start during that entire time, which was just over a full year (May 15, 1938 – June 7, 1939).

Due to his limited play and the timing of him being with the Pirates, he is included in just one set that labels him as being with the Pirates during his playing days. That’s even a bit of a stretch saying that because the card is in the 1940 Play Ball set, which we covered here. Luckily for us, there was a set put out in 1979 that decided to show him with the Pirates. It’s an interesting choice because there were four much better choices for teams, and another team that is about the same. Today we look at the card set that has a few names, as I will explain below. 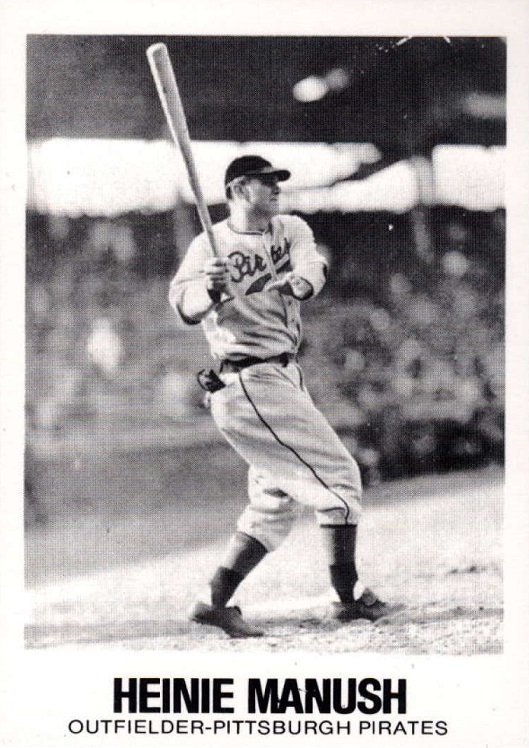 The company that put out this set is TCMA, a card company that produced many sets during this era, as well as a line of minor league sets that came out each year. You can often see this set referred to as Glossy Greats, but it also the name might have Renata Galasso in the title. More on the latter when we look at the back. This set had a simple colorless design with no frills, which was a common theme with sets put out by TCMA. They got a great black & white photo here of Manush. As you might expect from a guy who played over 2,000 games in his career, it’s a bit difficult to find images of him on the team he played 25 games with during that time. This is perhaps my favorite photo of him on the Pirates, mostly because the others I’ve seen aren’t action shots. 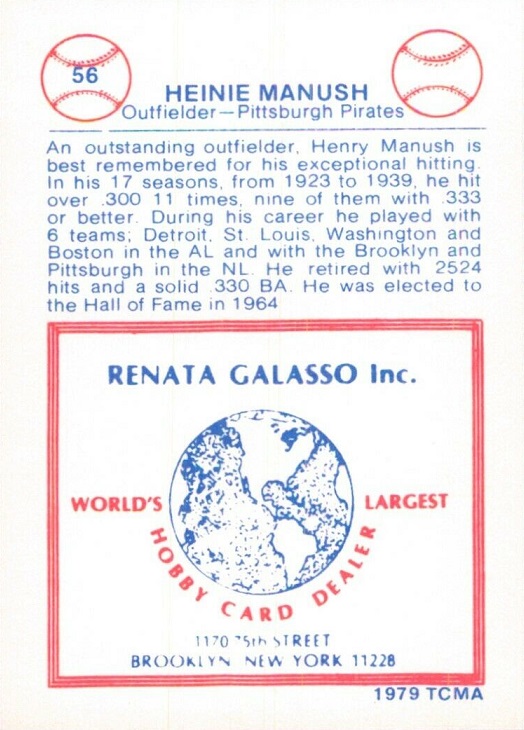 The back gives you a small bio of Manush and the photo explains the Renata Galasso name better. They sponsored the cards by putting their ads on the back. It’s interesting to note that there is no phone number there, so if you didn’t live near Brooklyn, you probably had to mail them a letter asking for a catalog or list of items and they would mail you something back. It’s definitely an interesting time if you think about it, because you were often buying cards sight unseen, relying on the dealer’s grading of the card. I did that just a few times that I can remember, with older dealers who never entered the 21st century, but still had amazing collections. Their grading was hit or miss, but if you ordered from them multiple times, you could adjust for their grade so you were never disappointed.

I like the wording at the end where it says “a solid .330 BA”. I use the word “solid” a bit different I guess. For players in his era, I’d probably put that word on guys who hit around .290ish. With the all-or-nothing style of current players, a .270 average would probably be considered solid. If you looked at all players in baseball history with over 5,000 at-bats, that .330 average is 26th all-time. If you expand it to guys with 8,000 at-bats, he ranks 19th all-time. His .330 career average isn’t solid, it’s elite in baseball history. Manush wasn’t much of a home run hitter, so he doesn’t get the respect he deserves, even as a Hall of Famer. He hit just 110 homers in 17 seasons, but that’s in addition to 491 doubles and 160 triples, which are both top 75 all-time. An interesting note about his career is that Baseball-Reference’s similarity score system says that the most comparable player to him all-time is Kiki Cuyler, a much more recognizable name in Pirates history.

This card is fairly easy to find on Ebay, and you might want to try different variations of the search terms “1979 TCMA Glossy Greats Renata Galasso” to find the cheapest example. There are a couple that are right around $2 delivered and nothing special as far as graded examples. Manush passed away in 1971, so you won’t find any (legit) autographed copies.