Today’s Card of the Day comes from the 1984 Donruss set, one of the most popular sets of the 1980s, produced right before card collector advanced to another level in popularity. The 1984 Donruss set became extremely popular within a few years of being released due to lower production numbers and the Don Mattingly rookie card, which really carried the set into another price range than most cards during that time. That was back well before Ebay and the internet made it much easier to find cards you wanted, which in turn knocked the prices of cards down.

Card stores were popping up everywhere during that time, but if they had a Mattingly rookie card you had to pay their price. Years ago I bought a stack of older price guides cheap and noted that the Mattingly rookies held steady around $100 for quite some time. That was only for his Donruss card though. Most people settled for the $25-$30 Topps or Fleer options. When I was young I used to get older sets as presents for my birthday and Christmas and I was only missing two from the 1980s before I refocused on much older cards. I still don’t have the 1984 Donruss set and the 1984 Fleer Update set. However, I got a Mattingly rookie card as a gift after the popularity wore off.

Anyway, the 1984 Donruss set is among the most popular of the 1980s. I’m not a big fan of the look of the set, but it marked an attempt to do something different. Donruss really phoned it in with their 1983 set, which was almost identical to the 1982 set front design. The 1984 set might not be great, but at least they tried something new. They did better over the next few year in my opinion, capping it off with my favorite Donruss design, the 1987 set.

One thing I like about the 1984 set is they added a subset of cards called Rated Rookies. In that subset was a 24-year-old outfielder for the Pittsburgh Pirates named Doug Frobel. He is celebrating his 63rd birthday somewhere today, unaware that his rookie card is being featured in this article. Here’s a look at card #38 from the 1984 Donruss set. 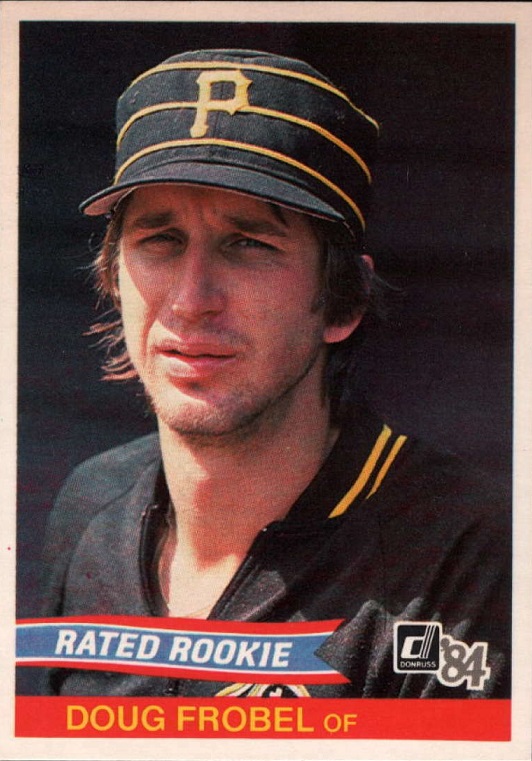 I’m not going to say anything bad about a big league player on their birthday, but I do wonder if they tell players ahead of time that photos will be taken. He looks like he wasn’t ready for picture time is what I am saying. Fortunately, those Pirates colors and the pillbox cap save everyone.

As you can see, this set design really isn’t much. They gave a big photo with a smaller border, and the increased size of the photo section is quite noticeable when you put it next to earlier Donruss cards. The name and position were at the bottom, and there was no mention of the team name. As with the previous sets, the Donruss logo changed to show the new year (always two-digit form), with the “Donruss” part staying the same. The Rated Rookie banner adds a nice touch that you don’t get with the rest of the cards in the set. 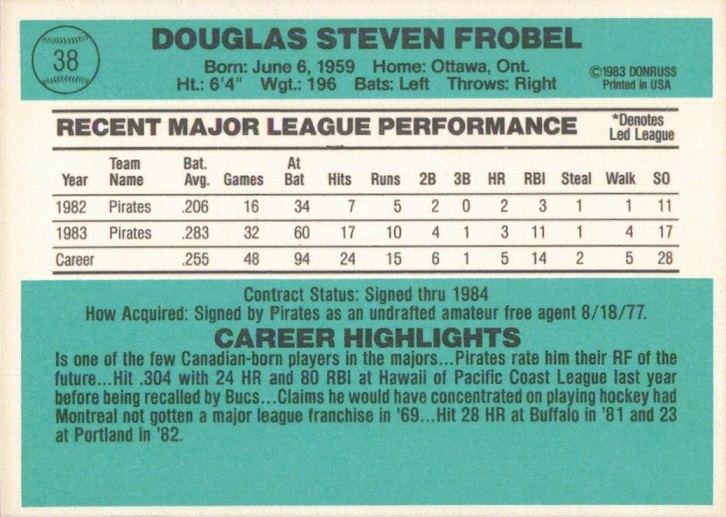 The back is typical of Donruss from the 1980s. Much like they barely changed the front from 1982 to 1983, they barely changed the back from 1982 through the rest of the decade and into the 1990s. You got five years of big league stats, unless the player hasn’t played five years yet, then you just got whatever they had and any room that could have been used for minor league stats is then taken away and the bottom part (that greenish/bluish section) is bigger. You see what they did with that bigger space, right? Yup, nothing.

The career highlights section is always full of interesting tidbits, but the contract status/how acquired section is much better. I’ve used that part for research on players when I couldn’t find any contract info on line. I guess for Frobel, the hockey fact is actually pretty interesting. We may have never known about him if the Expos didn’t exist.

There are 33 options for this card on Ebay, with many sellers listing individual cards all in one auction and you have to search for the player you want. So when you search his name, the photo won’t match the listing. Out of all of his listings, there is one signed copy and the asking price is $47 delivered. If you want an autographed card of him, then you should probably look for him in any other set because that price is based on these cards being tougher to find. After that auction, there’s nothing exciting with the rest. All are under $5 and it just matters what the people want to charge for shipping. Most of the options are under $2 delivered. One person even has two available for just under $2, so if you want to get one for your friend, or that guy at work who remembers Doug Frobel (I think his name is Fred?), then go for that listing.