If you were alive back in 1915 and into checking out the boxscores daily, you could open up any paper and see that the Pittsburgh Pirates defeated the Chicago Cubs by a 3-2 score on August 17, 1915. If you go to any source now and look up that date on the Pirates schedule, all you will see is that they lost 6-4 that day to the Cubs. Both of those things are correct. Here’s the explanation of what was a crazy week for the Pirates.

On August 13, 1915, the Pirates purchased pitcher Rube Benton from the Cincinnati Reds to help with their pennant run. Their record stood at 52-49 going into the day, which doesn’t sound great, but they were only 2.5 games out of first place at the time. Benton was a 25-year-old lefty in his sixth season in the majors. He was a steady workhorse pitcher on a team that was consistently below the .500 mark, so his record never looked impressive. At the time of the purchase, he had a 6-13, 3.32 record in 176.1 innings. The ERA sounds good, but that was the height of the deadball era and the league had a 2.75 ERA that season. The Pirates needed pitching help though and he was available…sort of.

After the announcement that Benton was picked up by the Pirates, it was said that the New York Giants were protesting his acquisition because they held a verbal option on him with the Reds from weeks earlier, made between the two owners of the teams. At the time, the Giants were in sixth place, though their 49-50 record put them just five games out of first place, so they were still in the race. Both the Giants and Pirates were adamant that they held the rights to the pitcher. The Pirates were said to have worked out a deal between the two managers of the clubs (Fred Clarke and Buck Herzog) and it went through Cincinnati’s team owner Garry Herrmann before becoming official. The protest by New York would require a meeting between the National League owners to settle the case.

The Pirates were sure that they were going to end up with Benton and he was with them in uniform the same day of the deal, as the two clubs were playing each other at the time, so he was just switching clubhouses. Four days after his acquisition, owner Barney Dreyfuss gave manager Fred Clarke the go-ahead to use Benton in the first game of a doubleheader against the Cubs. That game was played on August 17th, and I found the play-by-play for the event in the Pittsburgh. Here’s a quick summary for that day.

Benton’s time with the Pirates started with an error by infielder Jimmy Viox. He got out of the inning unscathed, though he issued a first inning intentional walk to Heinie Zimmerman before getting the final out. The Pirates got a single from outfielder Zip Collins and nothing else in the first.

The Cubs got two hits in the second inning, including a single by Hall of Fame catcher (and Cubs manager) Roger Bresnahan. Benton got a double play to keep them off of the board. The Pirates went down in order, including a fly out to right field by Honus Wagner.

Benton had an impressive third inning, striking out the side on 11 pitches. The Pirates couldn’t help him out though, going down in order themselves to veteran righty Bert Humphries, who was unknowingly just six weeks away from playing his final big league game.

In the fourth, Vic Saier tripled and then scored on a ground ball. He would end up finishing his career with the 1919 Pirates. The Cubs got a second run on an RBI double by Bresnahan. The Pirates went down in order to end the fourth, then the Cubs went 1-2-3 to finish the top of the fifth.

In the bottom of the fifth, Wagner led off with a double. Viox singled, then both Wagner and Viox scored on a double by Doug Baird. Benton then broke the tie with a single to score Baird, giving the Pirates a 3-2 lead.

The sixth inning was uneventful for both sides, as no one reached base. The seventh was the same, with the pitchers both making the final outs of the inning.

In the ninth, Saier singled to start the inning and moved to second on a misplay by Collins in center field. Benton then retired the next three batters in order, getting Bresnahan for the final out.

Immediately after the game ended, the Giants issued a formal protest with the league that the game should not count because they believed that Benton belonged to them. It was originally said that they would have a league meeting on August 20th, but his fate was held in suspense until August 24th, when it was decided by a panel of five owners (the ones not involved in the deal) that New York held his rights. The decision meant that the first game of the August 17th doubleheader was thrown out and would need to be replayed at a later date. The Pirates received their money back and the Giants had to pay out $3,000 to finalize the purchase.

The Pirates got some payback on the Giants the very next day when New York manager John McGraw decided to use Benton against the Pirates. He got hit around and knocked out early though, and the Pirates picked up a 9-7 win. The move to get Benton ended up working out great for New York in the long run. He stayed around for seven seasons, going 66-53, 2.79 in 1,012.1 innings.

I mentioned that Benton’s game was part of a crazy week, and that would have been enough on its own. However, the team played a total of 11 games over an eight-day period when he joined the team (August 14-21), with games in four different cities. They played a total of 26 doubleheaders between June 29th and September 22nd that season.

Here’s the boxscore from the game that no longer exists: 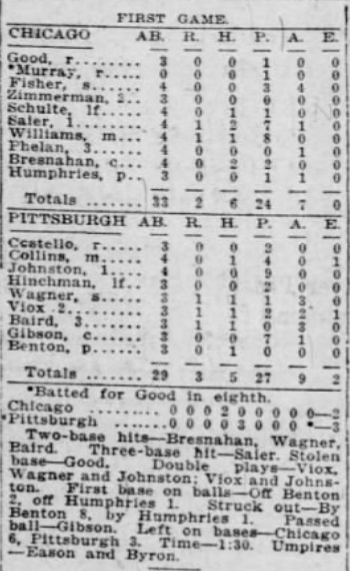 Here’s what is obviously an extremely rare photo of Benton in a Pittsburgh uniform. It’s the only one I found that showed a full body shot: 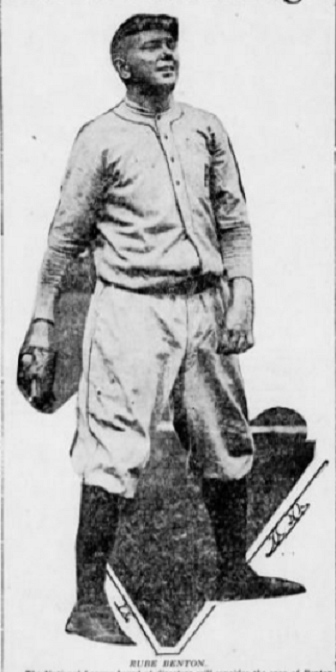