June 4th provides us with many Pittsburgh Pirates Card of the Day options to match up to the history from that date. On the birthday side, you have Tony Pena, Bob Klinger and Larry Demery. You also have the huge Ralph Kiner trade, where you could feature the all-time great Kiner, or most of the other players in the deal, though not all have options to use showing them with the Pirates. I went with Tony Pena, as you already knew from the title. He has been featured here twice before in this series, but I realized today that they were posted back on April 8, 2020 and July 19, 2020 (the dates are linked to the Card of the Day articles), so it has been a while.

Today’s Card of the Day is from the 1985 Fleer Limited Edition set. It was a box set, sold only in set form, and it included 44 cards. Some of the top names from the day were part of this set, which would include Pena, who was a perennial All-Star catcher and a Gold Glove winner. Exactly half of the players in the set have made the Hall of Fame, and that number could go higher as players like Don Mattingly and Dale Murphy get support from veteran voters, or Pete Rose eventually makes it in. For now we look at card #24 in the set, featuring Tony Pena. 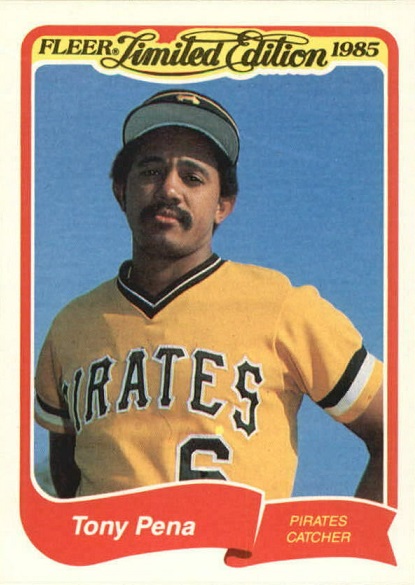 If you scroll through some scans for this set, you will see a nice variety of action photos, mixed in with guys who look happy and unhappy about getting their photo taken. George Brett, Pete Rose, Eddie Murray and Mattingly (to name a few) all look like Pena in this photo, while guys like Tony Gwynn, Jim Rice and Mike Schmidt couldn’t be happier about their photo. It really is funny to see the mix of expressions on these cards. I think Pena knew that the 1985 season was going to be a bad one, so he just wanted to get it over. Despite winning the Gold Glove and getting selected to the All-Star game that year, it was his worst season as a starter with the Pirates, and the team suffered along, going 57-104. 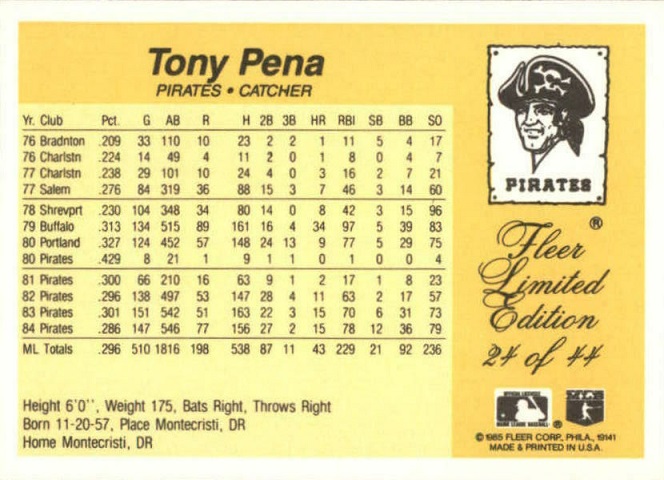 The back of this card definitely has a Fleer feel to it, as that is how they displayed stats on the back during this era. It’s a nice touch including all of his pro stats. The back looks like it matches up to the Pirates colors, but that was the same color combo used for all of the cards, so it’s just a coincidence. You have to love the big team logo, especially that one. Fleer had some fancy writing under the logo to tell you that this was their limited edition set and Pena was #24 of 44 cards. While they use the word limited, these cards are readily available and not as popular as the regular set put out that year.

Notice his birthday listed on the card. He was not born on November 20, 1957 (the year is correct). His birthday was incorrect at this time everywhere, so it wasn’t a mistake by Fleer. I don’t know when it was changed to the correct date.

If you’re interested in this card, it is one that obeys all rules and regulations of common cards on Ebay. There are ten options and multiple sellers have it for $2 delivered. The only auction of note is an autographed copy, for which the seller is asking $8 delivered. Pena has a nice autograph, so that might be one you want to check out. Your other option is to just go for the whole set, which will run you about $10. Not only do you get all of the Hall of Famers, Bill Madlock also represents the Pirates in the set.