I have featured a few modern autographed cards recently, with the same commentary that the autograph is nearly impossible to read. The one recent exception is the father-son card for Ke’Bryan Hayes and Charlie Hayes, and the older Hayes was the one with the exceptional autograph. While looking for a card to feature today, I wanted to pick one of the players who the Pittsburgh Pirates traded on this date in 2009 to the Atlanta Braves in exchange for Nate McLouth. We already posted Card of the Day articles for Jeff Locke and Charlie Morton here, so that left Gorkys Hernandez.

I can say that today’s choice really caught my eye, but there aren’t many other options for Hernandez on the Pirates. Even so, I picked this card because it was a modern player with a throwback autograph. Let’s look at the 2010 Bowman Platinum card of Gorkys Hernandez. 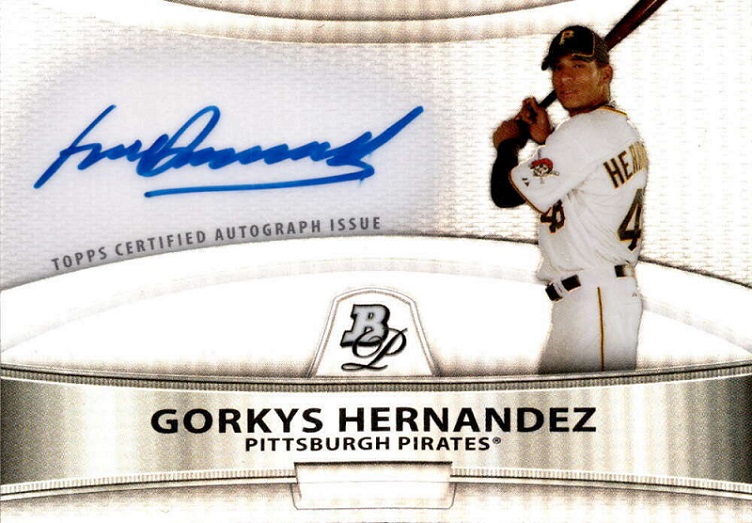 I really need to say two things about that autograph. It is great that he didn’t phone it in, but I would never get Gorkys Hernandez out of that in 1,000 guesses. It’s the look of the autograph that really hooked me here. So many autographs you see now look nothing like an actual autograph. Many look like a small child scribbled on the card, or even worse, they will just write initials. Even if you can’t read that autograph above, you can tell by the style of writing that someone signed that. Hernandez took his time with that, as well as all of the other examples I saw on Ebay while looking for a scan. I commend him for bucking the trend. Well done, my good man.

I don’t know what they were going with for the design here, but the all white look leaves open a lot of space for color changes on the tougher to find autographs, such as the green or blue versions (see pricing section below for more on the options). As I said, you don’t have many card options that actually picture Hernandez in a Pirates uniform, but this card has a nice look. 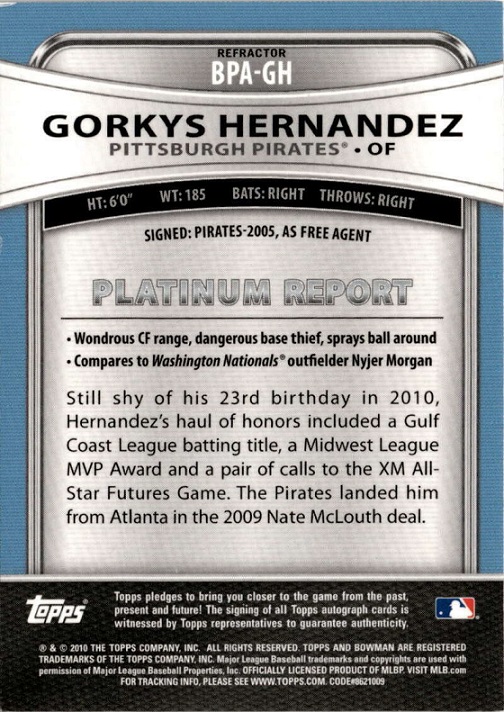 The back of this is a bit different from your typical autographed card. Usually they congratulate you on the card you received, or they take up a lot of space to guarantee that it is a real autograph witnessed by someone at Topps (or whatever company the card is from). That stuff all got pushed to the fine print at the bottom and instead they give you some facts on Hernandez, including one you didn’t know. Did you know that he signed with the Pirates as a free agent in 2005? You didn’t know that? That’s okay, neither Hernandez nor the Pirates know that either. He actually signed with the Detroit Tigers in 2005, then got traded to the Braves, before heading to the Pirates in 2009.

If you’re interested in this card, there are more options than what you see above, though they all have the same general look, just some color changes are involved. This version is the basic refractor version. Then there’s a green one numbered to 199 copies, a blue one with 99 copies and red with ten copies. There’s also a SuperFractor, which is a one-of-one card for every player, and a printing plate, which has four copies. Only the regular version, the green and blue are available on Ebay right now. You can get the standard refractor for around $5, though most sellers are asking more. The green can be had for as low as $5, though another seller has two for twice the amount, so you can pay more if you want. There are a few of the blue versions around $8 each.