One of my favorite Card of the Day articles we have posted is the one covering a 1960 Leaf card featuring Pittsburgh Pirates catcher Hal Smith. You might look at the title of this article, then at what I just wrote, and do a double take, but I assure you that they are two different cards. The first one, which was posted one year ago today, not only features catcher Hal Smith, it also shows catcher Hal Smith. If you’re an older fan, or you read today’s Pittsburgh Pirates History article already, then that last part didn’t make things more confusing.

The 1960 Leaf set has three cards of Hal Smith. One of them is Hal Smith, who was with the St Louis Cardinals at the time. He eventually played with the Pirates during the 1965 season. The second card is today’s Card of the Day, and that one has Hal Smith, who was one of the heroes of the 1960 World Series. The third card has both of them together, which is what we posted about one year ago today (see link above).

Today’s Card of the Day choice is a bit odd, because today is the birthday of the 1965 Pirates Hal Smith. He didn’t have any cards with the Pirates though, so it’s a bit hard to feature him in this series. I was actually trying to find a card of Hal Smith, a pitcher for the 1932-35 Pirates, but nothing was available. So we settled on 1960 Hal Smith, and once I saw his 1960 Leaf card, I knew I had to use it. 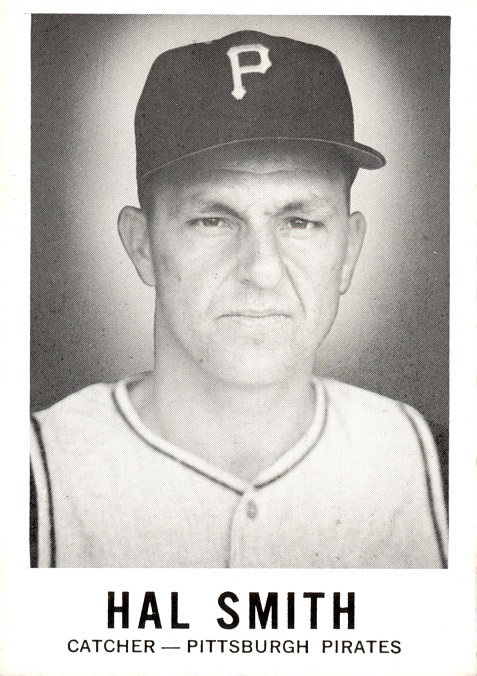 These cards were not the best looking cards from the era. Leaf looked like they want to create a cheap product in a market that was dominated by Topps. It’s a rather boring look, with a black & white photo of each player, their name, position and team in a white border around the photo, with a bigger border at the bottom. No fancy writing, no team logos, no color, just a simple looking baseball card set. The set featured 144 cards and they didn’t have many of the better players of the day, so between that and the look, it’s not extremely popular now.

What I think hurts the set is that all of the pictures look the same, with a portrait style photo and a black background, with a lighter background around the player’s head. At least the Hal Smith/Hal Smith card breaks up the monotony and really makes that particular card stand out. 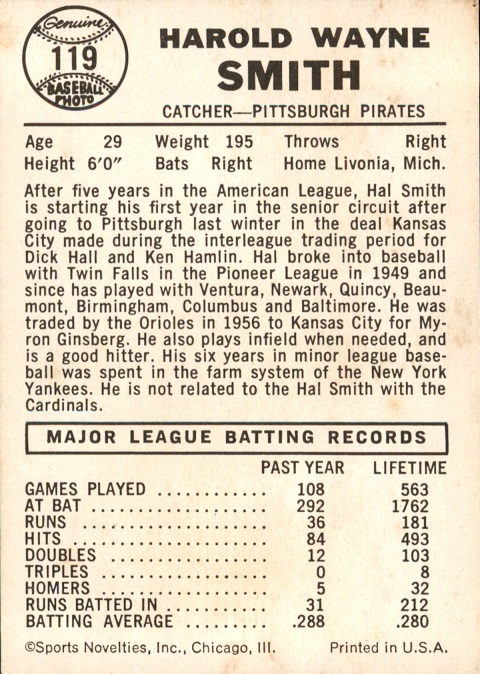 The back design is as boring as the front, but the give you a nice amount of info on each player, including their 1959 stats and their career stats. I like how the back notes that he’s not related to the other Hal Smith, as if the last name Smith isn’t the most common in baseball. Imagine a family sending two players named Hal to the majors at the same time. It would have been more likely that he was related to the older Pirates pitcher named Hal Smith due to the difference in their ages (they’re not related).

If you’re interested in this card, Ebay has a handful of options. The most expensive is a PSA 9 for $199. The price drops quite a bit to the next one, which is ungraded, but in nice shape. That one is $72, and it’s actually the one pictured above. There are three in the $40-$50 range, which are the only other ones currently up for auction right now. Three of these cards have ended in the last three months in the $23-$27 range, so you can probably wait out a cheaper example. As a side note, just one Hal Smith/Hal Smith card is up right now, though the price is decent at $40 plus shipping.