If you already saw today’s This Date in Pittsburgh Pirates History article, you know this is a slow day. Only two former players born on this date and no major trades or transactions. One of those players is Kenny Lofton, who made quite an impression during his brief time in Pittsburgh, but it was just that, brief. He’s been in our Card of the Day series twice already and he obviously doesn’t have a ton of card choices that show him on the Pirates.

The other former Pirates player born on May 31st is Joe Orsulak, and he has more choices. Last year on this date, we took the opportunity to feature a new set to the series. It was our first look at the 1986 Fleer set. I decided to go back to Orsulak and see if he had any other cards from sets that haven’t been featured here yet. I found two options, so if I think about it one year from today, I’ll get that other set out of the way using Orsulak again. For now, we look at a smaller set put out by Fleer in 1986 called the Star Sticker set. They were cards, but also stickers that encouraged collectors to completely ruin the value of the item, which in retrospect was fine, because they printed a lot of them. Here’s a look at card #83 from that set, featuring Pirates outfielder Joe Orsulak. 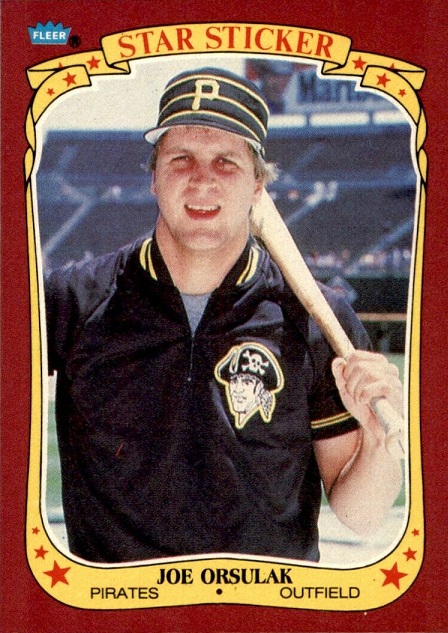 Orsulak has the look of someone who just finished batting practice on a hot afternoon and doesn’t think it’s the best time to take a photo. I thought that was a light jacket/pullover that he’s wearing because it looks like it zips down the front (at least part of the way), but then I saw the short sleeves. It’s probably something batting practice related, but whatever it is, I love the retro look, which obviously wasn’t retro then. That pirate is one of my favorites, and he’s on perhaps the best team logo ever. The pillbox cap obviously tops this picture off nicely.

The 1986 Fleer cards had a dark blue border and oval shaped bubble for the name/position/logo. These Star Sticker cards had a bit fancier design for the borders of the photo, but they left off the team logo (it’s not on the back either).

This set consisted of 132 cards and then came in packs, with 36 packs to a box and five cards per pack. So if you bought a full box of cards, there was a decent chance that you could complete the set. More on that in the pricing section below. 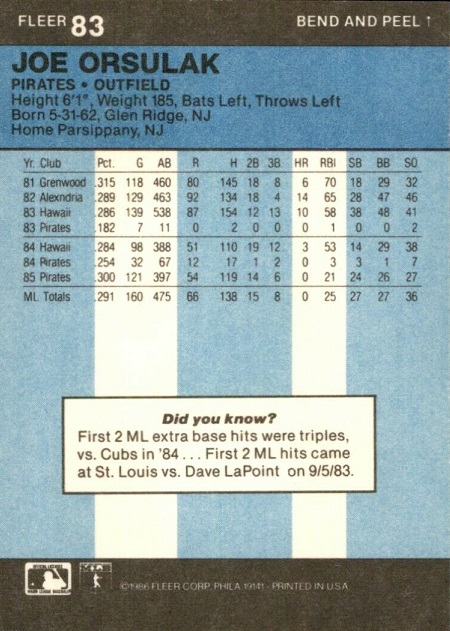 Look at the top right of the card. It is cringe-worthy to any collector. An arrow pointing up that says bend and peel. Oh the humanity! Don’t do any of those things!

You’re probably wondering how Orsulak got into a relatively small set of star cards with those hitting numbers. The .300 average helped his case for sure, and the stolen base total probably didn’t hurt as well. He was 23 years old and finished sixth in the Rookie of the Year voting, so the potential and high average made for a good combo. He didn’t do as well in 1986 and he was barely healthy in 1987, then was in the minors when he did play that season. The Pirates traded him for a poor return after the 1987 season, then he went on to have a solid little career as a role player, spent mostly with the Baltimore Orioles.

If you’re interested in this card/sticker, you’ll be happy to know that the price is low enough where you can actually bend and peel the card and you won’t miss the money spent. I don’t encourage it, but these cards will always be easy to find, so you won’t be doing any harm for future collectors. There are 17 total listings for this card and most are around $2, just watch the people who change $3+ to ship one common card. The only auction of note is an autographed copy and that can be bought cheaply for $6 delivered. Don’t bend and peel that one please.

I mentioned up top that these came in wax boxes with 36 packs. You can buy those for $35-$45 delivered still. I know I would have trouble opening up packs that old, even with lower value cards, because unopened packs do have value too. These a group of collectors who deal in unopened packs, so some people would have a problem with opening them. As a kid I would have never been able to hold on to these cards, but around 17-18 I bought some slightly older boxes of cards, like 1992 Topps Stadium Club, and I didn’t opened those. Still have all of the boxes I bought unopened. It would be fun to get a box of the Star Sticker cards and see if you can get the entire set, but I will say that the set can be had for $25, so the packs are probably left better unopened if you get them.