Today’s Card of the Day celebrates one of six father-son combos in Pittsburgh Pirates history. Everyone knows Ke’Bryan Hayes, who is in his third season with the Pirates as their third baseman. Most of you know of Charlie Hayes, though I’m sure not as many people remember his time with the Pirates. He was signed as a free agent by the Pirates for the 1996 season, then got traded to the New York Yankees before the season was over. It was a short stay, during a season that wasn’t so memorable. The older Hayes is celebrating his 57th birthday today, so we celebrate the occasion by looking at the 2016 Bowman card that pictures both father and son, which is autographed by both of them. 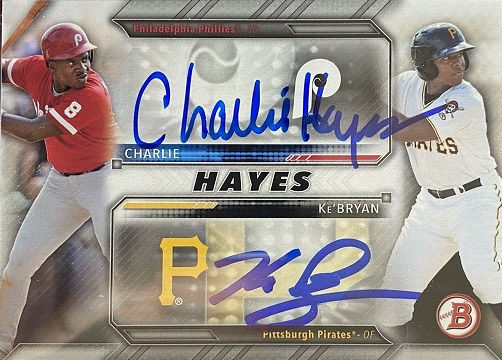 Charlie Hayes pulled off a bit of a power move here, as his autograph goes right on to the picture of his son. I’ll note that I saw a few other scans of this card and this was the only one where his autograph went into his son’s photo, so it was a subtle move, just a reminder that he put in 14 seasons in the majors.

I point out the differences between autographs from older and newer players a lot here, and this is a perfect example of what I’m saying. Charlie Hayes is barely an older autograph. He played into the 2000s, but it was still the era of autographs you can read. You look at that and you know it is Charlie Hayes. That’s a beautiful autograph. If I showed you the autograph of Ke’Bryan Hayes on an otherwise blank piece of paper and gave you no clues, you might not even guess it’s an autograph at first. I can guarantee that there is zero chance you would think it is a Ke’Bryan Hayes autograph.

Trust me, I’m not singling out young Hayes at all, these two autographs represent the eras of which they played, except Charlie Hayes is in a group that goes back hundreds of years. Ke’Bryan is in a group of 97% of current players who have autographs you can not read. It really is a shame because autograph collecting is fairly popular now. I will say this for Ke’Bryan, I’ve seen better autographs from him on cards signed in person. So you do have choices if you want something you can tell he signed.

This is really a great looking card. I’m big on history, and one thing I like is family connections with the same team. You can see our list of 26 groups of relatives to play with the Pirates. I use the word groups because two of the relative connections have more than two players. This would have been nicer if they got Charlie Hayes on the Pirates on this card because of that connection, but having him on the Philadelphia Phillies makes more sense based on his career. At least he wrote over the Phillies logo… 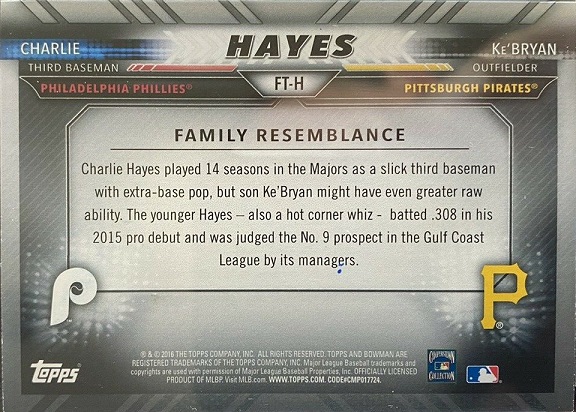 The back has a small amount of info for each player, as well as the logos for both teams. It’s a good thing that they mention that Ke’Bryan is a hot corner whiz (get your mind out of the gutter), because they list him as an outfielder in the top corner of this card. You have to remember that at the time this card was released, Ke’Bryan just turned 19 years old and he had no full season experience yet, so he was still a long way from the current player. He also had a rough ending to the 2016 season, suffering a back strain that sidelines him for over a month, followed by a cracked rib two games after he returned on rehab, which ended his season. Before you get worried, he made it to the majors in 2020.

If you’re interested in this card, there are different versions. One card is numbered to 25 copies, and someone is selling #2 for $250. The card I used above isn’t as rare, but it’s not cheap either. They other two signed copies have asking prices near $100. You do have another option that might interest you if you’re a budget collector, but you like this card. There is a regular base card in the 2016 Bowman set that doesn’t have the autographs, but looks the same otherwise. There are tougher/limited versions for the regular card as well, but the base card can be had for around $4-$5 delivered.