Today’s Card of the Day comes from a set we haven’t looked at here, as well as a first-time player in this series. Kirk Gibson was a very good player whose career often gets overlooked because he’s known for his World Series homer. Injuries for him ruined what could have been a possible Hall of Fame career. I once long ago grouped him in with Harold Baines and Tony Oliva, as players who could have made it to Cooperstown if they didn’t have knee injuries that limited their value. Then Baines and Oliva went on to make the Hall of Fame recently. I’m not predicting that for Gibson, no one has ever mentioned him as a potential Hall of Famer, but it’s interesting to note that he had 38.4 career WAR, while Baines put up 38.8 and Oliva finished with 43.0 WAR. Baines got there by compiling, while Oliva put in just slightly more time than Gibson, but the three fit nicely as a group because of common overall value and the career-changing knee injuries.

While Gibson is underrated overall, his time in Pittsburgh is remembered just right. The Pirates traded veteran pitcher Neal Heaton to acquire Gibson, then Gibby lasted until May 5th before he was released. He batted .196 with two homers and five RBIs in 16 games. He retired for a bit, but then returned to the Detroit Tigers, where he had the best years of his career. I’m sure the 1988 season makes it feel like his time with the Los Angeles Dodgers was the best, with his MVP award and then the home run, but he had 27.7 WAR with the Tigers. He also homered twice in game five of the 1984 World Series, including one off of Goose Gossage, which was the clincher for the Tigers, so he already had a famous homer that gets forgotten outside of Detroit (and probably San Diego for opposite reasons). In honor of his 65th birthday, here’s a look at card #481 from the 1992 Pinnacle set featuring Pittsburgh Pirates outfielder Kirk Gibson. 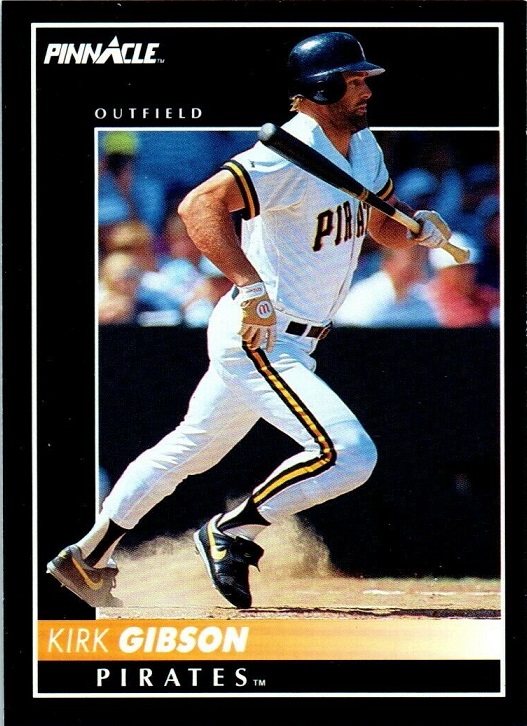 Pinnacle went with the all-black design here, even separating the photo from the border with a white box twice to give it a unique design. Gibson’s foot and his head are both outside the original photo, but still inside the border. The box color for his name is matched up to Pirates colors and that’s something that they did for every team.

The Pinnacle set was put out by Score and it was released in two series for a total of 620 cards, with Gibson ending up in the second series. He was already gone from the Pirates before most people were seeing this card. It’s interesting to note how quickly things changed for Score. When they came out in 1988, their set was groundbreaking in a way, pushing the quality of cards to a different level. However, Upper Deck came out the next year and that bar was pushed much higher. Score didn’t have long to celebrate their time at the top. This set was their way of competing with other higher quality sets, like Topps Stadium Club, Fleer Ultra and Donruss Leaf. Baseball cards really took off during this time, but at the same time, they were so mass produced that very few hold any value. 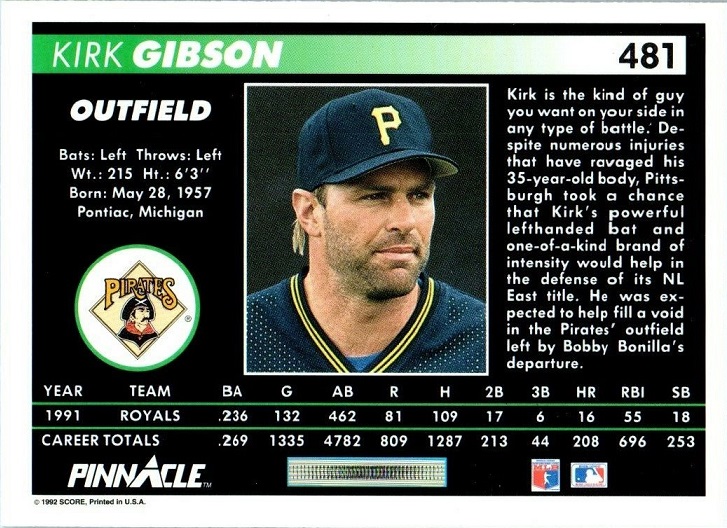 The back continues the same color design as the front, except they decided to use white borders on the back. The second photo is almost always a nice touch. The Pirates logo from that era is one of their best as well. I’m not a fan of the one year/career stats setup like that, but with so many products out there, you can find his year-by-year stats elsewhere. That bar at the bottom says Pinnacle with a decoder, which sounds crazy now, but there were worries about counterfeit cards in the industry back then, so every card started getting anti-counterfeit additions.

If you read the bio section, it is written like they already know that his time in Pittsburgh didn’t go well. I don’t know the exact release date, but I do know that the Pirates picked up Jeff Robinson from the Texas Rangers on June 10th and he’s in the second series with the Rangers. His card mentions that he won an Opening Day job, so the bios were probably being written in mid-April.

This card is your typical Ebay common card that obey the laws of common cards on Ebay. There are only ten listings and half of them have shipping that is too high, the other half can be had for $2 delivered or less. There haven’t been any sold copies in the last three months. I guess his brief time in Pittsburgh wasn’t memorable enough to make people go out and get a card of him on the Pirates. Or maybe everyone is choosing to go for his other Pirates card put out by Topps in their Stadium Club set.