If you saw today’s This Date in Pittsburgh Pirates History article already, you may have noticed that there isn’t much going for May 27th. Four former players born on this date and they are all rather obscure in Pirates history. No transactions of note, or games that need to be covered. That left limited card choices to match up to the history article today, especially since I’ve already used two of those players in these articles.

I was going to include outfielder Jacob Brumfield for a second time and just cover a set I haven’t used in this series yet. I settled on his 1996 Score card, then couldn’t find scans that were good enough to use. That got me looking at the 1996 Score Pirates cards and I realized that they really hit a home run that year. Score included some great action shots on their cards. I was looking for a Pirates team set to possibly purchase by the end of my search for a good set of scans to use here. Obviously nothing against Jeff King, but he only made it here because he was the first player I was able to get good scans of, for both the front and back. Here’s the previous Jacob Brumfield article if you want to check out his 1996 Donruss card. As for this article, let’s take a look at card #452 in the 1996 Score set, featuring Jeff King. 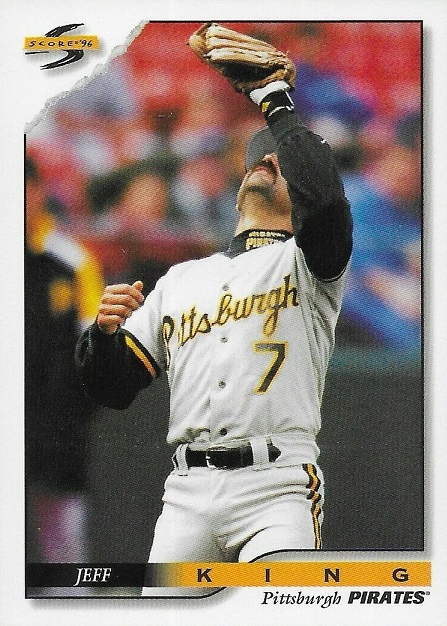 The action photos from this set are what convinced me to just use anyone from the Pirates, but I like the look of the set as well. Using the Pirates colors for the name at the bottom always plays well on the card. However, check out the Score logo at the top. That isn’t just a coincidence, they actually switched up the logo for each team to match the colors. Very well played, Score. The ripped photo in the top left corner is interesting and different. I also like the shadow effect around the photo in the border. This is really an underrated set that I might have to revisit sooner.

The King photo is a nice game action shot, though they usually don’t use pictures where the player’s face is blocked out like that. They make up for that on the back. I’m a fan of those jerseys with the cursive Pittsburgh across the front and the uniform number. 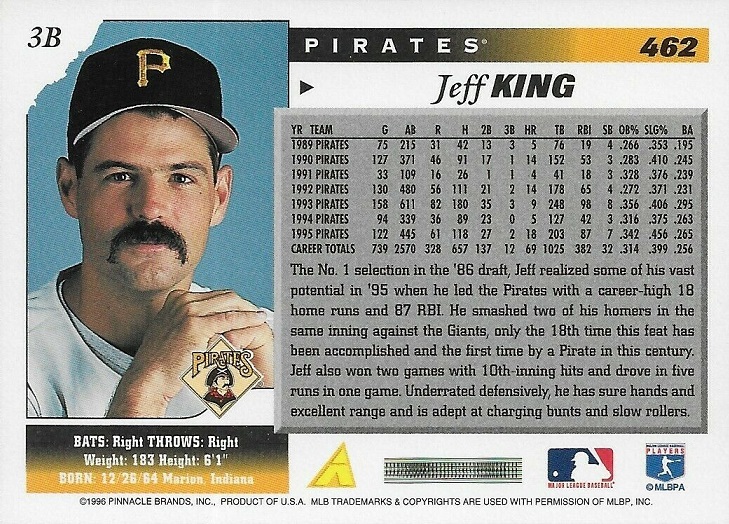 First thing I noticed here is that the ripped photo is a theme they used for this set. Second photos of players are always appreciated, and they got that great Pirates logo used during the 1996 season. That’s another added bonus point.

What I don’t like here and it isn’t as obvious in the big scan, is that the back is difficult to read. They squeezed a lot of info on there and used black ink on a darker gray background. Get a pack of these cards in hand and you’ll be straining to read them by the end. That wasn’t well planned. There’s an interesting addition in the stats there that you don’t see often. They list the total bases, placing it oddly between homers and RBIs, which are two stats that are always side-by-side (obviously not always because of this set).

This card is a common card and all rules pertaining to common cards on Ebay apply here. You will probably pay about $2 to get one delivered, which is in everyone’s budget. You can actually get a signed copy right now for $2.34 delivered (tax not included in that price). Just watch for sellers who have huge shipping rates. I just said it recently, but it’s worth repeating. A card like this can be securely shipped for 93 cents. You shouldn’t ever pay more than $2 total to get a common card delivered. The auction will be over before you see this, but someone has the team set for $4.49 total without any bids. Ten cards and it includes players like Jay Bell, Carlos Garcia, Denny Neagle, Al Martin and Orlando Merced. That seems like a good purchase considering the photo quality.