Today is the anniversary of one of the best pitching performances in big league history. On this date in 1959, Pittsburgh Pirates starter Harvey Haddix retired the first 36 batters he faced. The game didn’t end as he hoped, but he forever etched his name into baseball history with that outing. Last year on this date, we looked at a special card from the 1961 Topps set that celebrated his career game. Today we check out Haddix on a card produced by the Ted Williams Card Company, which was established in 1993. They put out a set of 160 cards including some active (at the time) players and a lot of all-time greats. Haddix is on card #75 from that set. 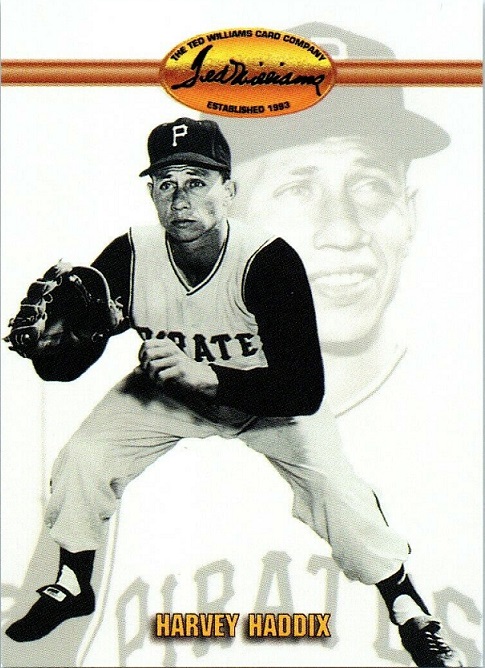 The fronts of these cards had two photos of each player, one being a bigger photo that served as the background and was a much lighter photo. Then there was a smaller (but not small) photo of the player in front of the background photo, and that one was a better quality photo. It’s a great look, especially on some of the cards that got two action shots of the same player. The rest of the front design was the logo for the Ted Williams Card Company and then the player’s name at the bottom. It looks like they matched up the Pirates gold to Haddix here, but that was the standard color used for all names. They utilized a borderless design, which was the style at the time (that last part was said like Grandpa Simpson in my head). 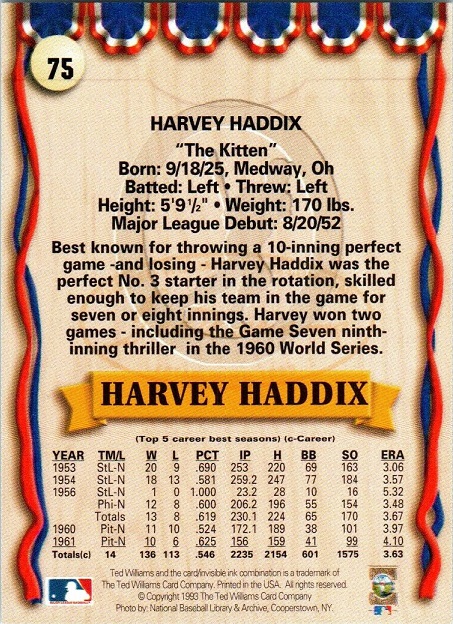 This card has a cringe-worthy mistake right at the top of the bio section. Poor Haddix is remembered by most for just one game and then this set goes and butchers the details by saying he went ten perfect innings. That last sentence of the bio section could use some help too, maybe parenthesis or a comma. It sounds like he won two games.

I don’t mind the way they chose to display stats here. It was something different. I decided to check whether or not those five seasons were actually the best of his 14-year career according to WAR. I eliminated the hitting/fielding aspect of it because they were just looking at pitching. The seasons went in chronological order, not potential value order, so I’m just checking to see if 1953, 1954, 1956, 1960 and 1961 make up his five best seasons. I’m giving the actual order here:

So the card got three of his best five seasons by WAR. As for the other two years, his 1961 season just missed with 2.5 WAR, so we can give them partial credit there. However, the 1960 season comes in at 11th place with 0.8 WAR. Part of the difference there is expansion being introduced into baseball in 1961. The ERAs around baseball went up, so his 4.10 ERA in 1961 is actually a better season compared to league average than his 3.97 ERA in 1960, when the league had a 3.76 ERA. He also had a better WHIP in 1961, despite those numbers rising as well.

This card is inexpensive because it was produced in 1993 when card companies were overdoing things. You should have no problem finding this card for $2 delivered, even if some other readers beat you to Ebay to get their copies. A recent sale for this card shows an autographed card that was graded and authenticated. You won’t find many Haddix autographed cards from this set because he passed away on January 8, 1994, so there wasn’t much time for him to sign many. Surprisingly, the dealer only asked $34 delivered and as you would expect, someone scooped it up quickly.