The Pittsburgh Pirates acquired pitcher Dick Littlefield on this date in 1954. He stayed around until the early part of the 1956 season when the Pirates sent him to the St Louis Cardinals for young outfielder Bill Virdon in a deal that worked out great for the Pirates. Littlefield hasn’t been used in our Card of the Day series before and he’s not going to be a regular. That’s because he had an exclusive deal with Bowman and didn’t appear in any Topps sets until 1957. Bowman didn’t produce a 1956 set, so your choices for Littlefield with the Pirates are a 1979 TCMA card, and today’s Card of the Day, his 1955 Bowman card. That’s okay for today, because I’m a huge fan of the 1955 Bowman set, so I don’t mind featuring it here. 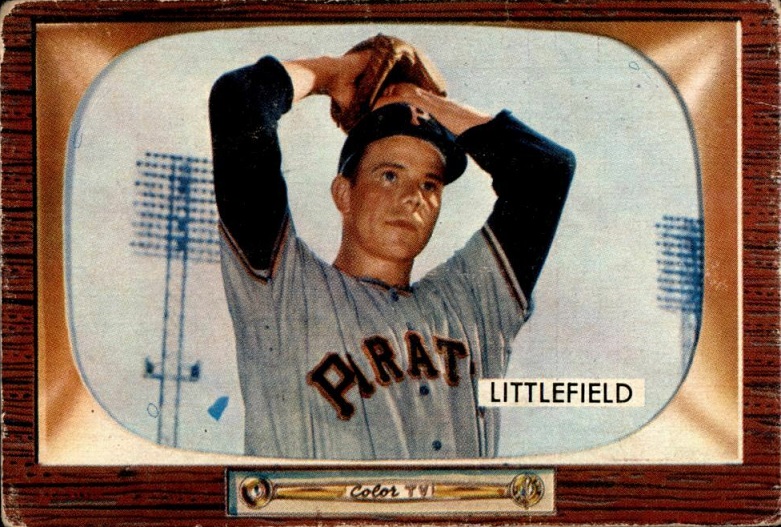 It occurred to me when I was looking for scans that I don’t need to feature high grade cards every time. Why not show a card that fits every budget. This one has rounded corners, a little scuffing, but an outstanding picture, and that’s what matters the most in my opinion.

The 1955 Bowman cards jumped on the amazing design idea to use a color TV, which was basically a brand new concept when these cards came out. Most people who could afford color TVs, were just getting them as these cards were being released. According to something I just had to look up because I wasn’t around in the 1970s, black and white TVs made up more of the TV sales in the U.S. than color TVs each year through the early 1970s. So Bowman really hit one out of the park with this idea and the set is still very popular to this day. I also personally like the horizontal layout on cards. Notice that the front here only include the last name of the players. 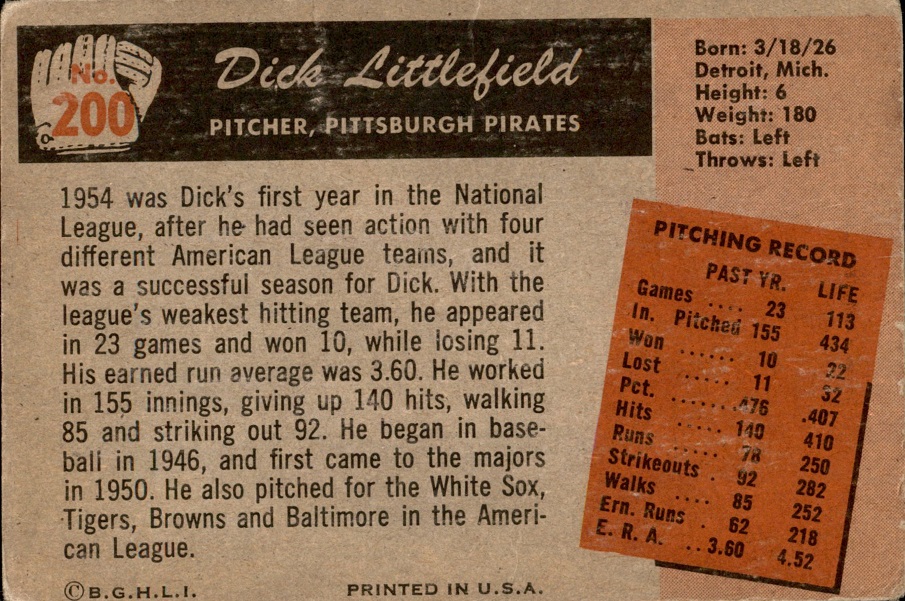 The back here has some scuffing as well, but you can read everything important, so that’s all that matters with the lower grade cards. The bio here leaves a bit to be desired, especially when they really limited available stats already, then they take up most of the bio with just repeating the stats. There could have been a mention about how he got to the Pirates, or stats from previous years.

I do like the setup of these backs though, so I give them credit there. I don’t like when newer cards only show one year of stats and career stats, except in rare cases like the great 1993 Fleer Ultra design. However, it was standard practice on older cards, so anyone getting these cards would have been used to this type of setup. Can’t hate on them for that.

I really didn’t have to show a low grade card for this particular one to feature a card that is affordable. This set is still extremely popular, so dealers always have inventory on Ebay. That being said, only 23 have sold in the last three months, compared to 175 listings, so that keeps the prices down. If you want a really nice one, you’ll have to pay up, as the higher grades will go over $100. A few PSA 7’s are on Ebay and you can get one for around $40. For that same price, you can also get an authenticated autographed card, or a little less without the authentication, but compare the signatures first and make sure the dealer is reputable before purchasing. If you just want one like in the scan, you can pay between $2 and $3 and there are multiple cards in that range.