Today’s Card of the Day is actually for a birthday coming up tomorrow. If you saw today’s This Date in Pittsburgh Pirates History article, you would have noticed that it was a little light on the info. Only two birthdays and no transactions of note. For once I decided to check what was coming up on the following day. Some days have multiple choices for potential Card of the Day subjects, which is how we ended up here, looking at a card of Brad Lincoln on the eve of his 37th birthday. Today’s set is called Tristar Prospects Plus, and this is the dual autographed Farm Hands card, signed by Brad Lincoln and Tim Lincecum. 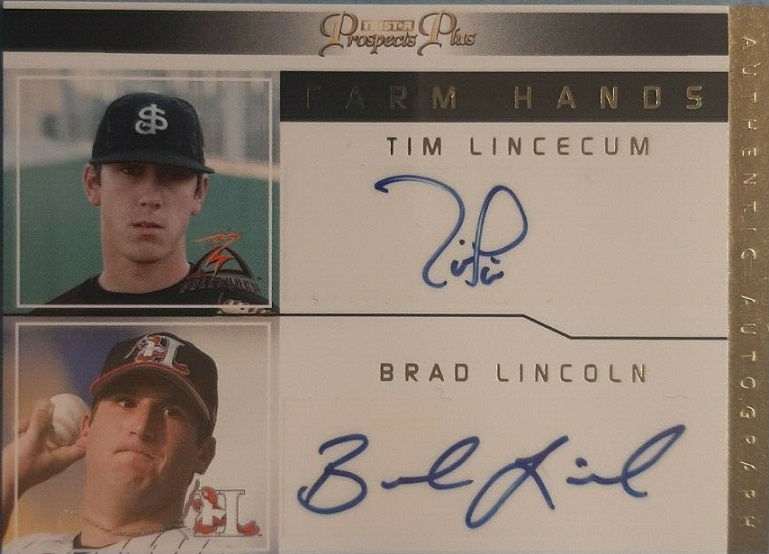 The 2006 draft could have gone much better for the Pirates, including them picking Tim Lincecum. Of course it could have been even better than that with Clayton Kershaw or Max Scherzer being later picks. It also could have gone worse than Lincoln, including two picks who I remember being mentioned as possibilities and they had negative career WAR numbers. Lincoln put up a cool 0.4 WAR during his career and got the Pirates the popular Travis Snider in a trade too.

The draft is a real crapshoot, plain and simple. The first two picks that year combined for 2.2 WAR. The Pirates selected Jared Hughes in the fourth round and he had a higher career WAR than 36 of the 44 first round picks that year. Current Pirates catcher Roberto Perez was picked in the 29th round.

Now obviously it’s not a safe assumption that the 2006-era Pirates would have developed Lincecum into a Cy Young winner. It seems like all of their big money pitchers from that time got hurt (don’t make me list them), but let’s pretend that they did develop him and his career would have went the same in Pittsburgh (just go with it). Lincecum really had a short peak, which surprised me last time I looked. Living through it, the big years seemed to be more than just 2008-2011. In fact, his 2008-09 Cy Young years were much better than the 2010-11 years, though I’m not saying those were bad, they just don’t compare to his peak. He put together 15.5 WAR total in 2008-09. That’s quite impressive. What you might not believe, but you can go check if you want…he finished with 19.5 career WAR. Yes, in his other eight seasons in the majors, he averaged 0.5 WAR per year. I mentioned the 2010-11 seasons were still good years, so if you add them to the Cy Young years, you get (no lie) -2.5 WAR for his other six years. If someone told me that, I wouldn’t have believed them either.

You were right to double check my work, I just hope you included the batting numbers to get the exact numbers I used too. It barely changes it because pitchers didn’t get many at-bats or fielding chances (he had 19.9 WAR for pitching alone), but it does.

As for this card, notice that they only use minor league logos. That’s because Tristar had a deal with Minor League Baseball only for these cards. They couldn’t use big league logos or big league players, including players on the 40-man roster who were in the minors. This set also included Andrew McCutchen, shown on the Hickory Crawdads just like Lincoln.

I’ll admit that these autographs are better than most current autographs, but they are still bad. Makes me wonder if this was the start of the downfall or it happened earlier. Lincecum’s autograph looks like Zi Pi, while Lincoln made me think of Bud Lit, the modern improved version of Bud Light (I don’t drink beer, so maybe Bud Light is actually good). 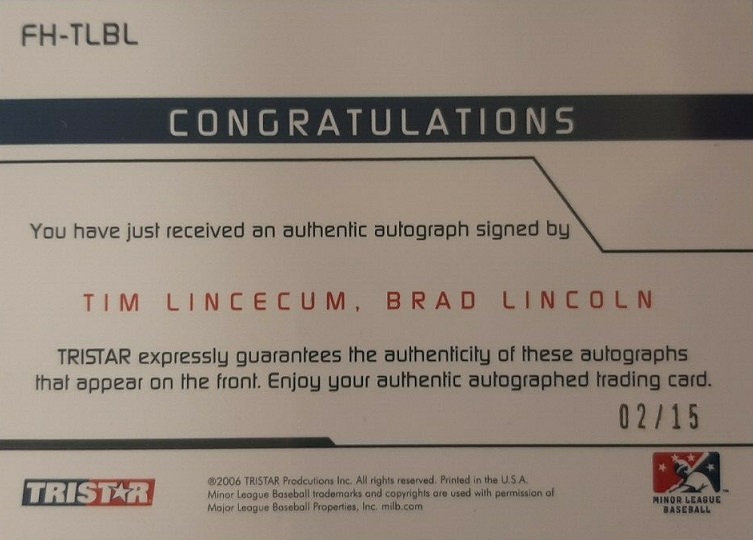 The back lets you know what you received and they give you the guarantee that the scribble on the front was done by the two players pictured next to said scribble. The back also tells you “02/15”, which means this is card #2 of 15 copies printed. I like that they included the Minor League Baseball logo, don’t often see that on cards.

This card in the scans is the only copy available for sale right now, and unless it gets relisted, you might not even be able to find it. The seller is asking $109 in a regular auction setting that ends before you will see this article. It has no bids currently, so it might be relisted now. There are other Tristar listings for Lincoln without Lincecum included, including autographed cards and ones with game used pieces, so those might be of more interest, especially since they cost about 20x less.