Today’s Card of the Day features a former Pittsburgh Pirates player who is still with the team. Well, first he left to play baseball elsewhere, then retired, then came back. Vic Black turns 34 years old today. He was the 49th overall pick in the 2009 draft, which was still technically a first round pick that year. That same year, Bowman featured him on a baseball card, which we will look at today. I didn’t use the base card for this feature. Instead I went for the slightly tougher gold version from the set.

Black had a brief stint with the 2013 Pirates, getting into three games before he was part of the trade that brought Marlon Byrd to the Pirates for the 2013 playoff run. He pitched for the 2013-14 New York Mets, had some injury issues, pitched for the San Francisco Giants during his comeback, as well as some indy ball, before retiring to take up coaching. For the last two years he has been with the Pirates, working with the lower level pitchers. His official title is Minor League Pattern and Throwing Coordinator. Today we are going back to his first days in the system, looking at card #BDPP68 from the 2009 Bowman set, featuring Vic Black. 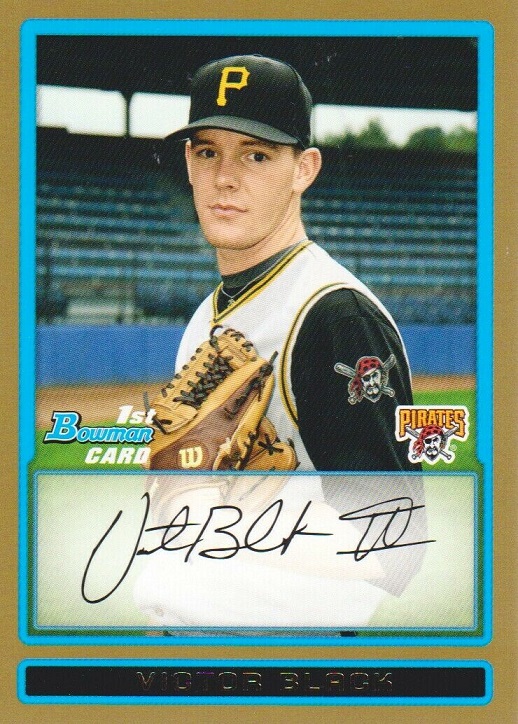 As you can see, the border here is gold. The normal card in the set had a black border. I wanted to avoid that because of the last name, though it’s technically just the base card, so you wouldn’t mention the border color except here where we look at the designs of the card. A search on Ebay also turned up tougher to find cards with red, orange, purple and blue borders.

I’m a big fan of these first card Bowman cards, where they get draft picks and international signings during the very early stages of their career. The only problem comes in later years when a majority of them never make the majors because that’s what happens to prospects in the lowest levels of the minors. Black made the majors for two seasons, making him more of an outlier in these sets than an expected outcome. Basically, this 2009 set (and other years as well) have a lot of players who are only remembered by those who follow baseball closely down to the minors. On the other hand, it’s a nice consolation prize for those players who didn’t make it, because they still have these great cards from their career in pro ball.

I have to mention how Bowman did a great job here of getting the logo on the sleeve, as well as putting the team logo on the card. I might dislike the current team logo, but you can’t get much better than the regular black and gold hats like that one. There is better, the pillbox caps, but these are still the bee’s knees. 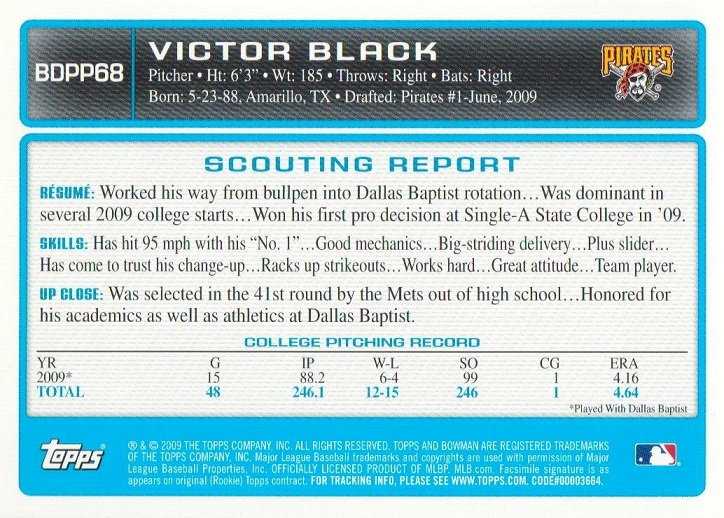 The back of these cards have scouting reports for these players, who many people were hearing about for the first time. If you remember seeing Black in the minors, he had a bit of a funky delivery, and a big stride was part of it. His pro career got sidetracked early, as his 2010 season was limited to two starts due to a shoulder and then a biceps injury. I was at his second start on May 22nd taking notes of every pitch, and then it ended after six batters in the first inning and he didn’t pitch again in a game until 2011. He eventually rebounded nicely, getting up to 97 MPH during the 2012 season, which helped lead to his big league time.

If you’re interested in this card, you have plenty of choices on Ebay. There aren’t as many $2-$3 options as you would assume, but that’s mostly because a lot of sellers have shipping charges that are higher than you should be paying for one common card that can be safely shipped for 93 cents. Some of the highlights for the different variations include a high grade (graded 9.5) red refractor card for $40. An orange refractor, which was limited to 25 copies, for $18. A gold refractor (50 copies) for $12, with two options at that price. An x-fractor card, which has 199 copies and the basic black borders, is $11. Blue refractor (99 copies) can be had for $9, with two options at that price. A purple refractor can be found with three options in the $6 to $8 range. Then when you get lower in price, you find the gold version shown above, as well as the common card.