There aren’t many years of Pittsburgh Pirates baseball lacking representation in our Card of the Day series. Most of the early missing years just don’t have any cards, as the card industry went through a dry spell from 1891 through 1908. There aren’t many options for Pirates cards during those years, but there are still some sets I need to get to for the first time. After that point, the only downtime was the war years (WWII) when paper drives were a thing and cards weren’t being produced.

We’ve done a good job up to this point getting lots of players and sets in this series, but I noticed that we had nothing for 1917. That was another year where not much was printed, but I should have had something by now. So to apologize to all of you fans of the year 1917, we are going big today with the greatest player in team history. Here’s a look at Honus Wagner, during his last season as a player, pictured in the E135 Collins-McCarthy set. I just recently posted an article here with Wagner, but I wanted to get something from his playing days. He’s kind of a big deal in baseball history, so it’s okay if he appears here often. 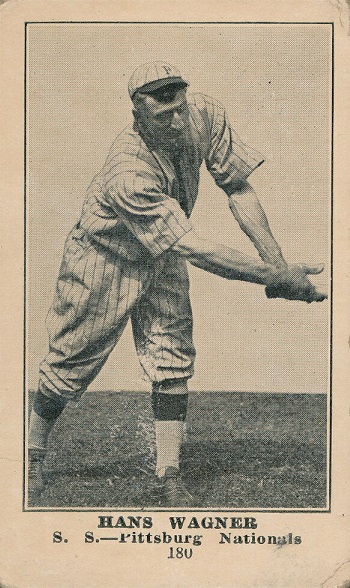 There’s a lot to unwrap here at the bottom of this card. Many people don’t know it because you grow up hearing “Honus” Wagner all of the time, but he was often referred to as Hans Wagner. As proof of that, I searched the term “Honus Wagner” on Newspapers.com and it came up with 14,558 references during his 18 years as a player for the Pirates. I changed the search to “Hans Wagner” (in quotes each time so they are mentioned together) and 63,383 references came up. Clearly the name Honus was used often, but it was not even close to the preferred spelling. Those results don’t even include the people who used other forms of his first name.

The other thing that should throw people off is the spelling of Pittsburgh, and that’s true even if you know that they changed the spelling from 1890-1911. This card is from 1917, so someone should have received the memo by then. The third thing is the “180” at the bottom, which is the card number. A lot of old sets went with basic designs like this, but getting a real photo of a player wasn’t that common back then, so you didn’t need to do much to impress. Other sets used real photos and went big with the design, such as the T204 and C46 sets, just to name two of my favorites.

This photo has the appearance of the 1912 home uniform because the angle of the photo makes the front difficult to see. I knew by looking at it that the other option was the 1913 road uniform. The Pirates only used pinstripes for the 1912-14 seasons and the 1914 season had different socks/stockings. The 1912 are easy to tell straight on because they have Pirates written down the front middle, the first time that the team name appeared on the uniform. The 1913 road uniforms have light gray uniforms, which will look the same in the old photos as the white uniforms. They had blue down the middle, which this photo has some coloring down the middle. The two uniforms had similar socks and hats as well. So I went to Google and found a clear full size image of this picture, which made it easy to tell that it was from 1913. Not only was it labeled (can’t always trust that), but in the original picture at full size, you can see the letter “P” on each side of the collar, which they did not have in 1912. 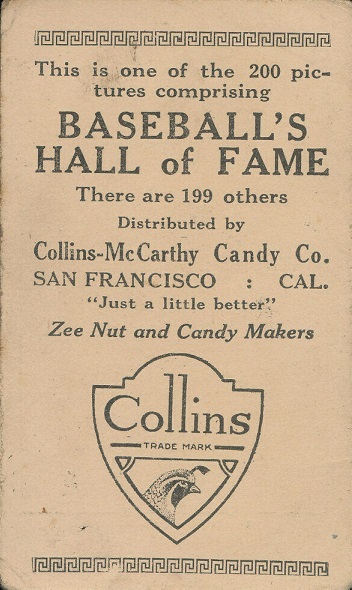 The back of old cards sometimes had great advertisements. Now it’s a bit unnerving to know that they released cards that kids collected with cigarette ads on the back (some on the front), but those companies supplied some of the greatest card sets ever made. Collins-McCarthy was a candy maker. The “E” in the E135 set designation denotes that they are “E”arly candy cards, and the ad here tells you that they were a Candy Co. and their ancient company shield had a bird with part of a golf club sticking out of its head. Good stuff. Also, the back lets you know that there are 200 cards in the set.

There is only one option for this card on Ebay and I pulled the scan from that card. The asking price is a cool $8,000 with $3 shipping. One graded a “3” by Beckett Vintage Grading ended for $5,333 back in February. You can get a reprint for a few bucks, or you can check reputable auction houses, who will feature a card like this on occasion. Even if you find a low grade one, it’s going to be expensive. There are a lot of collectors the lower you go in price for this card, which keeps it from ever going cheap.