Today’s Card of the Day features Pittsburgh Pirates pitcher Mace Brown, who pitched seven seasons for the team, but often gets remembered for one pitch. He gave up the famous Homer in the Gloamin’ to Hall of Famer Gabby Hartnett on September 28, 1938, which was a tough loss for the Pirates during a season in which they were in first place for most of the second half of the season. The game itself didn’t cost the Pirates the pennant, but they went 1-4 after it happened and lost the pennant by two games.

Allowing a solo homer in a regular season game to a Hall of Famer shouldn’t define your career. That’s especially true when you give up 44 total homers in ten seasons, make and All-Star team, and give up two years for service during WWII. So today we celebrate Mace Brown, who was born 113 years ago today.

Brown doesn’t have a lot of card options that show him on the Pirates, despite putting in six full season and one partial year. One of his cards came during that partial year in 1941. His lone previous appearance here was his card with fellow pitcher Bob Klinger in the 1941 Double Play set. That set used black & white photos, and the cards contained a small bit of information on each player. The 1936 R312 Goudey set is nothing like that card. It’s a much bigger card, with pastel coloring for the photos, and no information on the players. Here’s a look at Brown’s card from that set. 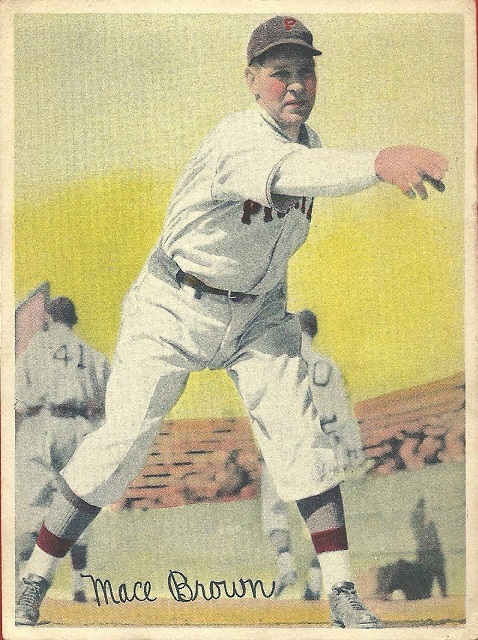 I tried to find the original of this photo, and I think I found one from the same day. I was trying to figure out if those players were Pirates players in the background, and also what that “0” number could be. If it is a Pirates player, which it appears to be according to the possible same day photo I found, the #41 is Guy Bush, another player more famous for allowing a solo homer in a regular season game to a Hall of Famer (hint: It was the last homer of the greatest player ever). The “0” player has three choices and one seems unlikely. Pie Traynor was #20, catcher Earl Grace was #30 and pitcher Red Lucas was #40. Lucas is the only pitcher in that group, but that doesn’t look like his build. Grace might be possible, despite the lack of catching gear, but maybe it’s Traynor, who was the manager at the time. Lloyd Waner also wore #10, but that player doesn’t look much shorter than the 6’0″ Guy Bush, and Waner was not a big man.

Anyway, these cards are one of those sets where you like them or hate them, but in many cases, it gives you a cheap(er) way to acquire a Hall of Fame card. They are semi-popular because of that fact, but also because they have some unique multi-player cards. Here’s a good example (scroll down in the link). Here’s another good example.

One other thing here before we look at the prices. Umm, what’s going on with his hand? Is that a shadow or did they give him a large hand and forget to color it in? Either way, it looks strange.

This card is plentiful on Ebay for a card from 1936. You have ten options, and only two have sold in the last three mothers, going for $27 and $35 apiece. The current ones range in price from $40 for a low grade copy, to $144 for a high grade (ungraded though) copy. My favorite one listed is an autograph copy (with a COA) for $79 or best offer. Brown lived a long live, passing away in 2002, which was well into the period of autograph seekers, so he’s not a tough autograph for someone who played pre-WWII. That being said, there aren’t a ton of autographed cards of him, so if I was interested, I’d be making an offer on that one.