Today’s Card of the Day features a player who might be the most underrated in team history. I know the title gives it away, but if I asked you to name the only player in Pittsburgh Pirates history who has put up at least an .850 OPS in every season with the Pirates, while playing 7+ seasons with the team, I’m willing to bet your first, second or even tenth guess wouldn’t be George Grantham.

Grantham played infield for the 1925-1931 Pirates, helping them to two World Series appearances during that time, and his worst season at the plate was 1927 when he had an .850 OPS in 151 games. If he just reached that .850 OPS minimum in all seven seasons, he would rank 14th in team history in OPS. He did better than that. There’s only one player in team history who has a better OPS in more plate appearances that Grantham and that was Ralph Kiner, who won seven straight home run titles to start his career, while averaging 110 walks per season during that time. Kiner had a .775 OPS in his first season with the Pirates, so he didn’t reach that .850 minimum each year. I’d say that puts Grantham in good company.

Grantham has been in this series once before, taking a look at his 1928 W513 card, which is an ugly card (sorry if you’re a fan). He’s not going to be a regular in this series because there just aren’t a lot of options. One of his other cards is basically the same as what you will see below, just released a year later, so I will probably never use that one. Another “card” during his time in Pittsburgh is a Cracker Jack pin issued in 1930 that still shows him with the Chicago Cubs, where he last played in 1924. I might use that one here some time, just because it’s an oddity. There’s another really good one from 1929 that I’ll be sure to feature (probably a year from today), and then there’s a rare 1931 card where he’s on one card with three other Pirates greats. I couldn’t find a scan of that, otherwise we would probably be looking at it today. What we are looking at is his 1925 Exhibit card. 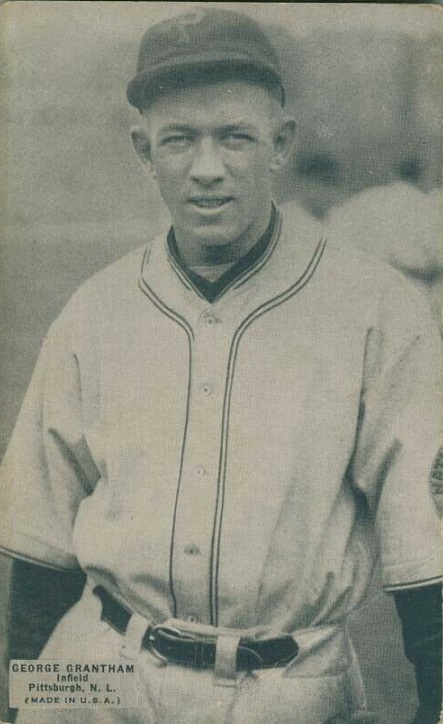 The back of this card is blank, so you’re looking at the entire thing here. There were no borders on the card, so the front design was just a full photo, with that box in the bottom that tells you the player, position, team and that the cards were made in the U.S.A. The company (Exhibit Supply Company of Chicago) that distributed these cards didn’t even put an identifier.

This is a photo of Grantham from the 1925 season, which can be told by the smallest clue in this photo. If you look on his left sleeve, you will see a tiny part of a patch. That is the 50 years of National League baseball patch that all of the NL teams wore than season. Now you’re probably thinking, you can tell it’s a 1925 photo because he was in his first season with the Pirates and it’s a 1925 card. You really didn’t need to know about the patch (it’s good info though). That’s all true, but like I said up top, this card was reissued in 1926, so that info would be helpful for that set. Also, there’s no year on this card, and they didn’t have checklists floating around back then, but if you knew about the 50 years patch, you could date this photo.

You have two options on Ebay for this card. One low grade copy with a crease and stain sold for $28 back in March. That’s the only completed auction in the last three months. As far as active auctions, they are much higher. An SGC 1.5 is $115 delivered. A PSA 4 is $495 delivered.