Brandon Inge was a very good Major League player who had a forgettable end to his big league career with the 2013 Pittsburgh Pirates. Today is his 45th birthday, so we won’t dwell on the bad today and instead we will focus on our Card of the Day, as we feature Inge here for the first time in this series. Today’s set choice is also a first-time feature here.

The 2013 Topps Update set was produced well after the season started, giving Inge a card that showed him on the Pirates. He signed with the Pirates on February 13th that year, after finishing the 2012 season with the Oakland A’s. He played his first 11+ seasons in the majors with the Detroit Tigers, then was done with baseball 15 months later, so a large majority of his cards show him on Detroit. His card in the regular 2013 Topps set showed him with the Oakland A’s, even though he became a free agent on October 29, 2012. The Topps Update set gave you a chance to see Inge in a Pittsburgh Pirates uniform, even though by the time these cards were being released, he was already done with the Pirates. I went with a special card from the set, as you will see below. 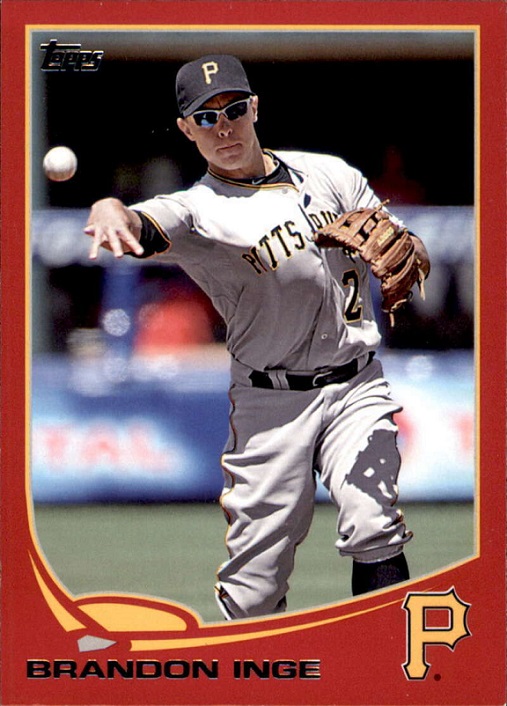 The standard 2013 Topps Update card has white borders. If you bought these cards at Target, they had a specially produced set with red borders, which are harder to find. You could also get the cards from Walmart and they came with light blue borders. Everything else with the card design was the same.

It’s a nice little design idea from 2013, with the home plate and infield (maybe whole field?) in the bottom corner, over the name in foil, along with the team logo. I really wish the Pirates would come up with something better than the current logo. It’s not that I hate it, more that it is so boring compared to the previous three logos that they used dating back to 1967. 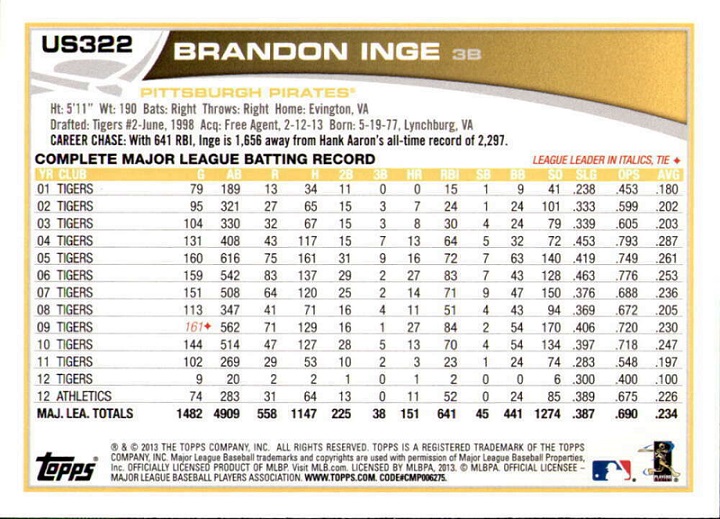 I like that career chase part under the section with some personal bio info, but they really should have made it bigger because I doubt Inge would have retired if he knew how close he was to Hank Aaron’s RBI record. The backs weren’t any different for the specialty cards from Walmart or Target, so these cards really were just the same except the border color. You’re seeing almost all of Inge’s career stats there, just missing his 50 games with the Pirates. They aren’t overly impressive, but when you consider that he was extremely valuable on defense, not only for the quality, but the versatility as well, you see someone who was a very good big league player at his peak.

If you’re interested in picking up a 2013 Topps Update card of Inge, you have more options than just the patriotic red, white and blue we have already mentioned. Right now Ebay also has examples of a gold border insert card that is tougher to find than the white border version, as well as an emerald version that is tougher than any of the others mentioned here. Single common cards from the 2013 Topps Update set are not in high demand, so that keeps the price down for all of these cards, regardless of print run. There are tougher variations that were numbered fewer than 100, but none of those are available on Ebay right now. Those probably will have some type of premium attached.

There are only three of the red border cards available, and due to shipping charges, you can’t get it cheaper than $5 on Ebay, so it’s probably best to wait if you really want this version. You’re talking about a card worth $1 on a good day. The emerald version has the same pricing issue, while the gold, blue and white versions can all be found between $1.50-$4 delivered, with multiple options in that range for the blue and white. Only two 2013 Topps Update Inge cards have sold in the last three months on Ebay. Both were the white border, and both went for about $2 delivered.