Today’s Card of the Day comes from a set that should have been utilized here more often by now. The 1914-15 Cracker Jack sets are iconic in the vintage baseball card collecting world. Common cards go for hundreds in low/mid grade, as you will see in the price section below. The best cards can easily go into five figure price tags depending on condition. Shoeless Joe Jackson cards will get into six figures because there are many more collectors for his cards than there are 1914-15 Cracker Jack Joe Jackson cards in existence.

There are plenty of collectors who will mention these sets as their favorite all-time, and numerous others that have it in the top five sets all-time. The 1914 are a bit more desirable because people want earlier cards of players, and also because they are much tougher to find in comparison to the 1915 set. The 1914 set is slightly smaller (144 vs 176 cards), but their total population is likely less than half of the total of all 1915 cards. So not only are 1914 cards harder to find as a group, finding specific cards is also tougher.

One of those cards that appears in both sets is one that pictures Pittsburgh Pirates pitcher Babe Adams, who was born on this date in 1882. He has appeared in our Card of the Day series twice already, but the last time was exactly one year ago today, so it has been a little while. With 50.6 WAR in 18 years, Adams has the highest WAR for any pitcher in Pirates franchise history. He ranks second all-time for the Pirates with 194 wins, and his total of 44 shutouts is a team record. Here’s a look at Adams on card #76 from the 1914 Cracker Jack set. 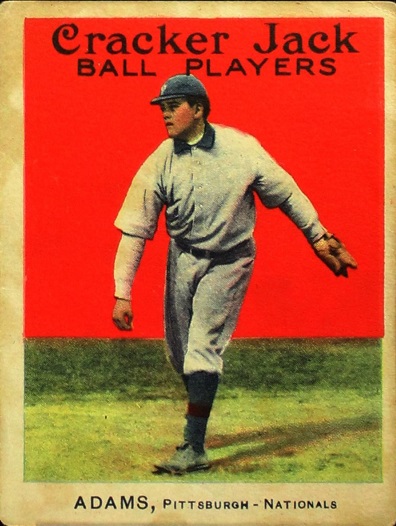 These cards are hard to find in nice shape because you were getting them in a box of Cracker Jack, so you can imagine that there were a lot of these cards that weren’t even in mint condition out of the box. Add to the fact that the person who got them was eating Cracker Jack, and you have cards that end up with staining like you see above.

The bright red backgrounds of these cards are eye catching, and they have varying degrees of artwork quality. I’d say this one is middle ground for capturing the original look. A nice touch which is hard to see here is that they got the red stripe in the middle of the stockings there. This photo shows him in a 1909 uniform, except it is missing the PBC interlocking logo on the sleeve. That may have been done because 1909 was the last year for that logo and this card came out five years later, or it just might be the angle. This same photo used for the artwork was used on a 1912 card and numerous 1916 cards, except all of those used the actual photo. 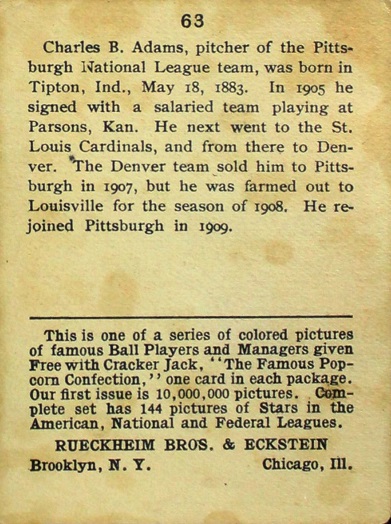 It’s interesting to see the reference to a minor league team as being a “salaried team”. Adams won 21 games that season, which was his first in pro ball. He was in the majors by the start of the 1906 season, but that lasted just one game for the St Louis Cardinals. That game ended up being his only big league game that wasn’t played for the Pirates. He spent 18 years in Pittsburgh, though that stretch was over 20 seasons because he was in the minors for all of 1908 and all of 1917. Adams pitched very poorly in the 1916 season, posting a 5.72 ERA during the deadball era. He came back by the middle of 1918 and had a second career in the majors, winning 81 games after returning at 36 years old.