With ten former Pittsburgh Pirates born on May 17th, as well as two significant trades made with the St Louis Cardinals, there were plenty of player options to match up to the This Date in Pittsburgh Pirates History article. I decided to go for a player who hasn’t been here before, and in the process I also found him on a set that hasn’t been used here yet as well.

Hal Carlson had a 14-year career in the majors that began with the Pirates during one of their worst seasons ever. The 1917 Pirates were really bad, losing over 100 games back when they didn’t play 162 games in a season. He had a nice debut though, going 7-11, 2.90 161.1 innings as a 25-year-old. The ERA sounds very good for a rookie, but it was the peak of the deadball era, so it was actually a below average number. By 1919, he put up a 2.23 ERA, which was very impressive because the league ERA was on the slow rise at the time. However, rules changed in baseball in the upcoming years, where new baseballs were put in play much more often, which led to better offense and Carlson did not finish his time in Pittsburgh strong. He was a spitball pitcher, who wasn’t able to throw his main pitch anymore.

This 1923 Willard Chocolate card was put out at around the same time that his seven-year stint in Pittsburgh was wrapping up. He finished with a 42-55, 3.64 record in 829.1 innings with the Pirates. He ended up playing another seven seasons in the majors and compiled 114 wins and just over 2,000 innings pitched. His career ended tragically, as he passed away during the 1930 season after becoming ill. This 180-card set was produced by a chocolate manufacturer in Canada and they are somewhat difficult to find. It’s a tough set to put together one-by-one because most cards in the set aren’t available for sale at certain times. Here’s a look at the Carlson card from that set. 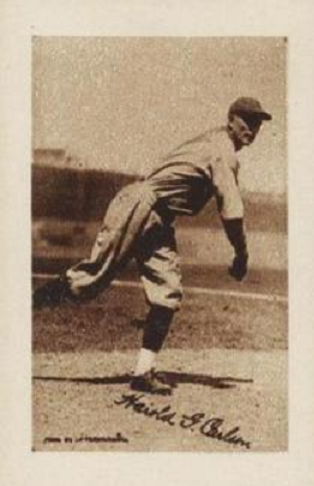 I couldn’t get the best quality scan, but also, this particular set didn’t have the best quality photos. Even a good scan doesn’t look much better than what you see above. It’s definitely not a set that you would say has eye appeal. It’s also not a unique card in that there’s another 1923 set called Curtis Ireland that was produced in the U.S. and it uses the same photos and front design. Those cards have ads on the back, which is the easy way to tell the difference. They only real design here is the facsimile autograph by his foot. The writing near the bottom corner, which is difficult to read in person as well, says “photos by international”.

You can tell why these cards aren’t extremely popular, besides the fact that they are somewhat rare. It’s a boring design with over-sized borders (the cards measure about 2” x 3-1/4”) and poor photo quality on many cards. They also have poor quality control, as the photo part isn’t always centered in the white border. Despite the flaws, I’m still a fan of these old sets that use real photos because there aren’t enough of those photos still around.

There’s only one option for this card on Ebay right now. It’s not the card scanned above, because this scan actually came out better. The Ebay one is in a PSA 4 holder and the price is $250, with free shipping and a best offer option. I tried to get a good idea on price to see if that was good or not and it’s hard to pin down prices with this set because there aren’t many sales. Other commons in similar shape have ended under $100, but a PSA 5 of a common player were for over $350. If you want it, I’d say make an offer on it and see how well you can do on a discount to protect your investment.